This February 2018 video says about itself:

Yemeni children held a protest vigil outside the United Nations building in Sanaa, Tuesday, to demand a halt to the war and a return to regular food and aid supplies into the country. One of the young protesters said: “we come to demand that the United Nations stop the [Saudi-led coalition] siege of Yemen so that we can go back to our schools.” He added: “Saudi Arabia says it sends us flour and wheat, but it sends us missiles, [and] bombs Yemen, houses, mosques, and everything else.”

By Tim Rivers in the USA:

On Saturday a demonstration of about 100 people heard speakers denounce US support for the Saudi-led genocidal war against Yemen in front of the Henry Ford Memorial Library in Dearborn, Michigan, a Detroit suburb that is home to the largest Arab-American community in the United States.

Students from Dearborn High School and Wayne State University joined autoworkers from nearby Ford factories and other residents of the community to denounce the blood-drenched Saudi regime and its continuing onslaught against the defenseless population of Yemen. “I am here because every rational human being is against war, against killing innocent human beings, especially those who are defenseless and poor”, said Anaya. “These are the poorest people in the world. For what reason?

“For the criminal Saudi regime it is all about power and money. I oppose the war in Yemen. I know it is economically motivated. The Saudi regime exchanges oil for weapons, and those weapons are used against my people in Yemen.”

The United Nations calls Yemen the world’s worst humanitarian disaster, with 14 million of the country’s 29 million people facing starvation, the direct result of a punishing naval blockade enforced by Saudi Arabia and the US.

According to the charity Save the Children, an estimated 85,000 children have starved to death during the four years of war. Nearly 100 civilians were either killed or wounded every week in Yemen last year, with children accounting for one-fifth of all casualties, the UN reports. 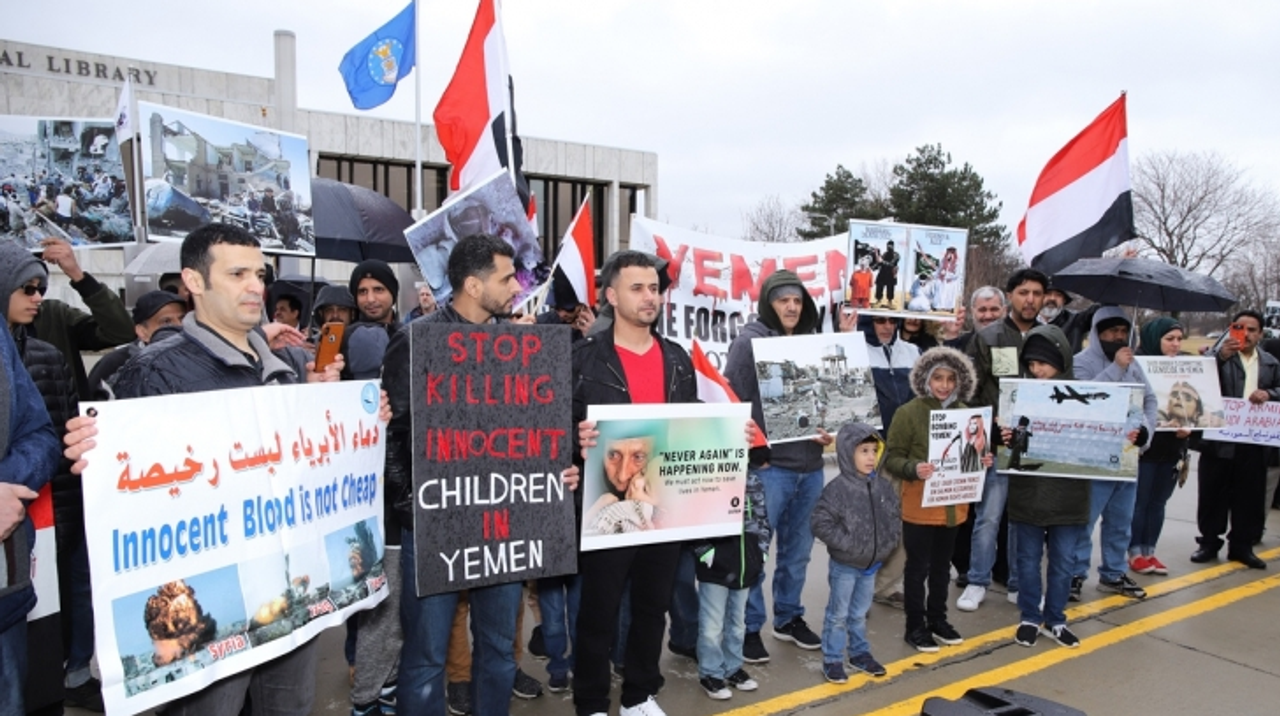 Members of the Socialist Equality Party (SEP) and the International Youth and Students for Social Equality (IYSSE) received a warm reception from the demonstrators who gathered under umbrellas in a drizzling rain. IYSSE members distributed copies of the WSWS Autoworker Newsletter and a leaflet promoting the upcoming meetings at Wayne State University in Detroit and the University of Michigan in Ann Arbor entitled “The threat of fascism and how to fight it”, featuring Christoph Vandreier, a prominent leader of the fight against fascism in Germany and deputy national secretary of the Socialist Equality Party (Germany).

“I am of Yemeni descent”, Nuha told the WSWS. “I was born here, but when I was visiting family in Yemen, every night we would hear Saudi aircraft. We would hear the bombing in distant cities.

“Something really terrible happened while I was there. A funeral was bombed, and hundreds of people were killed. 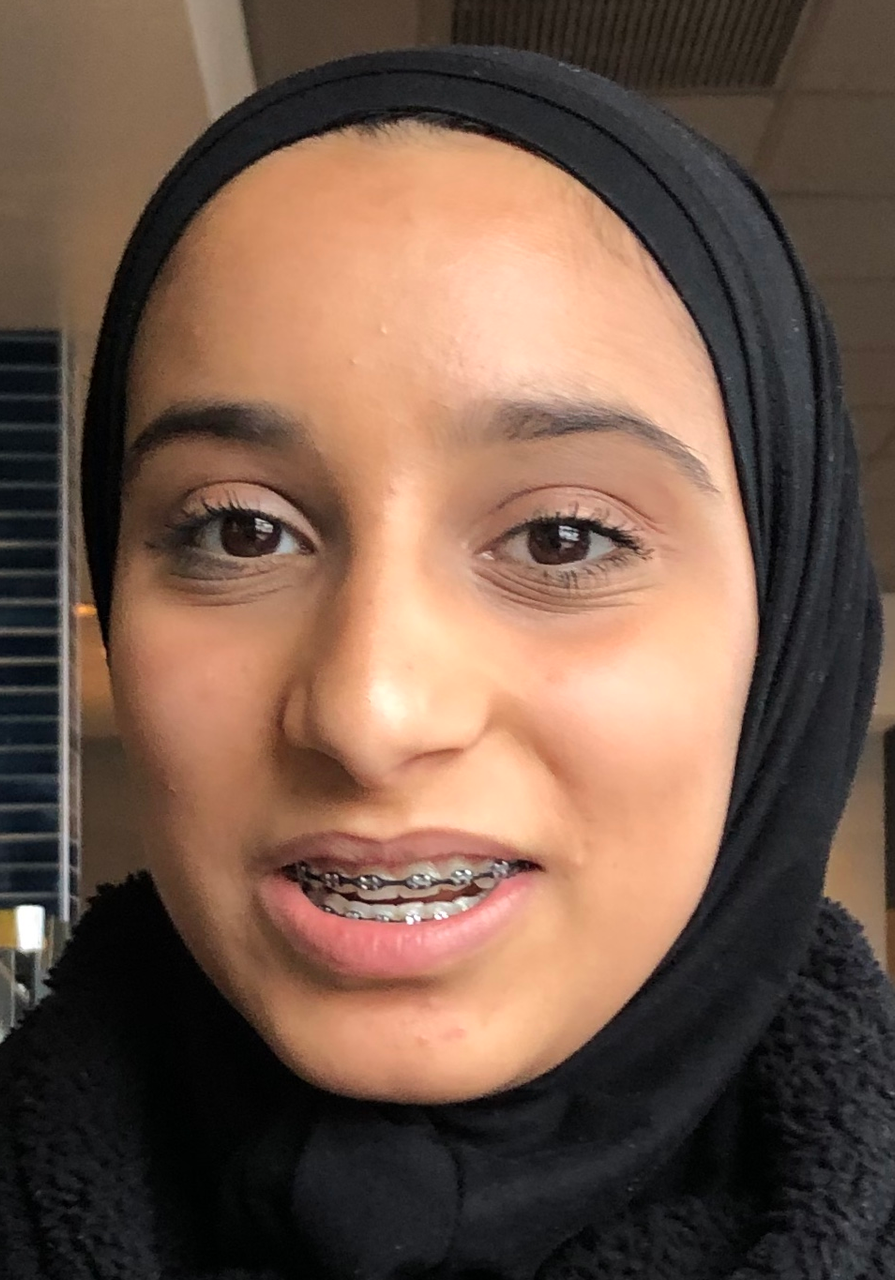 “You don’t see these headlines in America because they are funding Saudi Arabia. It is good to see that there is a campaign against it.”

Our reporters explained the SEP’s international fight for the freedom of journalist Julian Assange, trapped in the Ecuadorian embassy in London, and whistleblower Chelsea Manning, imprisoned in solitary confinement for refusing to testify against Assange, and the parallel campaign against internet censorship.

“I would not think of London, England as being involved in censorship. I would think of America, yes, but not England… Thank you for this.”

A report by the US-based University Network for Human Rights (UNHR) and the Yemeni monitoring group Mwatana documented more than 19,000 bombing raids that have been carried out in the Saudi-led assault on Yemen. Since the start of the war, the UK alone has sold at least £5.7 billion worth of arms to the Saudi coalition.

Hospitals, airports, ports, bridges and roads have all been repeatedly attacked. So, too, have farms, schools, oil and gas facilities, factories and private businesses. Yemen’s civilian, economic and medical infrastructures have been pushed to the brink of collapse. The worst cholera outbreak on record, with more than 1 million infections and 2,500 deaths, has been raging since 2016.

Thousands of people are starving to death and dying from preventable diseases, while an average of eight civilians die from bombs and bullets every day, based on data collected by the Yemen Data Project.

Under Obama the US military provided midair refueling of Saudi warplanes so that they could continue nonstop bombing of schools, hospitals, vital infrastructure and residential neighborhoods, while offering intelligence, targeting information and US naval support for a deadly blockade of the impoverished country.

In a report from September 2016, Reuters revealed that the Obama administration offered Saudi Arabia more than $115 billion in weapons, other military equipment and training—a figure which exceeded all previous U.S. administrations in the 71-year history of the U.S.-Saudi alliance.

The multiple arms on offer included everything from small arms and ammunition to tanks, attack helicopters, air-to-ground missiles, missile defense ships, and warships. Washington also provides maintenance and training to Saudi security forces. The Control Arms Coalition, a group that campaigns for stricter arms sales controls, said at the time that Britain, France and the United States were flouting the 2014 Arms Trade treaty, which bans exports of conventional weapons that fuel human rights violations or war crimes.

For example, on March 15, 2016, the coalition bombed a crowded market in northwestern Yemen, killing at least 97 civilians, including 25 children. Human Rights Watch determined that the attack was conducted with a GBU-31 satellite-guided bomb, which consists of an MK-84 2000-pound bomb and a JDAM satellite guidance kit, both of which the US supplied. The US and the UK have also sold cluster munitions to Saudi Arabia, which release scores of submunitions that can detonate much later and kill civilians. 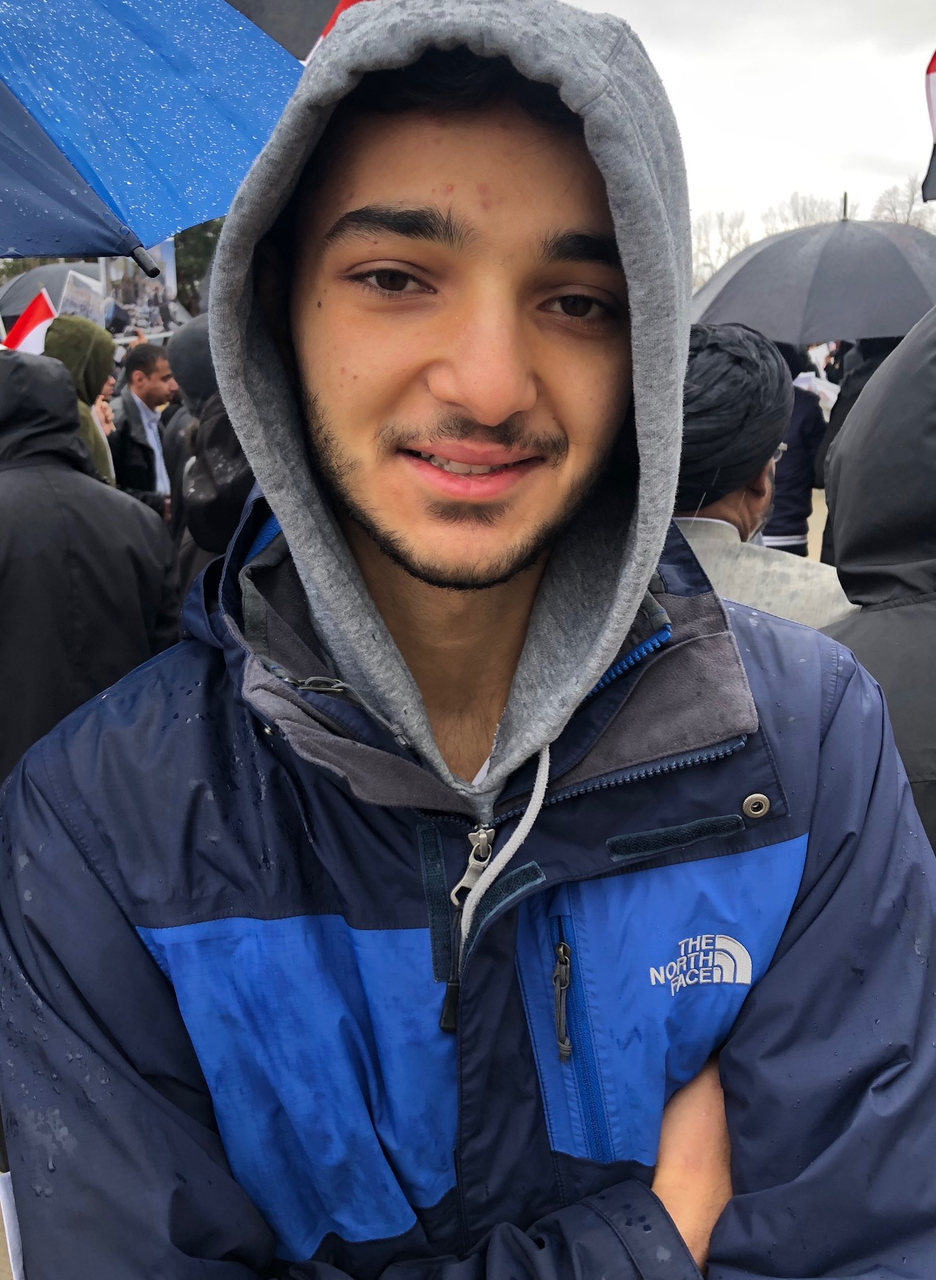 “I am shocked that this can be a reality,” said Karim, a junior at Dearborn High School. “Oppression, atrocities and no one is doing anything about it. We are supposed to be the greatest country in the world. Why are we supporting the people who are causing this to happen?

WSWS reporters discussed the class struggle, the need for revolutionary leadership in the working class and the upcoming meetings on the fight against fascism at the University of Michigan and Wayne State University. He welcomed the invitation.

“Anything that will truly help people and doesn’t have a hidden agenda. Yes, I will support that. What power does the government have without the people? If we stand together, nobody will have a greater power than us. If that is the means of uniting people against war, then we have got to do that.”

When a member of the SEP was invited to address the rally, he explained that both Democrats and Republicans had voted for the Pentagon’s massive budget and supported US wars in the Middle East. Both parties of American capitalism support the Saudi regime in its conduct of the genocide against the people of Yemen. While Donald Trump is the most hated president in American history, and the vast majority of the American people are deeply hostile to the wars being conducted by his government, he explained that it was critical to understand that to bring an end to the war, it was necessary to mobilize the working class independently of both parties of big business in struggle against capitalism, which is the source of war.

The protesters who spoke to the WSWS were horrified and often confused by the atrocities that are taking place in Yemen.

“I can’t believe how this could be happening,” said Ziyad, a student at Wayne State University. “I want to fight against this war.”

Jafri worked at General Motors 44 years. He was … eager to find a way to mobilize workers more broadly against war. … “The working class does not want war. What person would?”

17 thoughts on “American protest against Saudi-Trump war on Yemen”