Footage filmed on Wednesday shows hundreds of migrant families from Central America being held in a pen beneath an underpass, in El Paso, Texas, as they were waiting to be processed by US immigration officials. The makeshift encampment was set up in a parking lot of a Border Patrol station, beneath the Paso del Norte Bridge. Footage shows migrants cramped in the encampment, behind a fence and razor wire.

US detaining immigrants under highway overpass in Texas amid renewed crackdown

US Customs and Border Protection (CBP) is unleashing a massive crackdown on Central American immigrants attempting to cross the US-Mexico border. According to CBP figures, the agency made 66,450 border arrests in February, the highest monthly total in years. 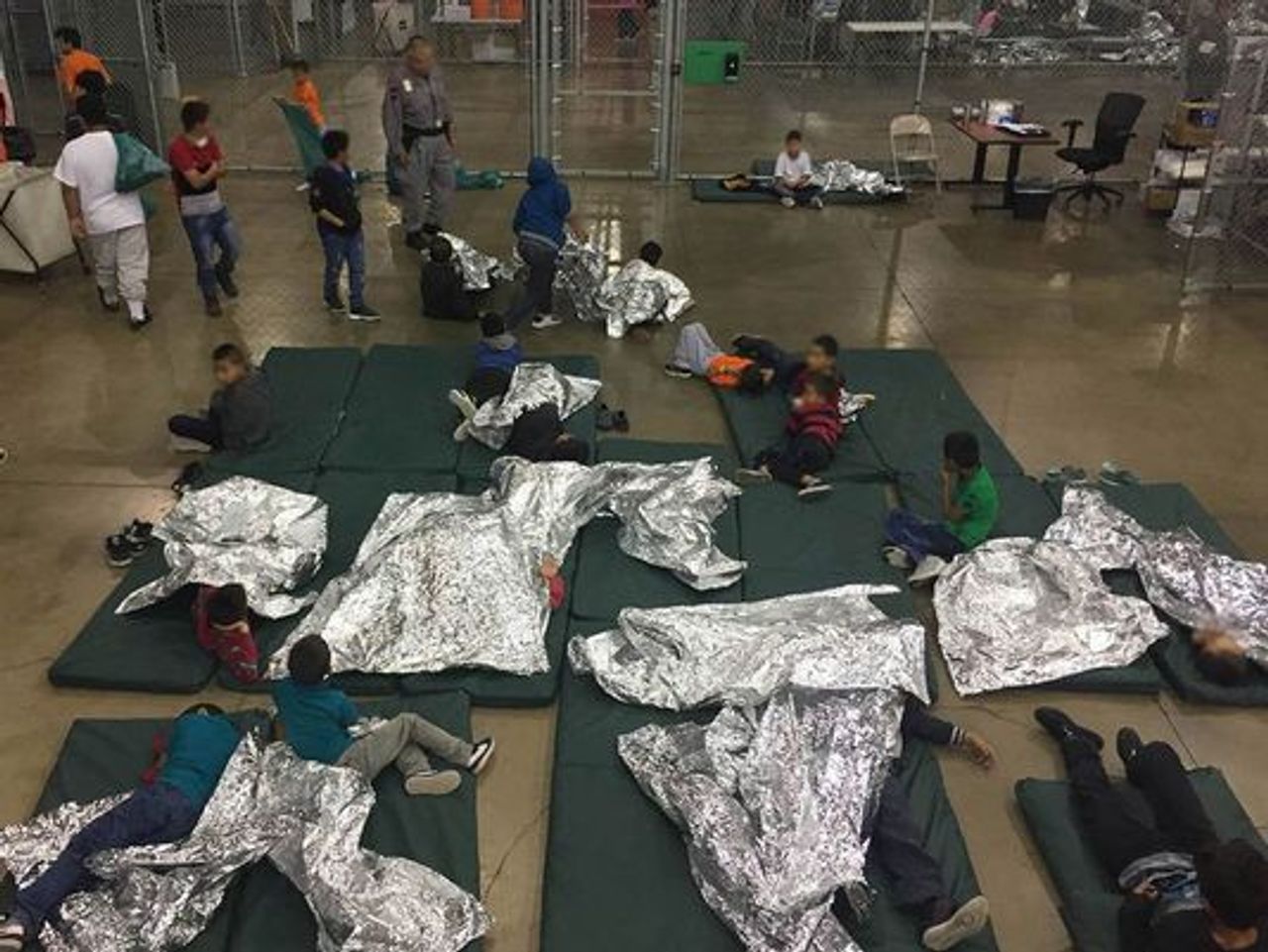 The border region has been placed under military occupation and is turning into a legal no man’s land. Video and images released Wednesday show immigrants being detained underneath an overpass in El Paso, Texas. In the images, hundreds of immigrants huddled behind barbed wire appear beneath a freeway surrounded by trash and armed guards. The decision to hold immigrants under an overpass is a calculated, provocative maneuver. Trump, emboldened by the collapse of the Democratic Party-led Russia witch-hunt, is giving the green light to his fascistic supporters within the military and immigration agencies who are demanding a dramatic expansion of the network of immigrant internment camps across the US.

Late yesterday, NBC News reported that the Department of Homeland Security (DHS) will imminently ask Congress to provide billions of dollars in emergency funding for detention centers, including those specifically intended to jail thousands of children. Immigrant children, the DHS letter complains, cannot be “expeditiously removed” due to “outdated laws” and “resource constraints”. The letter blames protections for immigrant children as a “pull factor” that encourages immigration. “We are witnessing the real-time dissolution of the immigration system”, the letter states, warning of a “system-wide meltdown”.

The DHS letter calls for granting “emergency” authority “to restore order” and “stem the historic flows” of immigrants, including through the elimination of legal protections for detained immigrants, the building of “temporary processing facilities” and the deployment of “at least hundreds of additional personnel to support CBP and ICE.”

The government is currently holding over 1,300 children without their parents in cold “holding cells”, including over 250 who are under the age of 12. This does not include the 12,000 children who are dispersed throughout the country at longer-term child detention centers. The Trump administration also recently requested that the military agree to hold 5,000 children at Goodfellow Air Force Base outside of San Angelo, Texas.

The Washington Post reported that the detainees in cramped internment camps have “a variety of ailments and communicable diseases”. Many of the migrants are “seriously ill”, the Post wrote, “including infants with 105-degree fevers, a 2-year-old suffering seizures in the desert, a 19-year-old woman with a congenital heart defect who needs emergency surgery and a 40-year-old man suffering from multiple organ failure.” ICE recently acknowledged it had detained over 2,500 pregnant women since 2016.

On Wednesday, Trump took to Twitter to denounce Mexico and Central American countries for “doing NOTHING to help stop the flow of illegal immigrants to our country…The Dems don’t care, such BAD laws. May close the Southern Border!”

At a rally yesterday night in Grand Rapids, Michigan, Trump declared: “National emergency it is. If you look at the border, and you look at the hundreds of thousands of people who are invading our country… We are building it very rapidly.” Earlier this week, Trump successfully earmarked $1 billion for wall construction in Texas and Arizona.

The scale of the border crackdown is without precedent. In the first four months of the current fiscal year, CBP arrested 136,150 people who crossed the border as families, far surpassing the 107,212 “family units” arrested during the entirety of the last fiscal year, which broke the prior record for the most family arrests in history.

Roughly 4,700 soldiers remain deployed at the US-Mexico border on the orders of President Trump. Speaking before the Senate Armed Services Committee Tuesday, Army Chief of Staff Mark Milley supported the deployment of troops to the border, saying it did not detract from “force readiness”.

Despite the Trump administration’s claims that the military is playing only a technical role, those units deployed include the 1st Battalion, 37th Field Artillery Regiment, the Marines’ 1st Light Armored Reconnaissance Battalion, the 505th Military Intelligence Brigade, the 3rd Combat Aviation Brigade, the Weapons Company, 2nd Battalion, 5th Marine Regiment, and more. Trump has consistently referred to immigration as an “invasion” and last year said soldiers would be able to “shoot” immigrants at the border.

In addition, the Trump administration is attempting to deputize officials from non-immigration agencies to travel to the border and engage in the ongoing mass roundups.

The Post reported that Department of Homeland Security Secretary Kirstjen Nielsen “is readying a plan to ask volunteers from the US Coast Guard, Transportation Security Administration and other Homeland Security Agencies to go to the border to help with the flood of Central American families.” One official told the Post: “We are burning red hot right now, and we are looking everywhere for help.”

The attacks on immigrants and democratic rights take place with no real opposition from the Democratic Party, which opposed efforts to stop Trump’s long-planned efforts to expand the immigration internment camp network constructed under Democratic President Barack Obama.

The fact that so many families are escaping Central America despite Trump’s fascistic anti-immigrant program testifies to the degree of the social devastation wrought by US imperialism over the past century of corporate exploitation of the region.

Earlier this week, the Trump administration reached a new agreement with several Central American countries to fund police and military operations aimed at stemming the flow of immigration. In reality, such agreements will only further fund US-backed death squads that roam the countries, collaborate with drug cartels and protect the rule of corrupt national bourgeoisies in the most unequal region in the world.

The US government’s attacks on immigrant workers in the US and Central America is an attack on the international working class. In the midst of a growth of the class struggle on a world scale, American finance capital is expanding its international military-police-intelligence apparatus aimed at suppressing the class struggle and protecting the profits of US corporations through brute force.

According to leaked documents provided to local San Diego news station NBC 7, a government database has been targeting journalists and activists at the southern US border. As news has spread of the operation many other groups and organizations have also spoken of increased surveillance and harassment by the Border Patrol, ICE, and other government agencies for covering immigration in Mexico: here.

ICE arrest foiled by activist who knows the law.

At a staged media event in Calexico, California on the US-Mexico border, President Donald Trump on Friday reiterated his intention to build a border wall, defended his declaration of a national emergency to bypass Congress in funding the reactionary project, said he would deploy more troops to militarize the region, and called the attempts of refugees from Central America to gain asylum in the US “a scam”: here.