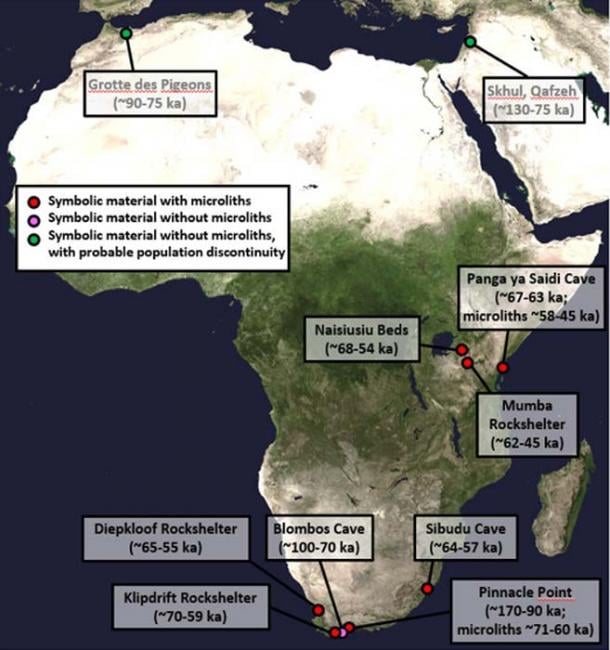 From the University of Huddersfield in England:

Summary: The work confirms a dispersal of Homo sapiens from southern to eastern Africa immediately preceded the out-of-Africa migration.

Modern Homo sapiens first arose in Africa more than 300,000 years ago, but there is great controversy amongst scholars about whether the earliest such people would have been ‘just like us’ in their mental capacities — in the sense that, if they were brought up in a family from Yorkshire today, for example, would they be indistinguishable from the rest of the population? Nevertheless, archaeologists believe that people very like us were living in small communities in an Ice Age refuge on the South African coast by at least 100,000 years ago.

Between around 100,000 and 70,000 years ago, these people left plentiful evidence that they were thinking and behaving like modern humans — evidence for symbolism, such as the use of pigments (probably for body painting), drawings and engravings, shell beads, and tiny stone tools called microliths that might have been part of bows and arrows. Some of this evidence for what some archaeologists call “modern human behaviour” goes back even further, to more than 150,000 years.

But if these achievements somehow made these people special, suggesting a direct line to the people of today, the genetics of their modern “Khoi-San” descendants in southern Africa doesn’t seem to bear this out. Our genomes imply that almost all modern non-Africans from all over the world — and indeed most Africans too — are derived from a small group of people living not in South Africa but in East Africa, around 60,000-70,000 years ago. There’s been no sign so far that southern Africans contributed to the huge expansion of Homo sapiens out of Africa and across the world that took place around that time.

That is, until now. The Huddersfield-Minho team of geneticists, led by Professor Martin Richards at Huddersfield and Dr Pedro Soares in Braga, along with the eminent Cambridge archaeologist Professor Sir Paul Mellars, have studied the maternally-inherited mitochondrial DNA from Africans in unprecedented detail, and have identified a clear signal of a small-scale migration from South Africa to East Africa that took place at just that time, around 65,000 years ago. The signal is only evident today in the mitochondrial DNA. In the rest of the genome, it seems to have been eroded away to nothing by recombination — the reshuffling of chromosomal genes between parents every generation, which doesn’t affect the mitochondrial DNA — in the intervening millennia.

The migration signal makes good sense in terms of climate. For most of the last few hundred years, different parts of Africa have been out of step with each other in terms of the aridity of the climate. Only for a brief period at 60,000-70,000 years ago was there a window during which the continent as a whole experienced sufficient moisture to open up a corridor between the south and the east. And intriguingly, it was around 65,000 years ago that some of the signs of symbolism and technological complexity seen earlier in South Africa start to appear in the east.

The identification of this signal opens up the possibility that a migration of a small group of people from South Africa towards the east around 65,000 years ago transmitted aspects of their sophisticated modern human culture to people in East Africa. Those East African people were biologically little different from the South Africans — they were all modern Homo sapiens, their brains were just as advanced and they were undoubtedly cognitively ready to receive the benefits of the new ideas and upgrade. But the way it happened might not have been so very different from a modern isolated stone-age culture encountering and embracing western civilization today.

In any case, it looks as if something happened when the groups from the South encountered the East, with the upshot being the greatest diaspora of Homo sapiens ever known — both throughout Africa and out of Africa to settle much of Eurasia and as far as Australia within the space of only a few thousand years.

Professor Mellars commented: “This work shows that the combination of genetics and archaeology working together can lead to significant advances in our understanding of the origins of Homo sapiens.”