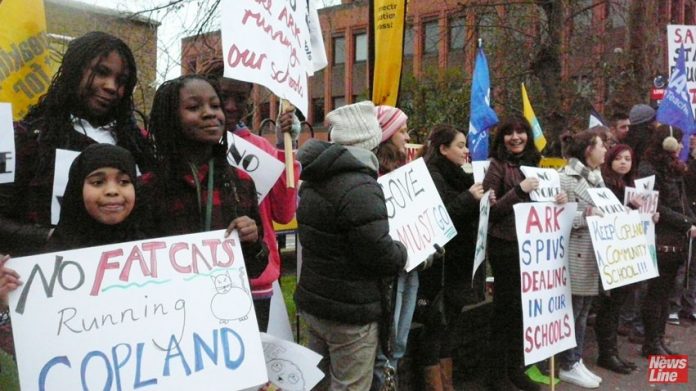 PHILANTHROPY IS PROMOTING THE PRIVATISATION OF EDUCATION

‘[In sheep’s clothing]: Philanthropy [and] the privatisation of the ‘democratic’ state: who needs a Ministry of Education?’ ironically ask the authors of a new report which sheds light on the unprecedented role of ‘philanthropic’ actors in education policy-making.

The report, launched by Education International (EI), the global education union confederation, lifts the lid on the activities of so-called philanthropic organisations involved in promoting the commercialisation, marketisation and privatisation of education systems around the world.

A growing number of philanthropic organisations are self-assuming roles, bypassing the scrutiny and accountability that governments and elected officials are subject to. These roles range from the direct provision of education services to the involvement in policy design, as well as network building in order to promote and implement specific policy ideas.

The report, In sheep’s clothing: Philanthropy and the privatisation of the ‘democratic’ state, raises questions about a potential conflict of interest as a result of the dual role of philanthropic organisations as both advocates and beneficiaries of specific educational reforms.

Epitomising this trend, the report puts the spotlight on the practices of UK charity Absolute Return for Kids (Ark) in promoting the privatisation of education in the UK and beyond, including countries such as India, Liberia, South Africa, Uganda, Kenya, Ghana, Tanzania, the Philippines and Brazil.

Following on from its involvement in a controversial privatisation programme in Liberia – in which Ark advised the government in overall programme design and contract structure, Ark is currently advising the Ghanaian government to introduce a similar public private partnership (PPP) programme – the Ghana Partnership Schools project.

The Liberian government’s own commissioned report found that its PPP programme was not cost effective, unsustainable and not without negative consequences to surrounding schools. Thousands of children were pushed out of their local schools as a result of this experiment.

Reports on the development of a similar programme in Ghana have been met by strong opposition from teachers who have served notice they will resist any attempt by the government to privatise, commercialise and commodify public education in the country.

Christian Addai-Poku, President of Education International African Regional Committee, stated: ‘These organisations do not come to Africa for altruistic purposes. ‘With little regard for both local contexts and stakeholders, they seek to impose privatisation agendas by bringing considerable financial and “political” influence to bear upon governments in Africa.’

General Secretary of Education International, David Edwards, stated: ‘Of great concern is the uncritical approach to some policy initiatives and programmes that are being presented by Ark as models to be exported. ‘The academy school model promoted by Ark is not without controversy or scandal in the UK.

‘It is crucial for organisations exporting such policies to deal with criticisms they generate domestically before embarking on moving them abroad.’ The launch of the research In sheep’s clothing: Philanthropy and the privatisation of the ‘democratic’ state by A Olmedo & C Junemann, takes place today, Wednesday, 20th March, at 14:30 pm-16.30pm at UCL Institute of Education, Room W2.05 20 Bedford Way, London WC1.

In addition to Christian Addai-Poku, present at the launch will be David Ofori Acheampong, General Secretary GNAT and Eric Kofi Agbe Carbonu, President NAGRAT who will speak on Ark’s promotion of PPPs in Ghana.

The report examines the rationale and modus operandi of philanthropic edu-business.

The second part of the report focuses on the global activities of UK registered Absolute Return for Kids (Ark), an academy sponsor which runs 38 schools in Birmingham, Hastings, London and Portsmouth.

It analyses Ark’s roles and activities in education systems globally including through the direct provision of education, curriculum development, teacher training, enabling the development of education markets, network building and advocacy, school accountability and more.

Kevin Courtney, Joint General Secretary of the National Education Union (NEU), said: ‘This important report makes clear that the commercialisation, marketisation and privatisation of education is a global ambition. ‘Ark has been a leading proponent of privatisation in and of education in England through its academy programme, maths mastery curriculum and teacher training initiatives. ‘This report sheds important light on Ark’s involvement in edu-business on a global scale.

‘Education is a multi-billion-pound business opportunity for those who seek to turn a profit. ‘Privateers, hiding beneath the cloak of philanthropy, are a serious threat to the EI’s goal of achieving free quality public education for all across the world. ‘The NEU and its sister unions in EI understand the importance of education for the public good and we will continue to work together to defend the rights of all children to a high-quality education, free at the point of use, and untarnished by corporate greed.’

• Commenting on the results of a YouGov survey commissioned by More than a Score, released on Monday, which shows the level of school leaders’ frustrations with the government’s assessment regime, Dr Mary Bousted, the other Joint General Secretary of the NEU, said: ‘The results of this survey demonstrate that the assessment system imposed on primary schools is neither liked nor trusted by school leaders.

‘We hear continually from the Department for Education and from Ofsted that they want to improve the quality of primary education and lessen the stress on pupils and teachers. ‘But, as long as government clings on to the discredited SATs-based system, significant change will not be possible.

‘Teachers want to work in schools where pupils are challenged, delighted, supported and engaged by their learning – it is a scandal and a tragedy that government policy frustrates these aspirations.’

• Seven Jersey schools were closed yesterday as teachers belonging to the National Education Union (NEU) went on strike following their rejection of the latest States Employment Board (SEB) offer. Andy Woolley, NEU Regional Secretary, said: ‘We informed the States last weekend that there was an overwhelming rejection of their offer of just the Retail Price Index rise plus 1.3% for 2020 with no change to 2018 and 2019 when the imposed awards were well below inflation.

‘Members have contacted us to confirm that they feel it is unacceptable to still have a fall in their standard of living over the three years.’ Members of the NASUWT sister teachers’ union in Jersey have also overwhelmingly rejected the latest SEB pay offer.

They are particularly angry about the imposition by the SEB of an inadequate pay award for 2018 and 2019 and the SEB’s refusal to even discuss improvements on the imposed award. In the light of the SEB’s intransigence the union has announced a day of strike action on 26 March 2019.

Chris Keates, NASUWT General Secretary, said: ‘Our National Action Committee met today and considered the feedback from members on the latest pay offer. The depth of anger about the offer was evident.

‘Despite our best efforts, the SEB has failed to engage meaningfully in the negotiations.

‘Discussions too often are peppered with threats to withdraw offers on the table if certain, unreasonable, conditions are not met.

‘Our members are angry and disillusioned that the SEB does not appear to value their contribution and the work they do for the children and young people of Jersey.

‘In the light of the response from members to the latest offer, we have no alternative but to reinstate the strike action and have given notice to the SEB of an initial day of action on 26 March 2019.

‘The NASUWT is committed to securing a negotiated outcome with the SEB and avoid the disruption to pupils and parents, but they need to come back to the negotiating table genuinely willing to engage on the whole pay award, to have meaningful discussions and to make an improved offer.’

• Tory-led Wandsworth Council in south London are currently ‘planning major changes’ to the way that provision for children with a diagnosed Autistic Spectrum Disorder and/or Social Communication is organised and funded in the borough. The Council wants to cut Specialist Teachers in the Advisory Teams from nine to three, make up to 13 experienced professionals redundant, and require the new team to focus primarily on clearing the backlog of diagnoses rather than supporting children in schools and early years settings.

This will hugely reduce the support available for children, their families and teachers.

Wandsworth Council claim that the same budget will go to the new service as now, but they are forced to acknowledge that the number of children currently diagnosed with ASD has increased twofold in recent years – from one in every hundred children to more than two per hundred.