For the UN Anti-Racism Day against racism, Islamophobia, antisemitism and fascism, Stand Up To Racism group stopped at the New Zealand High Commission to send thoughts to those affected by the mosque shooting in Christchurch before marching between Hyde Park and Whitehall. Report by Habiba Khanom.

Anti-racism demo sees thousands take to the streets of London

THOUSANDS of people in Britain marched in unity against racism and fascism on yesterday following Friday’s murderous attack on Muslim worshippers in Christchurch, New Zealand, by a far-right adherent.

Demonstrators marched in Cardiff, Glasgow and London along with those in 60 cities across the world on United Nations Anti-Racism Day.

Stand Up To Racism co-convener Sabby Dhalu said the event had “a more sombre tone than previous years because of what happened in Christchurch. These types of hatred, terrorist attacks do not happen in a vacuum.

“There is a link between the hatred peddled by the politicians and the media and hate crimes on the streets and places of worship.”

London’s demonstrators assembled in Park Lane and marched to Downing Street, pausing to lay a wreath at New Zealand House.

Speaking at the rally in Whitehall, Labour’s shadow home secretary Diane Abbott said: “We have to fight fascism and white nationalism wherever it rears its head. And we have to fight the enablers of anti-Muslim hatred wherever we see them.

“We’re living through a very dark period, but together we can turn the tide.”

TUC general secretary Frances O’Grady told the throng that “now, more than ever” they must promote values of tolerance and diversity.

“Racism and fascism have no place in our society,” she said. “As trade unionists we’ll continue to stand up to the forces of hatred and division and won’t flinch in our campaign against the far right.”

“There is a direct connection between the rise of the far right, of racism and fascism, and the rise of inequality in this country, in Europe and across the world”, he said.

“And the best way of doing that is by joining a trade union, join the Labour Party, and getting behind the greatest anti-racist campaigner this country has seen in mainstream politics: Jeremy Corbyn.”

Mr Ward also read a message from Labour leader Mr Corbyn, which said: “We must stand together to defeat the message of hate that seeks to divide us. An attack on a mosque or a synagogue or a church or a temple is an attack on every single one of us.

“We should never forget the incredible contributions we achieve when communities come together. Then we can address the real problems — challenge poverty, inequality and racism, defeat austerity and tackle climate change.”

Protesters speak out at UN Anti-Racist Day rally in London

WSWS reporters spoke to some of those attending Saturday’s demonstration in London to mark the United Nations’ Anti-Racism Day. The march was held just hours after fascist terrorists murdered 50 people at two mosques in the New Zealand city of Christchurch. 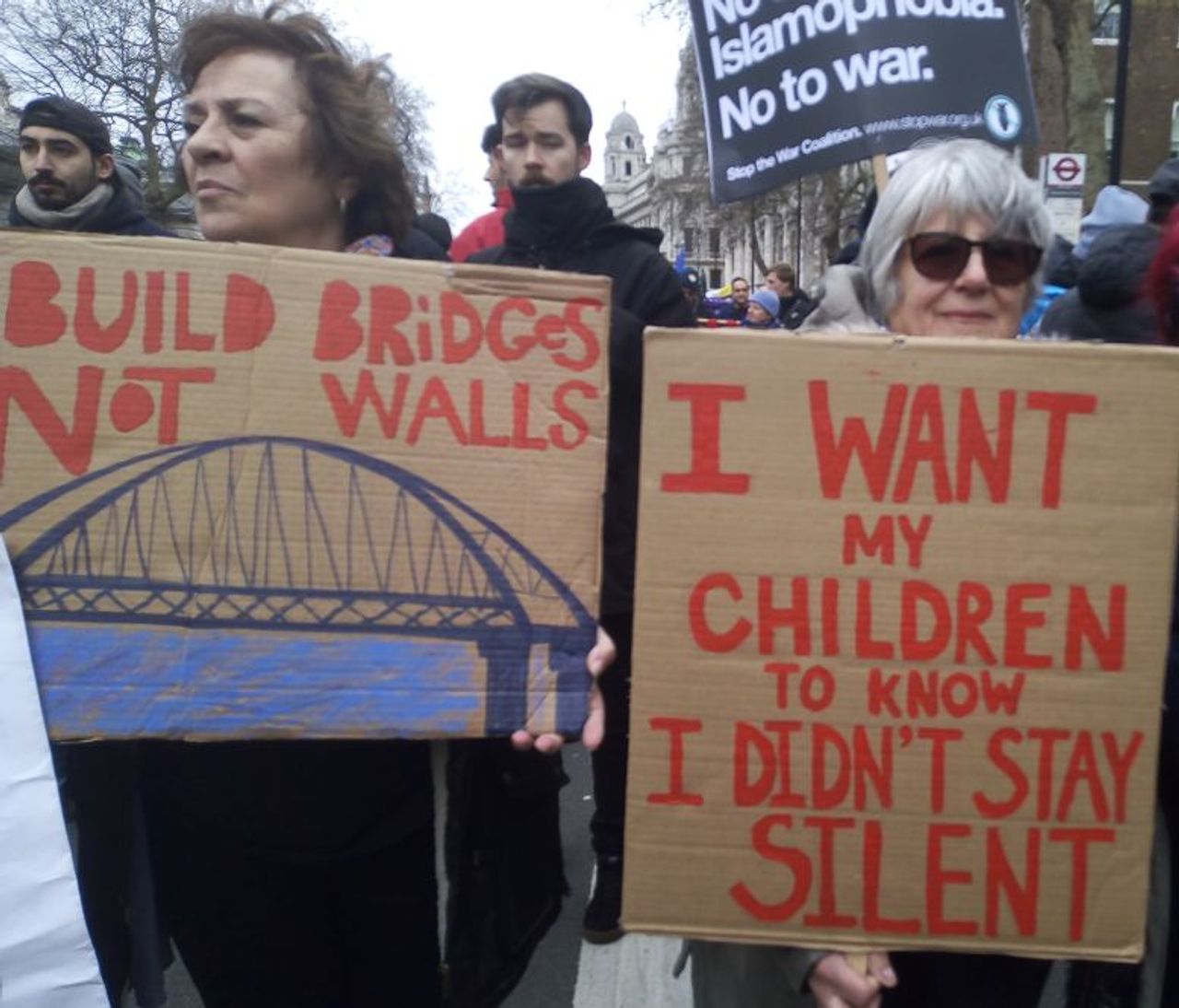 Stella and Ann are both retired. Stella said, “The reason I am here today is because I see fascism and racism growing not only in Britain but across the world, and I am going to stand for the minority, the refugees, for Grenfell [tower fire victims], for Windrush [immigrants in the UK]. That is why I’m here.”

Asked what she thought about the events in New Zealand, Stella said, “We are horrified, and we are upset and we need to stop Islamophobia, which is ripe in the Conservative Party. [Leading Conservative politician and former foreign secretary] Boris Johnson turned around and described Muslim women as letterboxes. How can you not tear people apart and have division when you have that type of person?

“I blame the conservatives for spreading it [Islamophobia]. Theresa May puts people in cages and sends them back to their own countries—they belong here. It is spreading hate and what happened in Christchurch could happen here in England. We stood with our Muslim brothers and sisters yesterday in a vigil. We will show our solidarity.”

A WSWS reporter explained that the crisis-ridden capitalist system globally was fuelling nationalism and the growth of far-right forces. Ann said, “I agree that capitalism is at the heart of it.

“The Western world [politicians] have done everything to place austerity measures at the door of the working class, which is the vast majority of the population. To bring austerity to bear to try to break our spirits—that is exactly what they have done. The division that exists between the very well off and those that have nothing is becoming wider and wider. That is why governments now are becoming terrified. They are scared that the spirit of the working class is coming together, and we will not be silenced.

Ann said, “War is one of the biggest money earners in this world and war is used to distract from what is happening in politics. How can UK Prime Minister Theresa May sit there in Downing Street and within 10 miles there are children going to bed hungry every night? They [the poor] don’t know what is coming the next day because they have ownership of nothing. It’s those people they want to oppress, and it is those people we are with.” 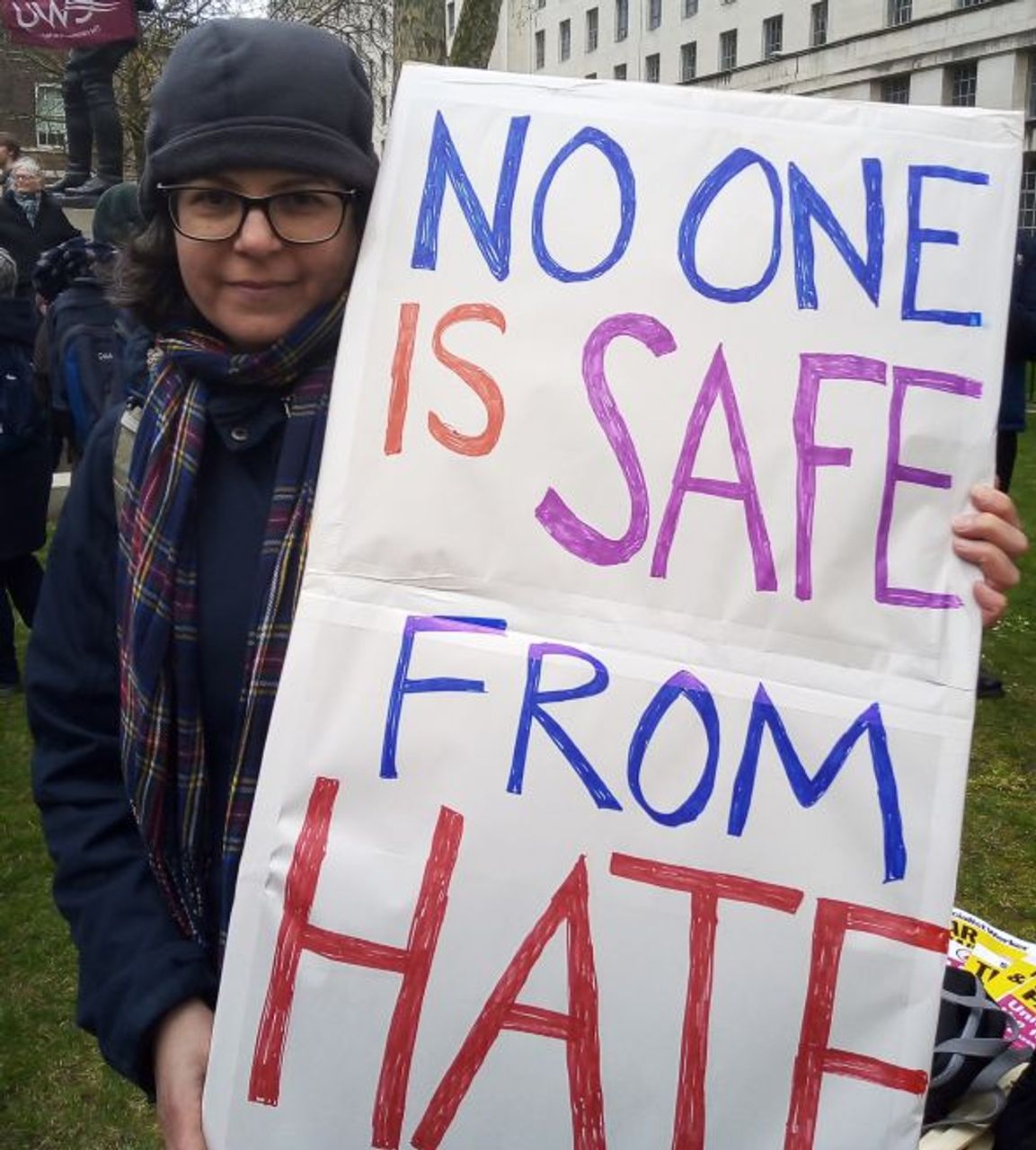 Nicole said, “I am very concerned about the direction the world is going in at the moment … The challenge is to keep the world safer. The last few years we have seen right-wing ideology being normalised, such as the Trump administration in my own country … With Brexit, we are in a precarious place in history.”

She was concerned about the growing levels of poverty, with a few billionaires controlling all the resources of the planet. “There is a big inequality gap that is widening and needs to be addressed, because greater inequality brings about instability in society.”

A WSWS reporter explained that there was a wave of historical falsification in German universities that has paved the way for the emergence of neo-fascist forces. Professor Jörg Baberowski at Humboldt University had played a critical role in this. The far-right Alternative for Germany was now the main opposition party in the Germany parliament.

Nicole said, “I can’t speak to the role of the government and academia in Germany, but I am horrified at the right coming to the fore in Germany.”

David is a history student at York University and has taught English in Turkey. He said, “I’m here today to stand up against the rise of racism and the criminalisation of refugees, asylum seekers and against the European Union’s governments’ appalling policies. I oppose the Home Office [in the UK] and the bureaucratic obstacles put in place, again and again, to stop people accessing their rights. 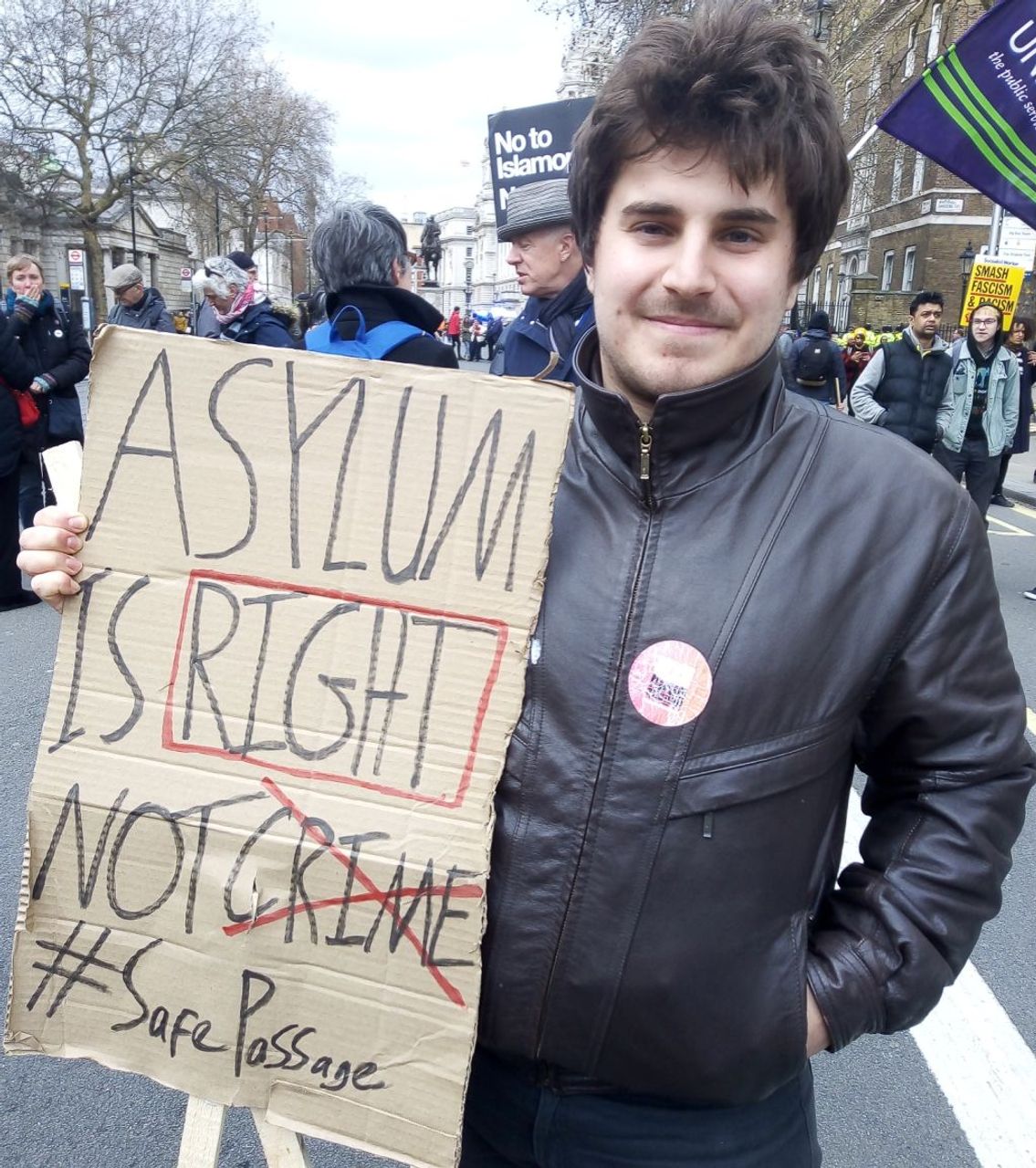 “I’m here to demand civil rights for refugees and asylum seekers, for the European Union to let search and rescue missions continue in the Mediterranean. One in nine people are drowning. The European Union has banned civilian vessels. I’m here to defend solidarity, let the vessels out, free the ships. And from personal experience of helping refugees in Turkey and Kurdistan, I’m saying we can’t allow the drownings to continue.”

“We have a tradition in this country of open borders, so anyone from anywhere can come and contribute.” Asked what he thought the reasons for this were, he said, “It’s been stopped by the rise of racism and the criminalisation of refugees, the rise of fascism, and blaming problems on them instead of on the inherent inequality in the system and austerity policies.

“We have to break out of the capitalist realism … We have to give people their inherent human rights and give civil rights to refugees who come from places where they haven’t got any. In Libya the European Union is forcibly returning people or paying the Libyan coast guard who’ve been known to shoot at people. It is unacceptable.”

Speaking about Libya and Syria, which have been devastated by imperialist inspired wars, David said, “They [the imperialist powers] only use the humanitarian banner when it suits them. We [UK governments] will not intervene unless it’s in our interests.”

Asked his views on the atrocity in Christchurch, David said, “It’s disgusting, and the fact is that several media outlets haven’t defined it as terrorism … A senator in Australia just after the shooting was blaming Muslim migration. This is disgusting. You don’t blame the victim for the shooting. If it’s a woman and she’s been raped, you blame the perpetrator. It’s these media outlets shifting the blame. When something happens they say, ‘We’ve got too many migrants.’ No one says, ‘We’ve got too many racists.’”

USA: Trump implored Fox News to “bring back” host Jeanine Pirro after her show was omitted from the Saturday night lineup following her Islamophobic remarks about the hijab worn by Muslim lawmaker Rep. Ilhan Omar (D-Minn.).