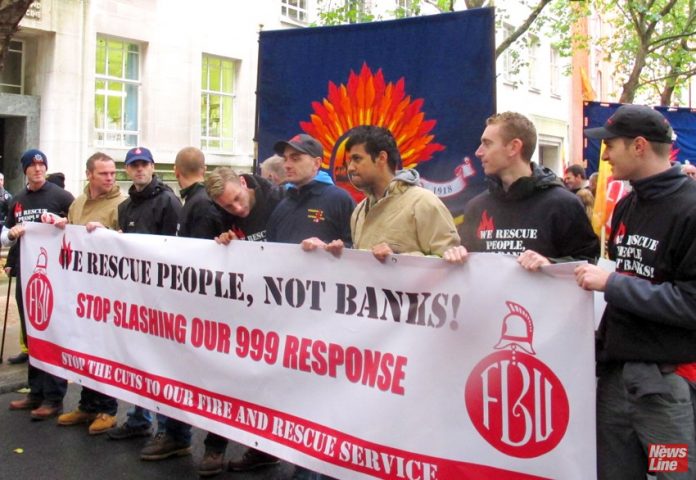 ‘THE SAFETY of firefighters and our communities is the Fire Brigade Union’s greatest concern,’ Gary Keary, FBU Brigade Secretary for Greater Manchester, said yesterday, ‘and we will oppose any attempt to reduce the minimum amount of firefighters riding an appliance from five to four.’

The full horror of the cuts to Manchester’s fire service has now come to light. A hundred support staff jobs will be axed, six fire stations closed, and the number of fire engines would be reduced by nine – from 56 to 47.

The hundred support staff are in the Unison trade union. And most controversial of all, the number of firefighters riding on all appliances across the region would reduce from five to four.

The FBU is firmly opposed to engines being crewed by just four firefighters. Keary said: ‘The Fire Brigades Union are opposed to all cuts to front line fire cover, this would include the closure of fire stations, the removal of fire appliances and the reduction of firefighters.

‘We have, for too long, seen the decimation of our fire service resulting from budget cuts and must fight against any further deterioration. The safety of firefighters and our communities are the Fire Brigade Union’s greatest concern.’

18 thoughts on “Dangerous cuts to firefighting in England”