This April 2016 video says about itself:

The presentation draws on the book The Global Education Industry, edited by Antoni Verger, Christopher Lubienski and Gita Steiner-Khamsi, and published by Routledge in January 2016.

The presenter argues that the current commercialization wave is fundamentally different from earlier waves of private-sector involvement in education. She discusses examples of how the global education industry has shaped the ways “effective education” (learning) is re-framed. She also discusses why new governance and finance models have surfaced – models that enable profit, an economy of scale, and a long-term “service contract” benefiting private-sector providers.

For a long time, critical educational researchers attempted to See[ing] Like a State (James G. Scott) in order to understand governmentality in education. The presenter proposes that we need to Calculate like a Business in order to explore the business logic underlying current trends in public education. 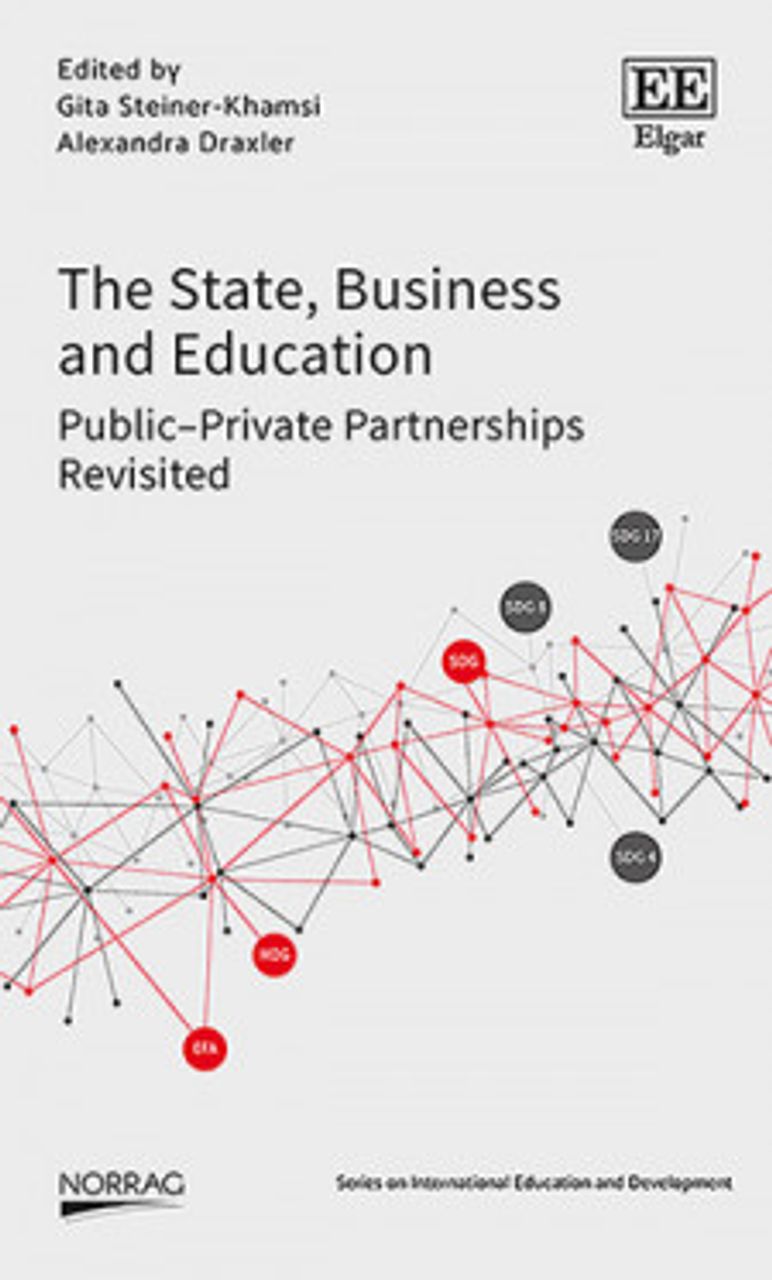 The State, Business and Education: How rapacious corporations are dismantling public education globally

The State, Business and Education documents the rapid growth of private schooling at the expense of public education globally.

Billionaires, key organisations such as the World Bank, global tech companies, think tanks and national governments are acting in concert to dismantle the basic social right to universal, free public education and impose a user-pays system.

The studies collected in this volume outline the various forms of privatisation taking place. These include Public Private Partnerships (PPP), voucher schemes, for-profit fee-based basic education and other forms of government support for the private sector.

The work pays particular attention to the “substantial” role of the International Monetary Fund, the World Bank, USAID, the UK’s Department for International Development (DFID) and other international and bilateral agencies in disseminating and funding privatisation policies.

The book chronicles how the role of the state has increasingly been reduced to standard-setting and benchmark monitoring. Standardisation, the writers explain, was a necessary condition for business to profitably enter the education market. Thereafter major corporations further modularised education to lower production and delivery costs for their products and services, and to increase the number of customers.

The authors note the cynical pitch used to sell the destructive education policies, employing the vocabulary of “commitment to inclusiveness, nurture of diversity and multiple paths for individual journeys.” The reality is mass production for profit. Scripted teaching, international standardisation of process and desired outcomes and a focus on measurable performance are the benchmarks of the manufacturing approach.

The aim of the book, consisting of chapters by academics and education writers, is to counter “weakened international and national commitments to the right to free and relevant education.”

Describing this process more directly, in announcing the formation of the Committee for Public Education, the Socialist Equality Party (Australia) stated: “For over 30 years, the ruling elites internationally have been seeking to eliminate every previous gain won by the working class. The assault on public education is a central component of this social counter-revolution. The global education ‘market’—now estimated at more than $4 trillion—is being carved up to provide new profit opportunities for giant transnational corporations. Public spending on schools and universities is regarded as an intolerable diversion of resources away from the pockets of the major financial institutions, big business and the ultra-rich.”

The State, Business and Education provides valuable detail and insights into how this assault on public education is taking place, largely behind the backs of the population.

India has one of the world’s largest youth demographics and at the same time a completely inadequate education budget. Funding cuts to the public school system have forced parents desperate for quality education for their children into so-called Low Fee Private Schools (LFPS). While an estimated 37 percent of India’s people live below the poverty line and cannot afford even the cheapest private schools, pro-privatisation entrepreneurs target those just above the poverty line, charging school fees averaging 30 percent of household expenditure.

Two actors stand out as having launched the LFPS “movement” in India, according to the authors. One is James Tooley from the University of Newcastle in the UK, who advocates moving the state out of education provision altogether. The other is Pearson, the world’s leading education service provider. Pearson operates in India through the Pearson Affordable Learning Fund (PALF), whose CEO Katelyn Donnelly has said India is its “first market before they expand to other countries.”

Hyderabad, known as the Silicon Valley of the East, is considered the perfect test laboratory. For decades it functioned as a “back office” for leading multinationals such as Google, Microsoft and Amazon. Following the 2007–8 global financial crisis, Hyderabad’s established software economy and surplus of skilled labour made it a select site for developing and upscaling the edu-business market.

The mobile education business is estimated to be worth $75 billion worldwide by 2020 with the market for devices like learning tablets set to be worth $32 billion. “E-learning companies are poised to benefit from this market, including content and assessment corporations like Pearson, mobile network firms, and companies that provide toolkits and tablets,” Spreen and Kamat write.

A major education profit-seeker in Asia and Africa is Bridge International Academies (BIA), which focuses on offering economies of scale. Financed by Pearson, billionaires Bill Gates, Mark Zuckerberg and Pierre Omidyar and aid/development organisations such as DFID-UK and the World Bank, the BIA model promises shareholders, “huge profits through rapid expansion of low resource, standardised and scalable model of schooling that leverages the technology assets of the investors themselves. In its 2015 report to shareholders it projects earnings of a billion dollars in revenue over a ten-year period.”

BIA bases its projection on an assessment of 800 million pre-primary and primary school-aged pupils in Liberia, Kenya and India, in households living on less than $2 per person per day, with 70 percent of their parents seeking “a better alternative” schooling. The report claims there is room for an “aggressive, technology-leveraged, data-driven R & D, scaled approach.”

The authors warn: “Multinational technology giants such as Microsoft, Dell, eBay and Facebook are making significant investments in this sector in order to leverage this market and provide a comprehensive set of products and services including data management, assessment systems, curricula, teacher training, online courses and virtual schools that eventually aim to make the state redundant as an educational provider.”

Spreen and Kamat argue that the technology-based reforms being introduced lack any credible evidence base. Moreover, these technology giants are “replacing or providing the same services that a national government would” and “in many ways, new education technologies have redesigned the delivery of education, reducing educational processes and student-teacher relationships to easily quantifiable and recorded forms, and distancing education professionals from the process of educational engagement.”

Far from providing “quality education” Spreen and Kamat found the LFPS operating with untrained and unqualified teachers who are paid subsistence wages in extremely crowded classrooms.

“Most buildings were not built to house several hundred (and often up to 1,000 students), so toilets were inadequate, compounding the heavy odours in hot, airless and overcrowded classrooms,” they write. “To keep enrolment at target rates every space was used for classrooms, leaving no space for laboratories, gyms or libraries. Open areas for play and sports were virtually non-existent…

“Contrary to claims of advocates of LFPS that teaching is better, more innovative and interactive, and who equate the use of technology with independent work and problem solving, what we observed in those schools was rote and didactic learning read from a script or tablet.”

Another chapter follows the transition of the world’s largest NGO, BRAC, in Bangladesh, from a model that sought to educate the poorest children in Bangladesh for free from funds donated by international donors, into a LFPS model operating entirely on fees paid by parents.

BRAC schools prided themselves on giving “a second chance at learning to disadvantaged children left out of the formal education system due to extreme poverty, violence, displacement or discrimination.” The BRAC schools functioned as a one-room, single grade, single teacher schools. Sixty-five percent of pupils were girls and 100 percent of teachers were women, hired locally, and provided with two weeks training.

Two chapters note the “particularly intense” presence of pro-privatisation actors in “low income countries and those who are vulnerable for humanitarian reasons.” The World Bank has promoted LFPS in low-income countries. “In its 2020 Education Sector Strategy the World Bank identified LFPS as a potential private partner in the provision of education in southern countries and in particular as a desirable school option for socio-economically vulnerable students.” One example is the World Bank’s grant of $10 million to BIA to stimulate its expansion in Kenya.

In 2016, according to a Guardian article, a High Court in Kampala ordered the closure of 63 BIA schools across Uganda after finding they were using unqualified teachers, provided unsanitary learning conditions and were not properly licensed.

Another chapter looks at how pro-privatisation advocates exploit emergency situations as testing grounds. In El Salvador, following its civil war, a “school based management” (SBM) program required parents to hire and fire teachers on one-year contracts, and relied heavily on unpaid parent labour.

The World Bank then secured the expansion of SBM policies by attaching conditions to loans, resulting in more than half of rural public schools in El Salvador running along SBM lines. According to the authors, Antoni Verger and Clara Fontdevila from Barcelona University and Adrian Zabcajo from Belgium: “This experiment was a crucial step in the promotion of SBM globally, despite lack of conclusive evidence on the effectiveness of SBM reforms.”

“Death by a Thousand Cuts” in the US

The penultimate chapter looks at the United States in a chapter entitled “Death by a Thousand Cuts.” Joanne Barkan says President Barack Obama became Charter-Advocate-in-Chief with his Race to the Top program, a competitive grant program that gave the charter school enterprises a substantial boost.

Barkan states that the number of charter schools, while small compared to the overall school system, “are highly concentrated geographically and wield substantial political clout.” She cites statistics where 92 percent of K-12 students in New Orleans attend charter schools, 53 percent in Detroit, 45 percent in the District of Columbia.

The author records the “mediocre” academic results of charter schools, and writes: “Both charter school management and voucher programs are rife with fraud. It comes with the territory when states hand over millions of dollars without adequate vetting or ongoing oversight.” Barkan notes another effect of vouchers and charter schools: they increase socio-economic inequality and racial segregation.

In the introductory chapter, editors Gita Steiner-Khamsi and Alexandra Draxler pose the question: “Irregularities have plagued public private partnerships from the start and for several decades they were locked out of schools. Given that, why has the education industry come back with full force?”

The State, Business and Education fails to answer that question, however. Its recommendations for “better, stronger regulation” are consequently impotent. The work itself documents that regulations abound but are ignored with impunity by profit-seekers.

As the damning exposures of the book suggest, the democratic and egalitarian principles that are meant to be embodied in public education are incompatible with the deepening crisis of capitalist profit system, which has accelerated since the 2008 crash. The insatiable demand for corporate profit is the driving force of the assault on public education system. The only solution lies in the global fight by educators, students, parents and the working class as a whole for a socialist perspective and program.