This 2009 video from India says about itself:

Sister Jesme in Kerala has written a book to reveal the sexual abuse in the cloisters, of how she was abused by priests and even fellow sisters during her years in convent.

Pope Francis is determined to end the sexual abuse of nuns by priests and bishops. He said this on a question from a journalist during a flight from Abu Dhabi to Rome.

The reason for the question was an article in a monthly magazine of the Vatican about abuse of nuns within the Catholic Church. “It is true”, said the Pope. “There are priests and even bishops who have done this. I think it is still going on because something does not stop just because you have become aware of it.”

He pointed out that priests were suspended because of the abuse of nuns and that his predecessor Pope Benedict in 2005 disbanded a female monastic order because of sexual abuse and corruption. A spokesman for the Vatican told Reuters news agency that this was a French monastic order.

The French monastic order with abuse and corruption problems was the Contemplative Sisters of Saint John (the United States branch of that order, founded after its French origin, still exists). Nuns have accused clerics of sexual abuse in India, Africa, Latin America and in Italy: here. 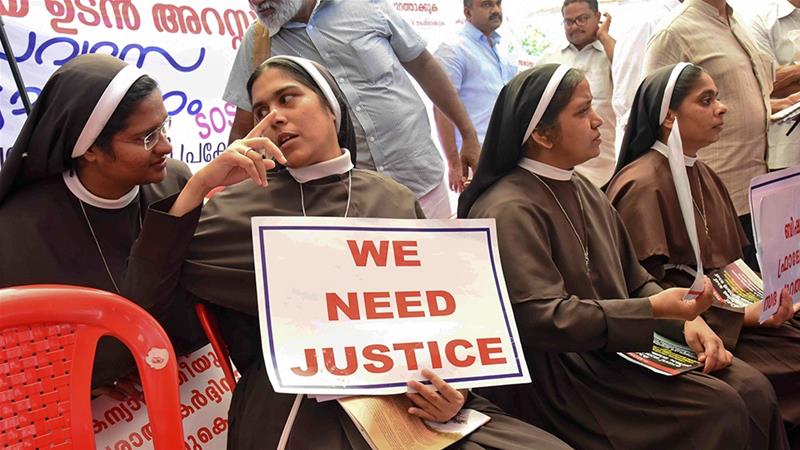 This photo shows Roman Catholic nuns protesting alleged rape by a bishop in the southern state of Kerala in India.

HuffPost reporters Jessica Blank and Carol Kuruvilla dove into abuse allegations of nuns and Catholic sisters. Although it’s rarer than abuse by priests or monks, one subject of their story, a nun named Trish Cahill, a survivor of nun abuse, believes it goes under reported. Gender stereotypes about female perpetrators of abuse make it much harder to see the broader picture: here.