70,000 strike on US-Mexico border – break the media blackout by sharing this video

70,000 maquiladors (sweatshop) workers are on strike in Matamoros, Mexico. The US and international press are blacking it out.

By Eric London and Andrea Lobo in Mexico:

The strike of tens of thousands of Matamoros maquiladora workers is set to grow on Friday as the legal “cooling off” deadline for a citywide strike expires, meaning many more plants will likely walk out.

As workers are eager to expand the strike wave, all of the forces supporting the capitalist class are scrambling to shut the strike down. …

All calls for bringing the situation under “control” and finding “conciliation” mean forfeiting the 20 percent wage increase and payment of the promised bonus. It means forcing workers to give in to the demands of the companies. …

A striker was brutally beaten by unidentified thugs on Monday, and workers report mass firings in response to the strike. …

A worker said she follows the World Socialist Web Site coverage: “It is great! Good job. Thanks for putting out the truth.”

At a demonstration Tuesday, Prieto invited a local figure, Mario Ramos, to launch a 15-minute diatribe against socialism and its influence in the strike.

“Nothing they say on social media is true”, he said. “This movement is not communist nor socialist. It doesn’t appear to me that you can have a peaceful movement if you are socialists or communists.” He asked, “Do you want to be like Venezuela?”

Ramos said, “I’m a capitalist, I like money” … Ramos continued, saying, “I’m going to tell you how to organize” and suggested workers take down their red and black strike flags in exchange for the religious image of the Virgin of Guadalupe. … 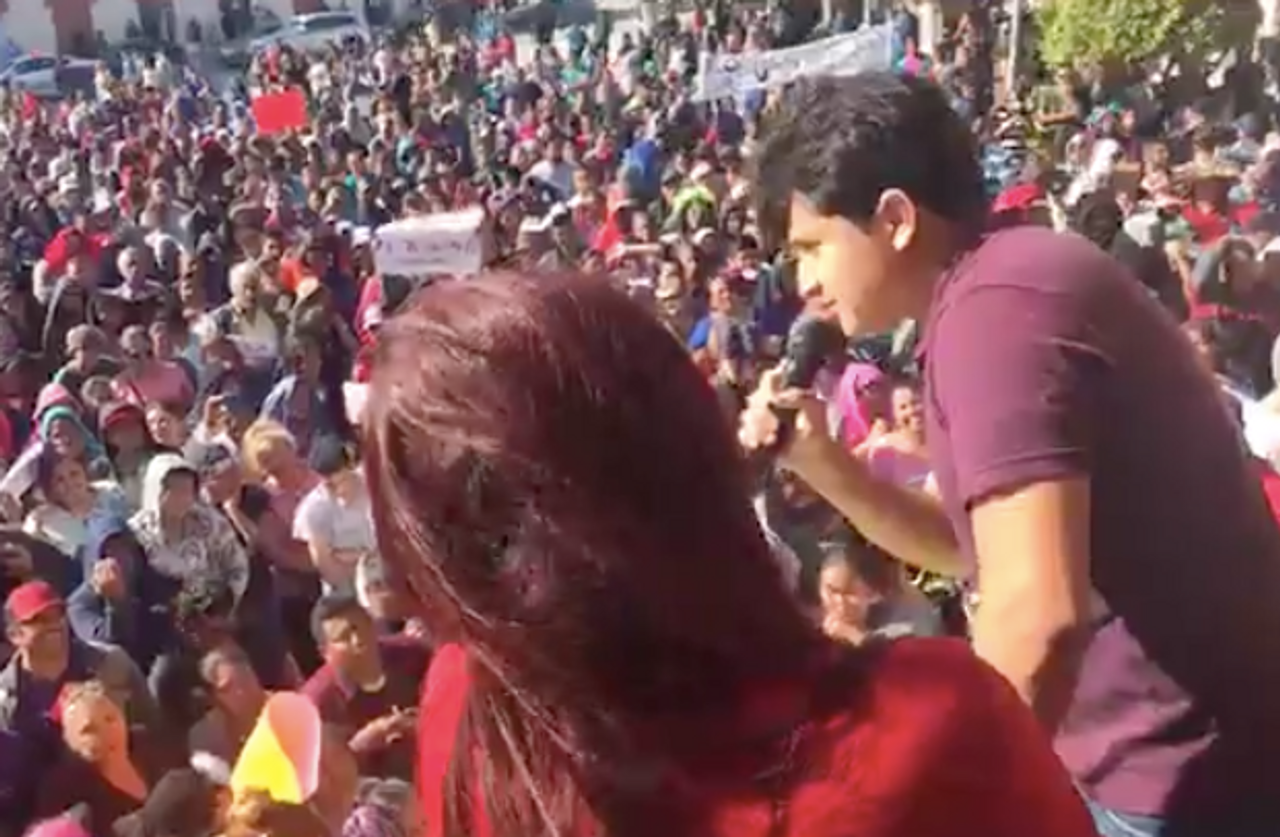 The striking workers grew hostile and began to laugh and shout Ramos down. He continued to lecture workers on the benefits of capitalism and the evils of socialism, at which point workers’ angry shouts drowned him out. When he asked the crowd if he could speak later, the workers yelled “No!” and burst into applause when he finally stopped talking.

This emerging revolutionary fighting spirit among the workers is the source of strength that workers must tap into to win their strike.

Workers have broken from the pro-company trade unions and are electing their own leaders from each factory to form a citywide strike committee. They are also reportedly establishing self-defense committees to protect strikers from violence. …

The most powerful North American auto companies are hurt by the strike. A Ford worker told the World Socialist Web Site: “I work at Flat Rock Assembly and can confirm we are laid off this week due to a parts shortage, from the looks of it, it may extend longer.”

Tens of thousands of workers in the US and Canada are eagerly reading the coverage of the strike on the World Socialist Web Site and are sending more messages of support to their Matamorense allies:

Robert, a Fiat Chrysler worker at the Jeep plant in Toledo, Ohio, said, “I fully support our brothers from down south who are striking to gain fair wages and bonuses. It’s a human right worth fighting for to have a living wage and to be able to raise a family without working yourself to death. To enjoy life and your family is worth workers of all countries taking a stand and fighting for living wages that make sure every worker who is putting in a week of work doesn’t have to live in poverty.”

Robert also called on all workers to support a demonstration to be held on February 9 by autoworkers in Detroit against plans by GM to shut plants. The demonstration will call for all workers to support the Mexican strike and build links across national boundaries for a common struggle: “I call on every member of the auto industry to stand and let GM know that their greed will not stand in this world one minute longer.”

Tommie, a skilled trades worker at Ford’s Woodhaven Stamping Plant, just outside of Detroit, said, “It’s great to know that workers south of the border are fighting the same class struggle as North American workers. The only way we can defend the working class is for all workers around the world not to bend to union complicity and corporate profits. We must stand with the Mexican walkouts.”

Tommie added, “All workers should attend the February 9 demonstration to fight the GM plant closings.”

Angela, a Fiat Chrysler worker from Kokomo, Indiana and a member of the Steering Committee of the Coalition of Rank-and-File Committees, said, “All workers around the world need one another. What we have in common is everything. I stand with you in solidarity because we need each other and because together we are unstoppable.”