This Washington Post video from the USA says about itself:

Friday will be the first payless payday for hundreds of thousands of federal workers forced to work without pay during the US government shutdown. Hundreds of thousands more are on furlough without pay, impacting everything from federal food inspections to environmental health and safety, services on Indian reservations and the operation of national parks.

The continuation of the government funding cutoff has put other programs in jeopardy, such as school meals and the Supplemental Nutrition Assistance Program, or food stamps. Federal funds for cash welfare benefits have also been cut off, forcing states to scramble to maintain the benefits. 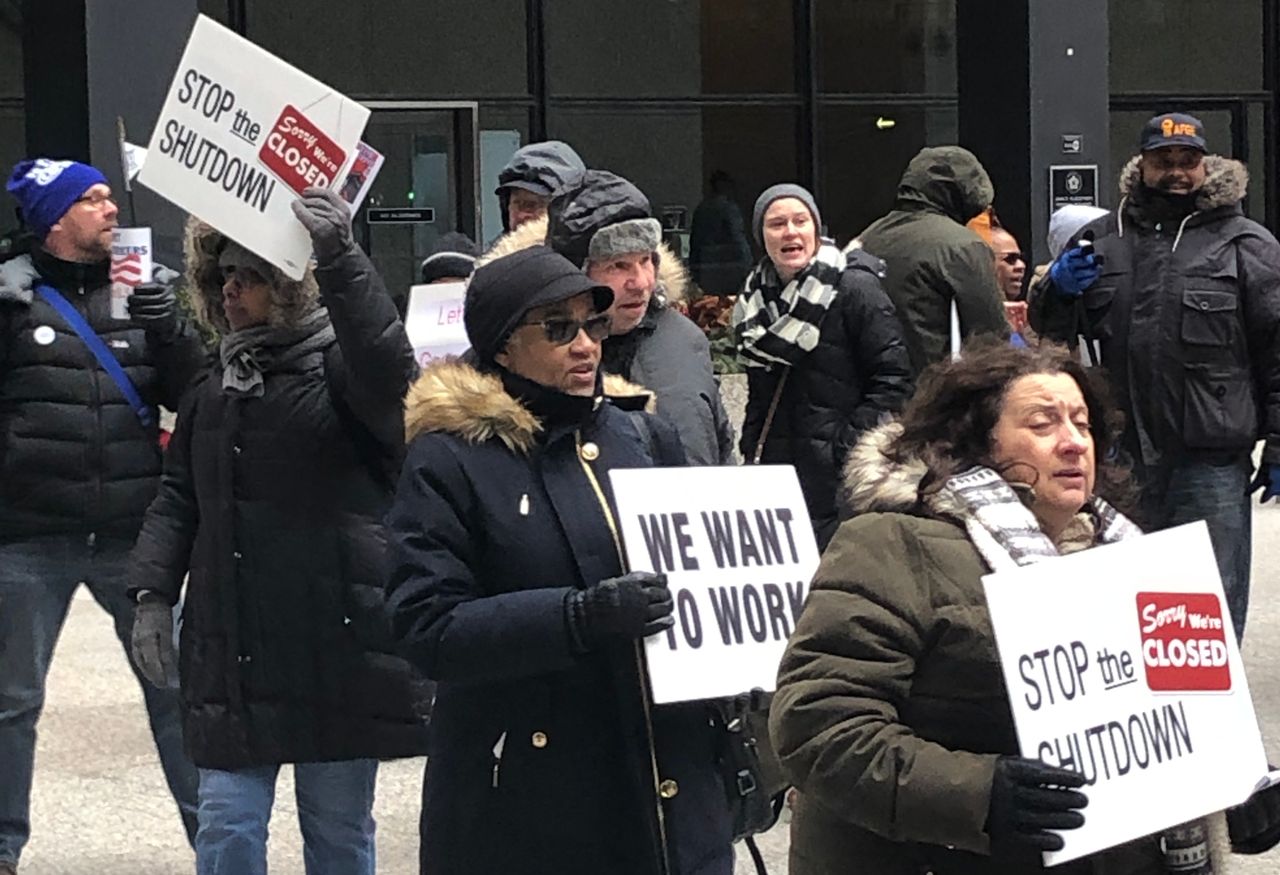 With a payless Friday looming, federal employee unions staged a series of noontime rallies at government offices across the United States on Thursday. …

An Environmental Protection Agency (EPA) worker taking part in a small rally in New York City told the World Socialist Web Site, “Friday will be our first day missing pay. We’ll get half a paycheck since we worked a week into the shutdown. The longer this goes on, the more people it hurts. A lot of federal employees’ salaries anchor their families. Personally, I won’t be able to pay rent come the first of the month. Unemployment doesn’t kick in until next week because of the waiting period, and even then it’s not enough to cover rent, let alone food, utilities and everything else.

“And our work is not getting done. Inspectors are not on the job, permits aren’t written, cleanups of toxic sites are delayed, pollution monitoring stations are breaking down without service. All these things are falling by the wayside, and it can mean real and lasting damage to public health and the environment.

“EPA has been on the chopping block for years. When Trump says the shutdown can last months or years, of course there’s a lot of bluster to it, but I think there is also a section of industry that he speaks for that would be more than happy to see it last that long.

“The union told us to keep it personal today, not political. I think it’s outrageous that in what is a politically motivated lockout, they want us to shut up about politics. I’m against the wall, against troops at the border, against using some phony emergency to try and divide us.

“The union called this protest at the last minute and didn’t make any real attempt to get other federal workers here, or for that matter immigrants whose lives have been upended. If you ask me, immigrant workers are our real allies.”

About 50 federal workers and supporters picketed in front of the McNamara Building in downtown Detroit Thursday. Among those participating were workers from the Transportation Security Administration (TSA), Food and Drug Administration (FDA), Environmental Protection Agency and the US Treasury.

Jasmine, a TSA employee, said, “We are doing our job to the best of our ability, and we are being treated like pawns in something we have no control over. It is not fair for me and for my coworkers.

“I just hope they don’t repossess my car. I have a little money saved up, and I am going to use that to pay my bills.

“My fellow coworkers are worried about how they are going to feed their children and pay their mortgages at the end of the month. Gas to get to work will be a struggle. We are like a big family. We will do what we can for each other.” 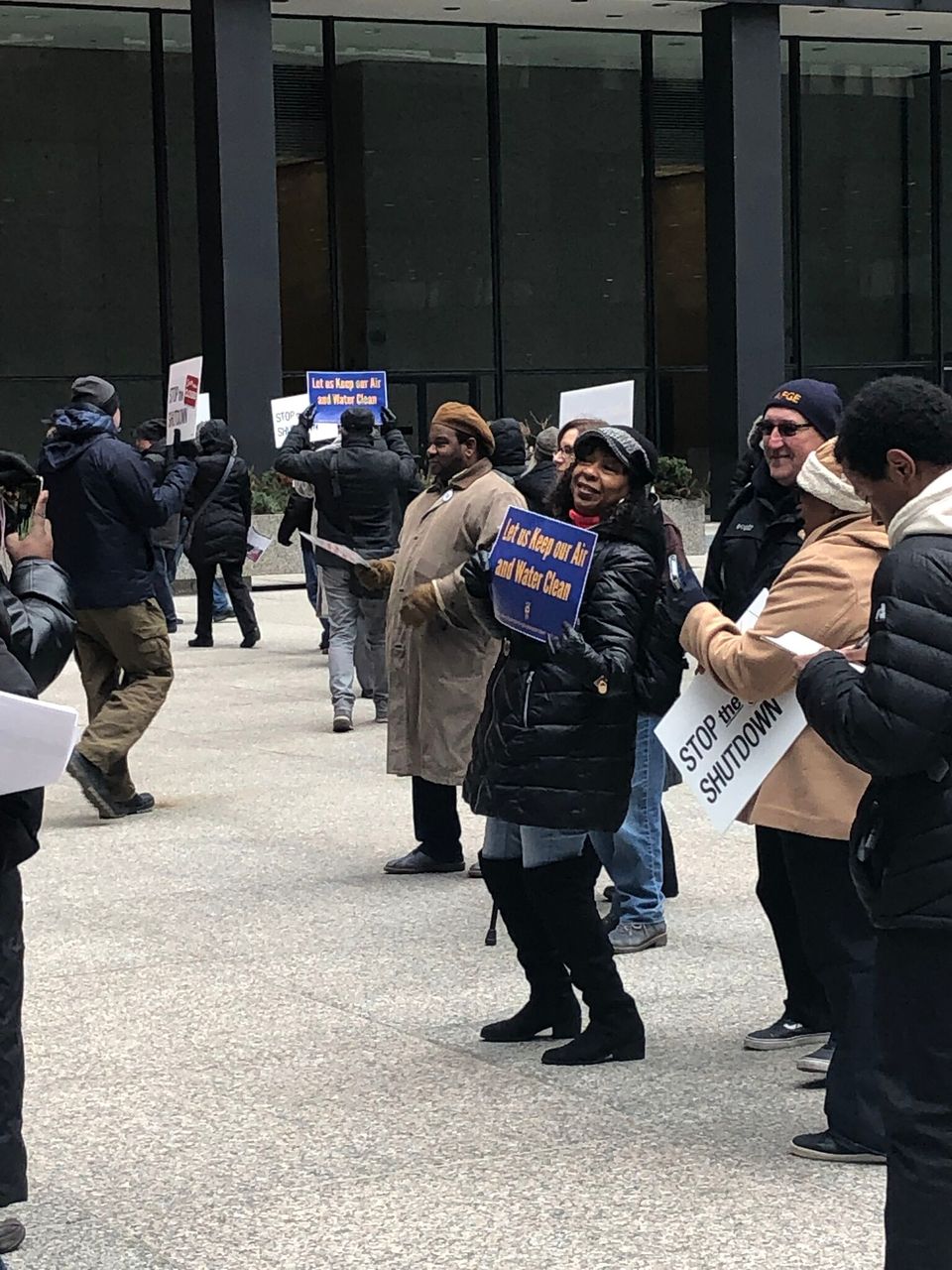 A worker on furlough, Marshia, from the Food and Drug Administration, said, “We have what they call essential people who are still working, but [the furloughs] significantly impact the number of food inspections that are done, the number of drug inspections that are done, the medical devices that are followed up on. Our essential people can’t do nearly the job they would do if all of us were working.

Marshia rejected the claim by the Trump administration that a wall was needed to protect the border from terrorists. “There are no documented cases of terrorists crossing the border.”

She added, “I agree, this is slavery, indentured servitude.”

Glenda McGadney is a retired worker with the Internal Revenue Service. She said, “[Trump] is trying to blame all of this on the immigrants, but this is also false. From what I can see and know, very, very few immigrants come to the US and carry out crimes. There needs to be a fact check on this, but from what I understand all this talk about crimes is not true.”

Asked about the possibility of Trump declaring a state of emergency to build a border wall, Glenda replied, “The government is not supposed to govern on the basis of fear. None of what they are saying is true.

“Most of the people in this country are from immigrants. We are all immigrants.”

A worker for the Social Security Administration said, “I am presently working, but it is not clear how long the funds will last for our department.

“I think this situation is horrible. Who can afford to work and not get paid? It’s not fair to workers in the federal agencies or to the public. This shutdown has lowered the morale of the workforce enormously.

“Something has to be done. You can’t survive without getting paid. One of the things it affects is quality work. You can’t do it under these conditions.”

Another federal worker said, “I think there should be a general strike. They are taking advantage of us. I feel like we are an ATM, as they have been continually taking away from us. Don’t get me wrong, I love my job, but I am trying to do my best with a bad situation.”

TSA WORKERS MISS FIRST PAYCHECK Transportation Security Administration employees miss their first paycheck of the year today due to the shutdown. Workers are bracing for the next phase as they try and pay for gas, rent and food with no income in sight. [HuffPost]

Here’s how the record-breaking government shutdown is disrupting science. The shutdown is forcing scientists to cancel presentations and halt research. By Laurel Hamers, 8:00am, January 12, 2019.