Maria Austria: A life in pictures

In post-war Europe, photographer Maria Austria covered the revival of culture surrounding her. Theatre, actors, dancers, musicians. A Europe moving forward from the trauma of the previous decade. But a recently-found archive shows another side that Maria Austria had kept silent: The Jewish side. And that she was a Holocaust survivor herself. This is her story.

By Verena Nees in Germany:

Her photos shed light on history: The outstanding work of photographer Maria Austria (1915-75)

Given the current political situation, it is significant that an exhibition at the Verborgene [Hidden] Museum in Berlin rescues this important artist from oblivion. Not only was she a witness to and victim of war and fascism, she also captured the social contradictions after World War II with a critical and at the same time profoundly humane outlook. 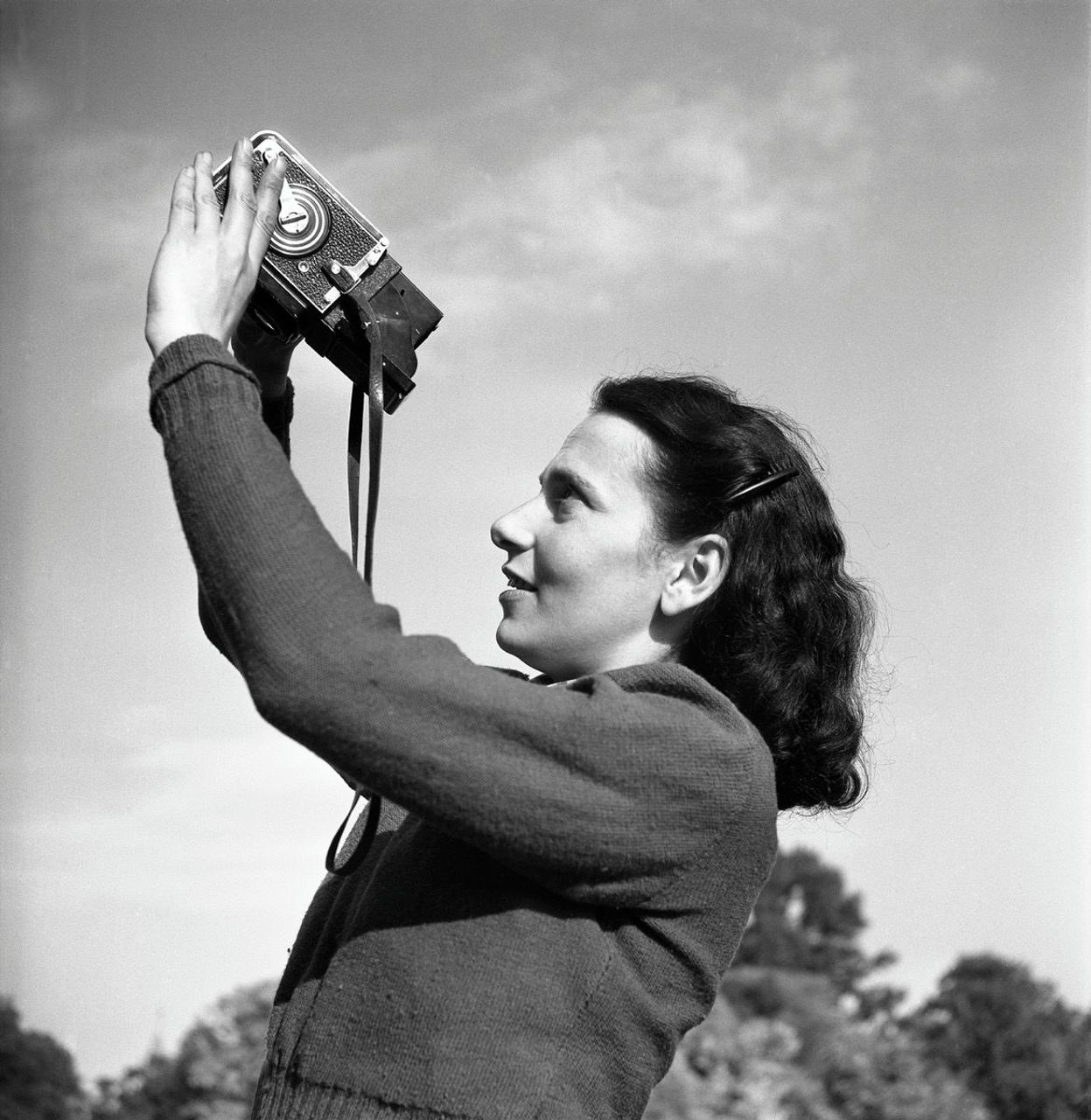 Her work deserves to be presented in one of Germany’s and Austria’s major museums, not least because she is the source of the only photographic record of the hiding place of Holocaust victim Anne Frank and her family in the famous “Achterhuis” (Dutch for “back house”) or Secret Annex, located at Prinsengracht 263 in Amsterdam. Anne took refuge in this house with her family and another Jewish family until she was denounced in 1944 and deported to Auschwitz …. 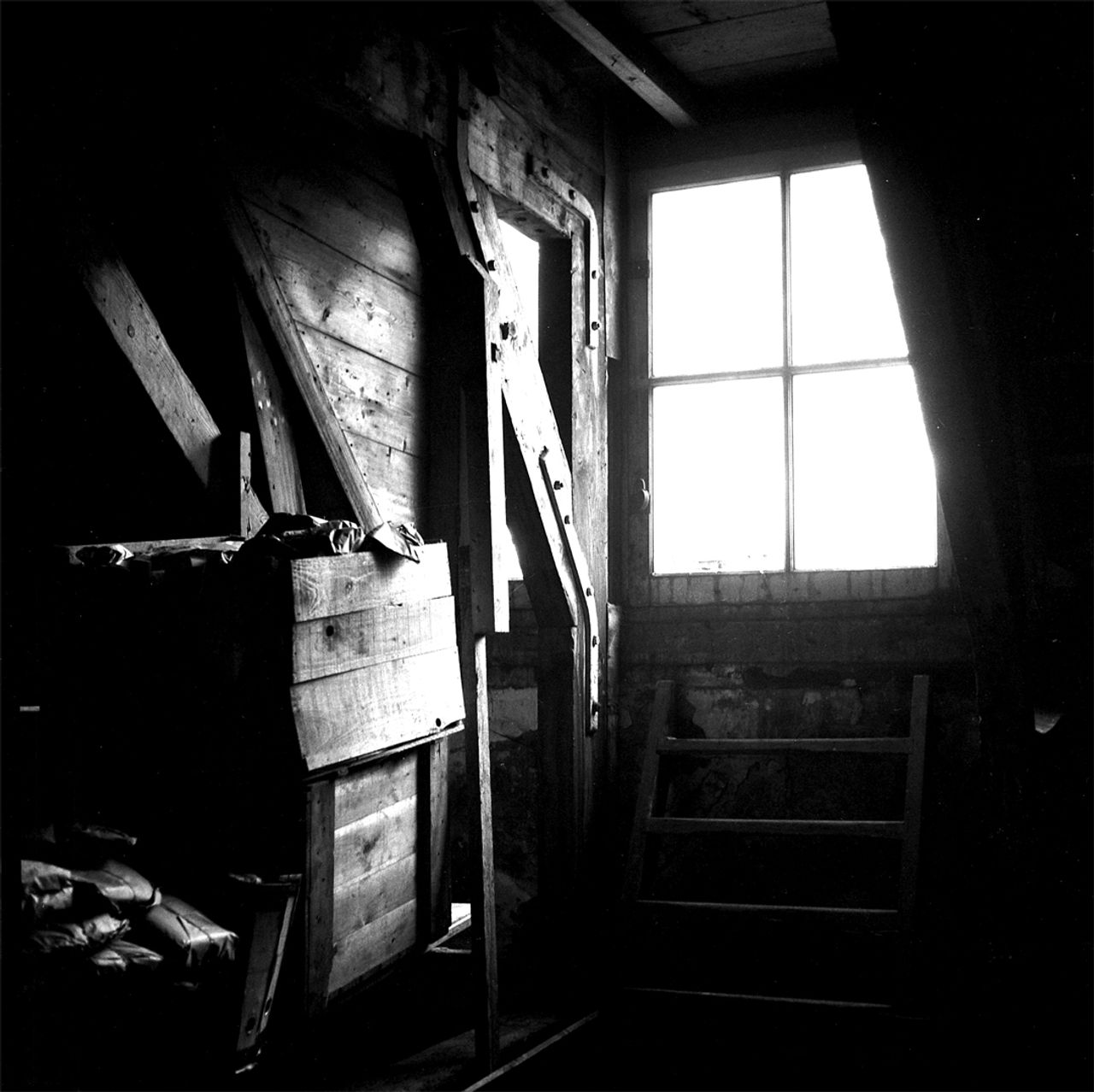 Today, the house is the site of the Anne Frank Museum. Maria Austria’s photos were invaluable during the restoration of the dilapidated rooms, which only took place after a lengthy campaign by Anne’s father, Otto Frank, the sole survivor of the family. The Dutch authorities had wanted to demolish the house.

For the first time, a selection of the approximately 200 Frank-Achterhuis photos can now be seen in Germany. Maria Austria took the photos in 1954, together with her husband Henk Jonker, in preparation for the first play and film about Anne Frank (The Diary of Anne Frank, by Frances Goodrich and Albert Hackett, 1955, and the 1959 film of the same title directed by George Stevens).

She meticulously captured every detail, revealing in intimate fashion the traces of life in the cramped, gloomy Frank family dwelling: the concealed door behind the file cabinet, the steep wooden spiral staircase behind that and, above all, the wall which the adolescent Anne covered with postcards and newspaper clippings. Another photo shows the ever-present danger, taken from the attic of Maria Austria’s own hideout just a few houses away: German soldiers marching along the street in front of the houses. 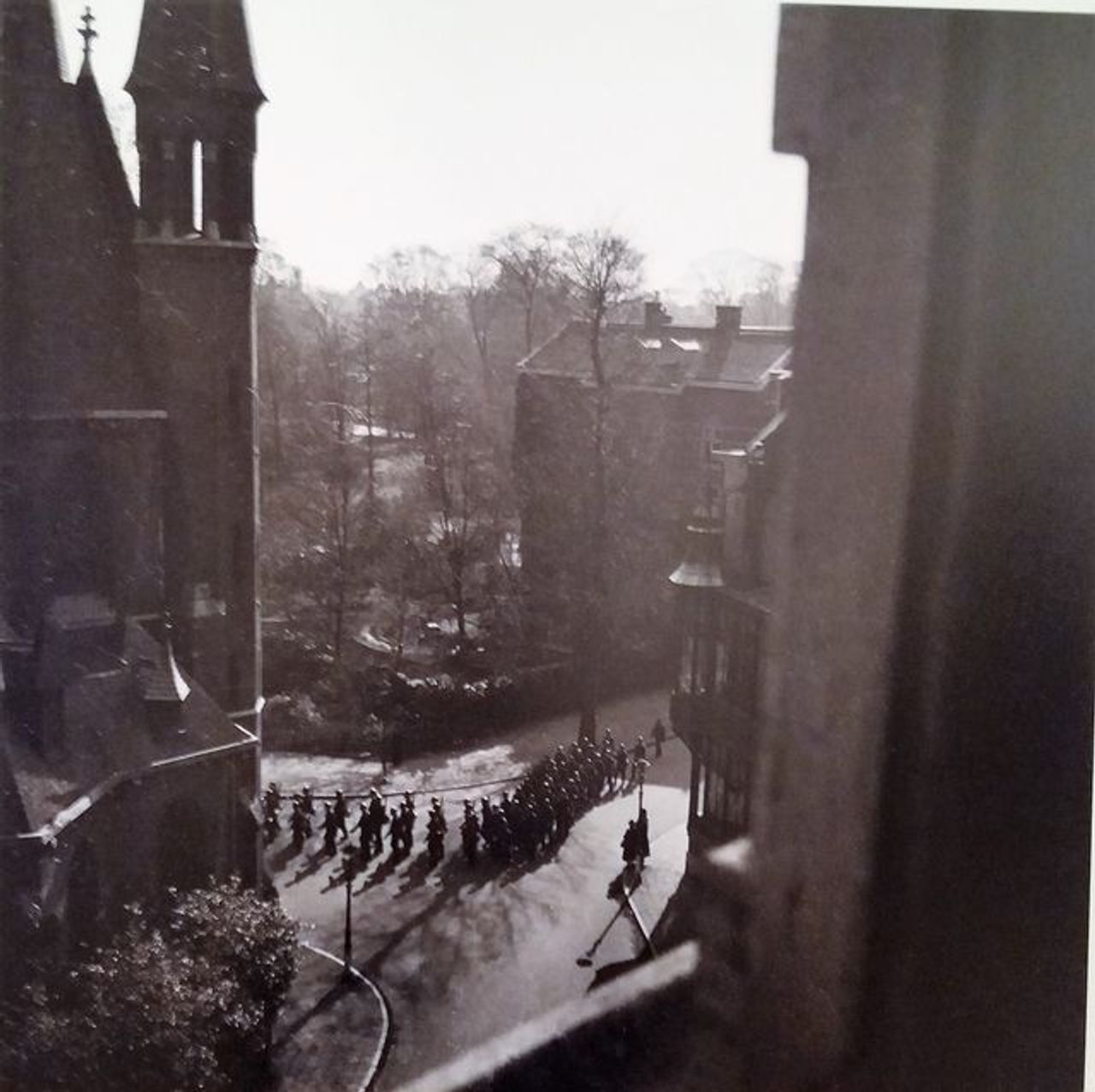 “These photographs are unequivocal and document forever the circumstances of Jewish families forced to go underground and hide from the persecution of the Nazis,” writes Marion Beckers, the curator of the Verborgene Museum, in its newsletter.

In addition to the Frank-Achterhuis photos, the exhibition surprises with previously unknown photo documentation of key social episodes, including the “Hunger winter” [the Dutch famine of 1944-45, caused by a German blockade, in which tens of thousands died], the return of Jewish detainees from the Westerbork internment camp and a children’s village for Jewish Romanian orphans. 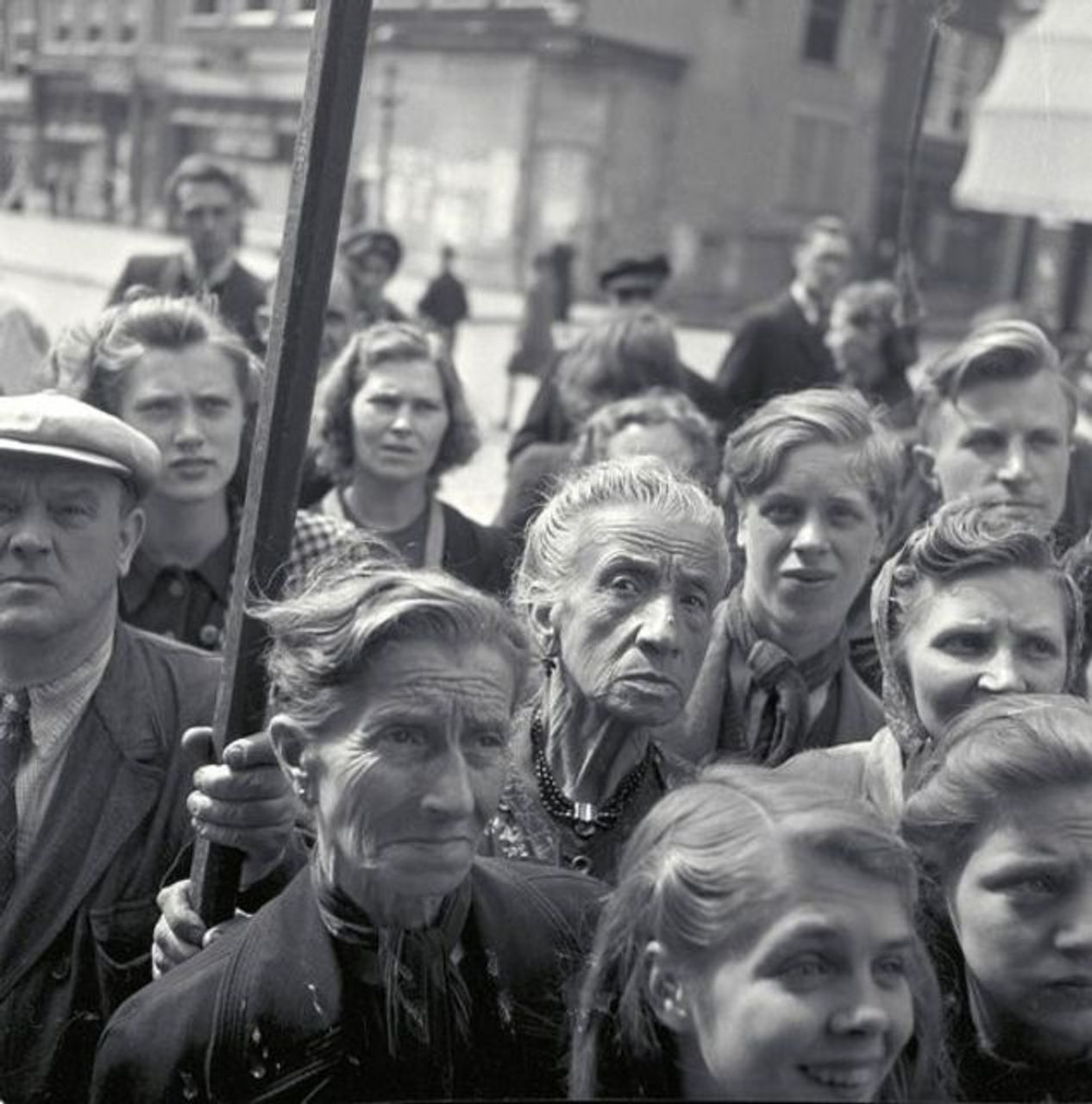 Other works feature equally unknown portraits of leading artists such as Bertolt Brecht, Thomas Mann, Benjamin Britten, Igor Stravinsky, Mstislav Rostropovich, James Baldwin and Josephine Baker. The exhibition also includes studies of postwar reconstruction, a report on the great flood disaster in 1953 and a series of vibrant theatre, dance and circus photographs, which were among Maria Austria’s special passions, altogether yielding the image of an all-sided photographer and artist. 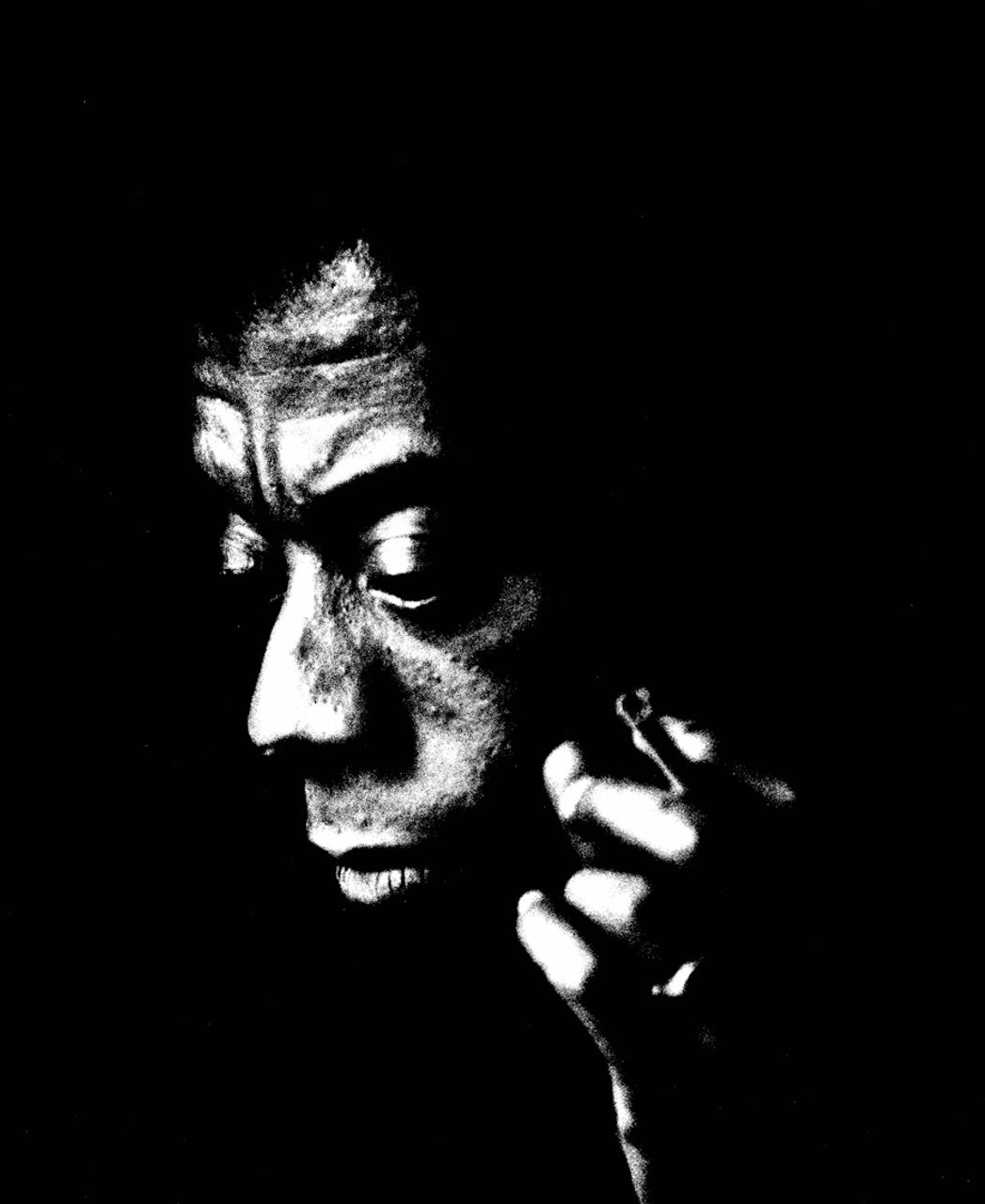 A German-language brochure by Martien Frijns has been published to accompany the Berlin exhibition. It is based on his Dutch-language biography of Austria, which remains to be translated. Five years ago, Frijns examined the estate left behind by the photographer in the Maria Austria Institut (MAI) in Amsterdam, and discovered numerous hitherto unknown photos, including the documentation of the “Achterhuis.”

In the Netherlands, where Maria Austria is well known and popular, and where some of her work has been shown at five small exhibitions, these pictures were on display for the first time this year. A major retrospective at Amsterdam’s Jewish Historical Museum from January to September 2018 attracted a record number of visitors.

Marie Karoline Oestreicher was born the youngest daughter of a Jewish doctor’s family in Bohemia’s Carlsbad (now Karlovy Vary), which was still part of the Austro-Hungarian empire. She graduated as a photographer from the renowned Graphische Lehr und Versuchsanstalt [Graphics Teaching and Research Institute] in Vienna with honors, gained her first practical experience at the well-known Willinger photo studio and moved in the circles of left-wing artists and theatre people around Vienna’s Naschmarkt district.

As official anti-Semitism spread in Austria, the photographer fled in 1937 to Amsterdam, where her older sister Lisbeth—who had trained at the Bauhaus art school in Dessau—was already living and working as a textile designer. The rest of the family, her brother Felix Oestreicher, his wife Gerda Laqueur, their three daughters and Gerda’s mother, fled the Nazis in 1938 and also moved to the Netherlands. In 1943 they were deported to the Westerbork concentration camp in the northeastern part of the Netherlands and from there to Auschwitz and Bergen-Belsen. Only her brother’s daughters survived, together with Lisbeth, who remained incarcerated in Westerbork throughout the war. After the war, the two sisters cared for their three nieces.

Following the Nazi occupation of the Netherlands in 1940, Maria Austria refused to register as a Jew, went underground and joined the resistance. Together with her future husband Henk Jonker and other Jewish photographers such as Eva Besnyö from Hungary, she helped to make false passports and carried out secret courier work. Along with Jonker, she founded the agency Particam (Partizanen Camera), which went on to include other well-known photographers of the resistance such as Aart Klein.

Why were the Frank-Achterhuis photos and the postwar reportage not shown in the Netherlands before this year, although the Austria estate was open to the public at the MAI? Previous exhibitions featured only “optimistic” photos of reconstruction and cultural life after the war. What does this say about the postwar recounting of history? The WSWS asked Martien Frijns to respond.

“That’s a good question,” Frijns replied. Immediately after her death in 1975 nobody was well acquainted with Austria’s estate, but later, in 2001, with the beginning of the digitisation of the photos, “one only researched what you call optimistically composed photos, and these were the ones shown. You can interpret that as typical for the times, or as a concession to the popular mood.”

The MAI, which was set up as an archive for Maria Austria’s photos and now also contains the estates of other Amsterdam photographers, receives little financial support, Frijns said. As her biographer, he has devoted many hours of his free time to research, uncovering the unknown photo stories that have now been shown.

“Then I realized that the photographer’s complete works were very extensive and historically very important,” Frijns stresses. “I knew that the Austria photos shed light not only on Dutch, but also European postwar history.”

Maria Austria did not publicly acknowledge her Jewish roots and did not even tell her three nieces about them. Like her circle of friends, she was a non-religious, assimilated Jew who worked in the resistance with left-wingers and communists.

As was the case in Germany, the crimes of the Nazis were covered up in the Netherlands during the immediate postwar years. The occupying German army had met with fierce resistance from workers and students, but the Dutch business elite, broad sections of the military and the government administration readily cooperated with the Gestapo, SS and Wehrmacht [German military]. Some 75 percent of Dutch Jews were deported to the camps, a higher percentage than in any other Western European country.

“It is crystal clear that little was said about the war in the postwar years,” Frijns explained. “One did not talk about the horrors in Bergen-Belsen, where Austria’s mother and her brother died along with his wife, or about the Westerbork camp, where Austria’s sister Lisbeth survived the war.”

Her aunt was not religious and never spoke about Judaism, according to Helly Oestreicher, Maria Austria’s only surviving niece, writing on the online art magazine artsy.net. But with her “passionate interest in culture and books, and everything that happens in the world,” she remained true to her Jewish roots, said the niece. At the opening of the exhibition in Berlin, Helly Oestreicher related to WSWS her concern at the increasing influence of far-right tendencies in Germany and the Netherlands.

Maria Austria’s approach to photography is defined as neorealist. Unlike the Hungarian-Jewish photographer Eva Besnyö, who was influenced by avant-garde currents in Berlin in the 1930s, Maria Austria avoided any form of artistic alienation or distortion. Her photos are vivid snapshots of the social contradictions prevailing in the postwar era. The focus is repeatedly on faces that look directly into the eyes of the contemporary viewer as if they had much to tell.

As with other neorealist artists after the war, Maria Austria’s photos clearly reflect a left-wing orientation. Her work takes sides: with the workers and ordinary people who are starving and bombed out, but proudly populate the streets with bicycles a few years after the end of the war (Amsterdam, 1950)—the Nazis had confiscated all bicycles in 1944—and with the children in the slums, e.g. in Nijmegen, with sores on their feet and legs due to malnutrition, but who yearn for a happy life and avidly surround some circus clowns in the streets. 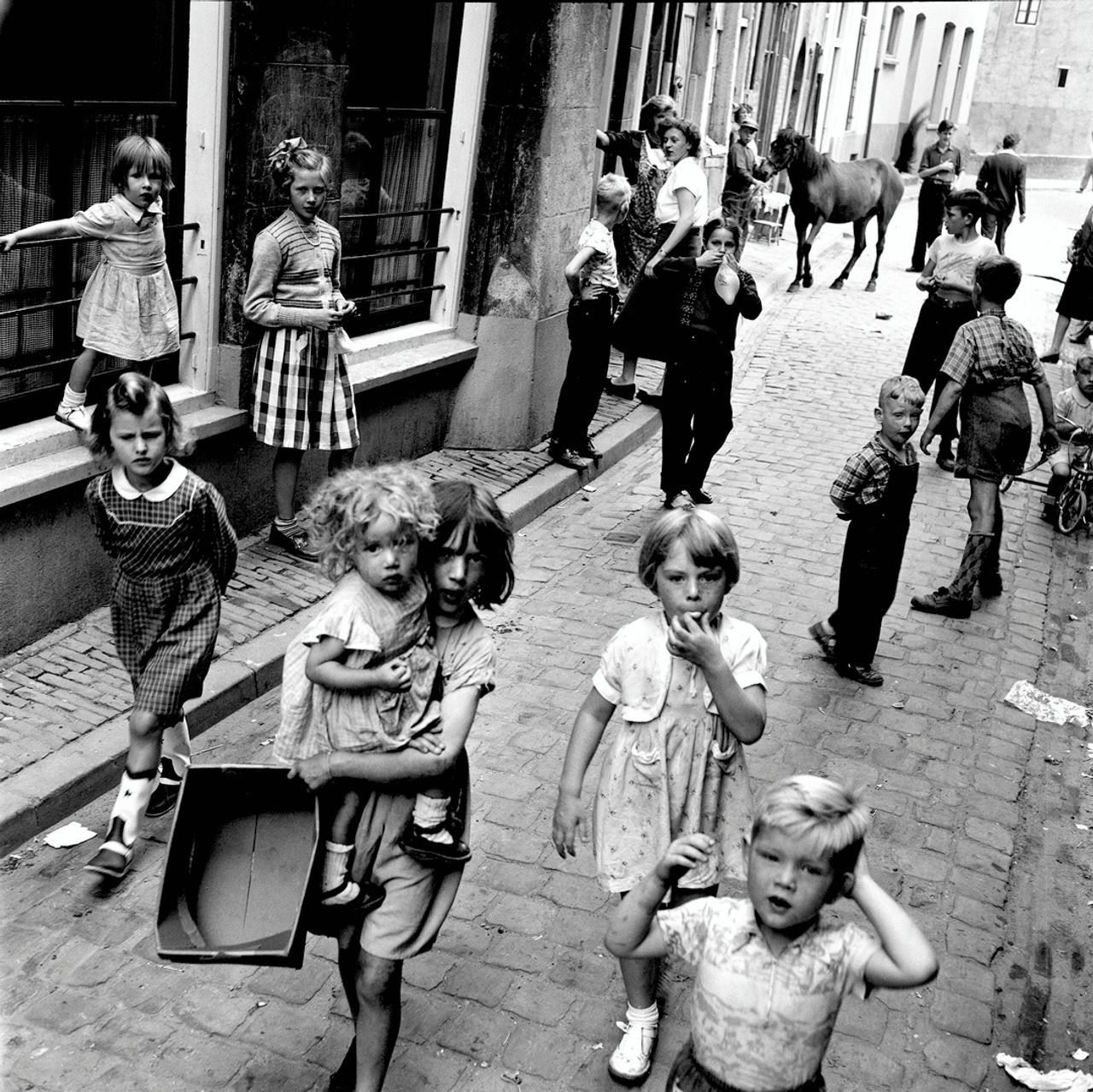 In the photo series of Jewish returnees from Westerbork (1945), Maria Austria depicts the general indifference of the people of Amsterdam for those returning from the camps with all that they possess packed in suitcases. One senses her great empathy for the Jewish orphans from Romania (1948), photographed at the Ilaniah children’s village in Apeldoorn in the centre of the Netherlands. Disabled children and adolescents were incarcerated in the camp up to 1943 before deportation to Auschwitz. The approximately 500 Romanian children who lost their parents in the Holocaust were later sent to Israel.

A photo shows a group of collaborators being led away, their expensive clothing and cold faces betraying their roots in the upper stratum of society. The next set of photos depicts the “asocial camp” Drenthe, in which the Dutch government housed socially vulnerable families until 1950. These families were forced to carry out hard labour for the purposes of “resocialisation”. Despite the objectivity of the photos, Austria’s indignation is evident.

Her other studies—portraits and theatre, music and dance photos taken by Maria Austria at the annual Holland Festival and as photographer for Amsterdam’s experimental Mickery Theater—captivate with their combination of precision and expressiveness.

One photo shows the Russian cellist Mstislav Rostropovich during a rehearsal. Austria shows him from the perspective of his instrument, which protrudes from the bottom of the photo and merges seamlessly into the upper body and face of the musician. The vibrations of the strings and dark musical tones determine his facial features. Equally impressive is the almost black photo of the American writer and symbol of the American civil rights movement James Baldwin.

“Unlike in Vienna, I no longer try to put as much as possible into a head shot, but, on the contrary, get as much out of the face as possible,” Maria Austria wrote in a letter from Amsterdam in late 1937.

In 2003, Berlin’s small Verborgenes Museum displayed a selection of Maria Austria’s work, concentrating on her postwar reconstruction photographs of the late 1950s and 60s. The museum should be praised for its latest exhibition. Many of the photos are of burning relevance under conditions where the return of war, racism and fascist violence is once again on the agenda.