This September 2018 video says about itself:

Employed but homeless in the US: The ‘working poor‘ who can’t afford to rent

In the US state of California, with rents soaring and wages not keeping up, finding a place to live is becoming increasingly difficult. In some counties, a number of employees – the “working poor” – even end up homeless and are forced to sleep in their vehicles.

A programme prepared by Patrick Lovett and Gaëlle Essoo.

By Genevieve Leigh in the USA:

Rising homelessness: The reality of life for workers in a “booming” US economy

On any given night in the United States 553,000 people experience homelessness, according to the 2018 Annual Homeless Assessment Report (AHAR) published by the Department of Housing and Urban Development (HUD) and sent to Congress on Monday.

The report shows that homelessness is on the rise for the second year in a row. It underscores the harsh reality for broad sections of workers in the world’s richest and most “advanced” capitalist country, under what is routinely described as a “booming” economy.

The report sheds light on many aspects of the worsening social crisis in America. Below are some of its most essential findings:

• Homelessness declined this year for all racial groups except people identifying themselves as white, who saw an increase of four percent. White people accounted for 54 percent of the homeless overall.

• Half of all people experiencing homelessness were in one of five states: California, New York, Florida, Texas or Washington.

• In January 2018, 3,900 people were staying in sheltered locations specifically reserved for people displaced by presidentially declared national disasters. These people were displaced from areas struck by Hurricanes Harvey, Irma, Maria and Nate, as well as regions hit by Western wildfires and other storms or natural disasters.

Among the top factors driving the increase in homelessness is the drastic rise in housing costs in major cities. This is exacerbated by the continuation of wage stagnation, despite a near-record low official unemployment rate.

According to the report, over half of all people experiencing homelessness resided in one of the nation’s 50 largest cities. The most notable increase took place in King County, Washington, which includes Seattle, the sixth most expensive city in the US. Homelessness rates there rose by 4 percent.

In New York City, where the critical loss of affordable housing is well documented, homelessness increased by 2.8 percent. The report revealed that nearly three in 10 people in families that experience homelessness in the US do so in New York, which has an estimated 52,070 people in homeless families. The results of the HUD homeless report are damning, and even more so when one considers its significant limitations. The data largely comes from locally conducted “point in time” surveys, which are nearly a year old. This method of data collection involves teams of government workers who take a headcount of everyone they can find living outside on a single night in January.

In addition, a number of communities did not participate at all in the 2018 national count, including San Francisco, which has seen an immense increase in homelessness in recent years. It is likely that the number of homeless people in the United States is significantly underreported.

Earlier this year, a report by the National Low Income Housing Coalition revealed that there does not exist a single place in the US where someone working a full-time minimum-wage job could afford to rent a modest two-bedroom apartment. A person working 40 hours a week, 52 weeks a year, would require a $26.87 hourly wage to afford such an apartment without spending more than 30 percent of his or her income. In the nation’s capital, Washington DC, where the current minimum wage is $13.25, one would have to earn $34.48 an hour to afford a modest two bedroom apartment.

These two reports taken together tear to shreds the notion that the Democratic Party’s “radical” demand for a $15 an hour minimum wage would seriously lessen the crisis facing workers. The cost of housing coupled with the attack on wages and full-time work has pushed hundreds of thousands of workers into precarious living situations, if not outright homelessness.

Such conditions are widespread across industries. Nearly 95 percent of the jobs created during the Obama administration were part-time, contract, on-call or temporary. This piecemeal work, referred to as the “gig” economy and cynically sold to the younger generation as “flexible” work, excludes health care and other benefits and is often unreliable.

It has become commonplace for workers to hold down two or three part-time jobs in order to make ends meet and provide for their families. Just 39 percent of Americans say they have enough savings to cover a $1,000 emergency room visit or car repair. 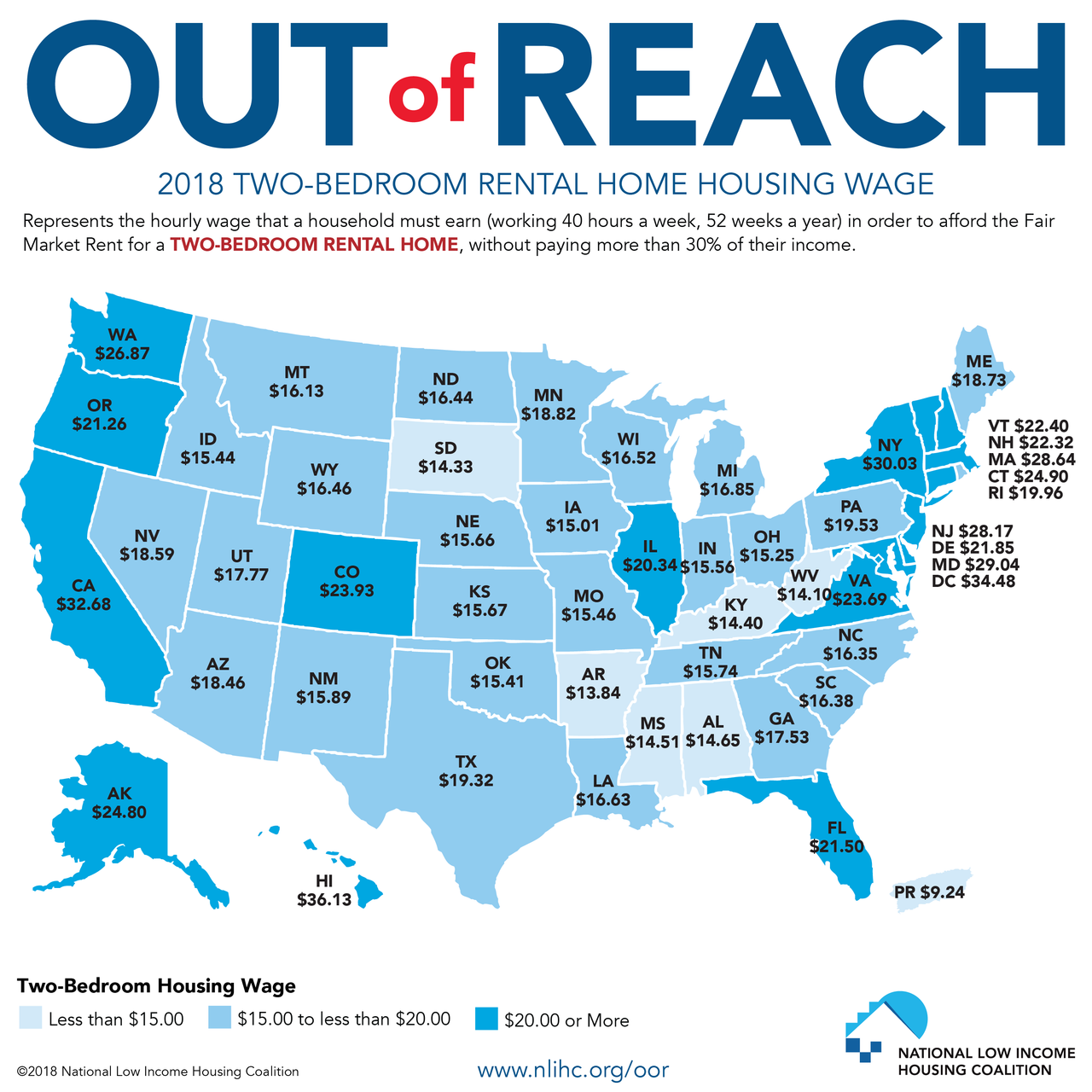 As the World Socialist Web Site has documented in the case of Texas Amazon worker Shannon Allen, who has been living out of her car for months after being injured on the job, tens of thousands of workers live one paycheck away from homelessness, though they are employed by some of the largest and richest companies in the world.

Reports have emerged this year documenting the growing number of adjunct college professors, many of whom have a Masters degree or PhD, who are forced to live in their cars. Dubbed the “fast food workers of the academic world”, a quarter of these workers are said to be enrolled in public assistance programs. During the wave of teachers’ strikes that erupted early in the year across the US, thousands of teachers spoke out about being forced because of low wages to take second and even third jobs to make ends meet.

In the auto industry, companies have entered into special “competitive cost structure” agreements with the United Auto Workers under which more experienced “legacy” workers are pushed out of the plants and replaced by low-paid, second- and third-tier workers, making as little as the $9 Michigan minimum wage.

These younger workers are often brought on as temporary part-time (TPT) employees, with no rights and no job security. They can be fired at will. They face the most brutal working conditions, as exemplified by the case of Jacoby Hennings, the 21-year-old TPT worker who held jobs simultaneously at two auto plants in Michigan and allegedly killed himself in the fall of 2017 in the UAW local union hall, under still unexplained circumstances. His story is representative of an entire generation of workers.

The statistics on rising homelessness are all the more significant when one considers that they have not only persisted, but worsened in the midst of the supposedly “booming” US economy.

In the “financial recovery” overseen by Democratic President Barack Obama and continued by Donald Trump, the ruling class has grown richer than ever. The Dow Jones Industrial Average has tripled since 2009, propped up by a new financial bubble created by the Federal Reserve’s $4 trillion in quantitative easing. As the Financial Times wrote at the end of this year’s third quarter: “For the big, diversified US banks—Bank of America, Citigroup, JPMorgan Chase and Wells Fargo—the story of the third quarter was simple: reap the benefits of a good economy, contain expenses, pay less taxes, buy back shares, and make lots of money.”

These vast fortunes were made on the backs of the working class, whose experience since the 2008 crisis has been a nightmare of immense proportions. Democratic and Republican politicians alike, at the behest of the banks and corporations, used the 2008 crash to create the best possible conditions for the financial oligarchs. This meant gutting social services, casualizing labor, loosening safety regulations and attacking healthcare and other benefits.

The indifference and contempt of the ruling class for the plight of workers is indicated by the official response to the HUD report on homelessness. It went virtually unmentioned by both big business parties and barely reported by the corporate-controlled media.

In the eyes of the banks and corporations, the chronically underemployed and unemployed are seen not as economic refugees, but as what Marx called the “industrial reserve army”, available to provide labor for sudden expansions in production while keeping wages low due to their precarious situations.

U.S. HOMELESSNESS UP The number of homeless people in the United States increased slightly for the second year in a row — a setback after seven years of progress and decline. [HuffPost]

LA HOMELESS NUMBERS SWELL Los Angeles County saw a 12% increase in homeless residents in 2019 from the year before, according to new figures from the LA Homeless Services Authority. There were nearly 59,000 homeless people in the county on a given night in January 2019 ― up from less than 53,000 in 2018. [HuffPost]

GIANT BOULDERS MIRROR HOMELESSNESS DESPERATION A narrow, unassuming two-block stretch in San Francisco where residents placed 24 giant rocks along the sidewalk has found itself a symbol of the desperation, frustration and emotions of California’s homelessness crisis. [HuffPost]

8 thoughts on “Rising homelessness in the USA”