From deep within Private Eye HQ guest curator Ian Hislop takes you on a journey through the history of protest and dissent using objects from the British Museum collection. Marvel as a humble (solid gold) salt cellar becomes an act of religious defiance. Prepare to be shocked and awed as a forged banknote takes on the law of the land.\

Uncover a world of dissent, satire and subversion in the Museum’s collection. You just need to know where to look…

I object—Ian Hislop’s search for dissent: An exhibition that eradicates socialist ideas and revolutionary action

At the British Museum, London

The British Museum is currently staging an exhibition of 100 objects or so covering the “history of dissent”, co-curated by Ian Hislop, BBC broadcaster, editor of satirical magazine Private Eye and officially certified “national treasure.” 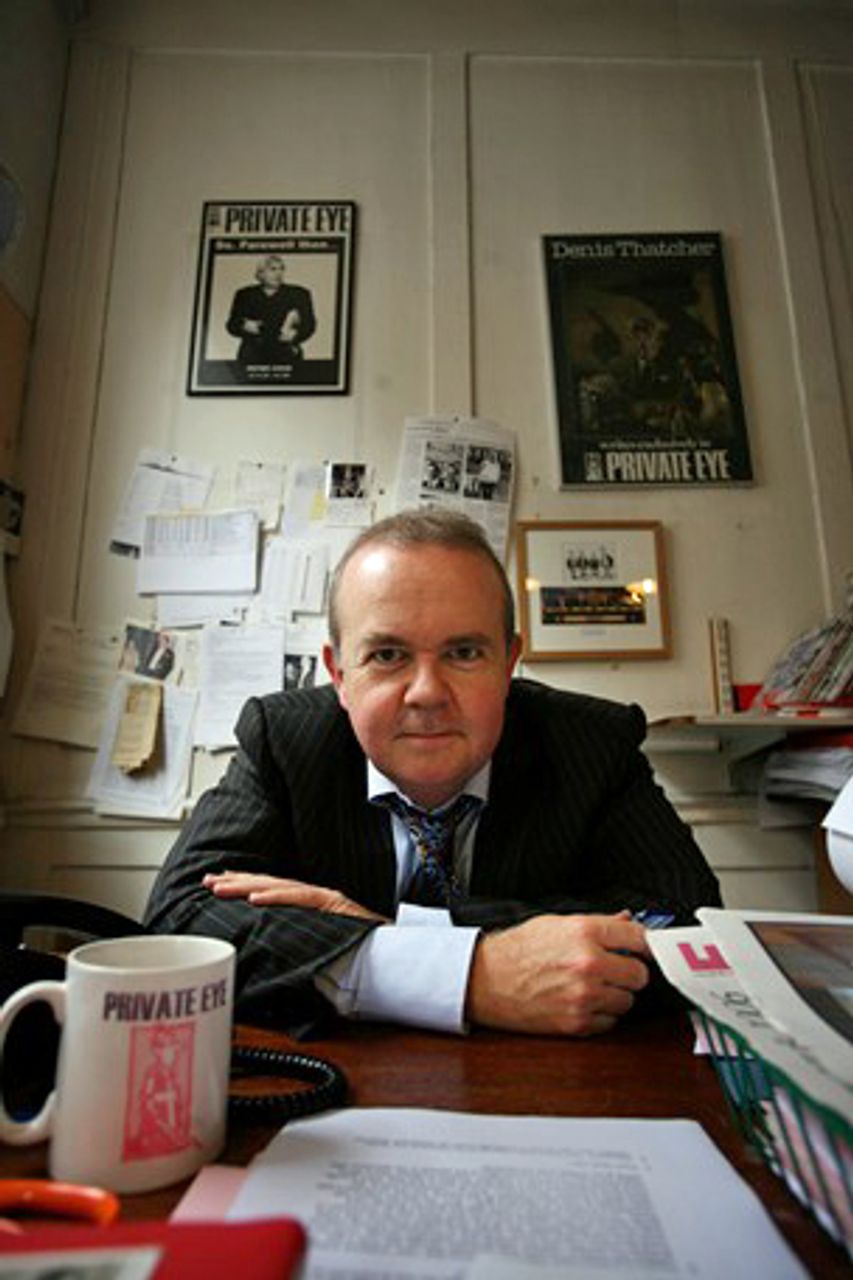 Hislop is gifted with a good education (Ardingly College and Oxford University) and had unprecedented access to one of the world’s most magnificent collections, but ends up producing an exercise in political, social and artistic emptiness.

Hislop proclaims, “The British museum contains an extraordinary collection of objects from different times and places, but at first sight it all seems to be reinforcement, if not actually a celebration of authority … Or is it? I wanted to find out whether there were objects that challenged the official version of events, defied the established narrative and presented a different view. Was there actually subversive material lurking among the mummies and the monuments?”

Hislop answers his own question: yes, “dissent is everywhere.” But he makes it clear that he is only interested in objects that fit in with his own worldview, that of a well-heeled public-school educated British patriot who abhors socialist ideas and revolutionary change. “Our aim from the outset was not necessarily to find world-changing acts of resistance, although we came across those as well, but rather, small acts of disobedience by ordinary people … independent of any organised networks of resistance”, Hislop informs us. Poking fun at the rich and powerful and satirising their excesses is about “the best anyone can hope for”, he concludes.

This is truly lazy and ignorant stuff.

Hislop’s interpretation of dissent is suspect from the start, attempting to inject sexual titillation into the exhibition’s objects from antiquity. He suggests that several small figurines with giant phalluses found in the Egyptian town of Naukratis dating from around 2,500 years ago represent dissent from puritanical official iconography around the figure of Horus the child-god.

This period of antiquity is far more complex than Hislop’s childish and smutty construct. Archaeologists explain that their Victorian predecessors (like Hislop himself) exaggerated the “eroticism” of the Naukratic figures and downplayed their religious function. They were “used in rituals concerning fertility, specifically that bestowed on Egypt during the annual Nile inundation associated with the worship of Isis-Hathor, Osiris, and Horus-the-child (Harpokrates).” (Lucia Marchini, World Archaeology, Issue 77, 2016)

Several of the exhibits deal with dissent in the British Empire. We see a patched tunic symbolic of the “Mahdist” rebellion against the British occupation of Sudan in the 1880s and images of Mahatma Gandhi in his dohti (loincloth) in India, along with the black and white Palestinian keffiyah headscarf made famous by Palestine Liberation Organisation leader Yasser Arafat. Again, these objects are treated as individual statements of dissent. Any consideration of these national movements, which mobilised millions in mass struggles, is relegated to what people wore. 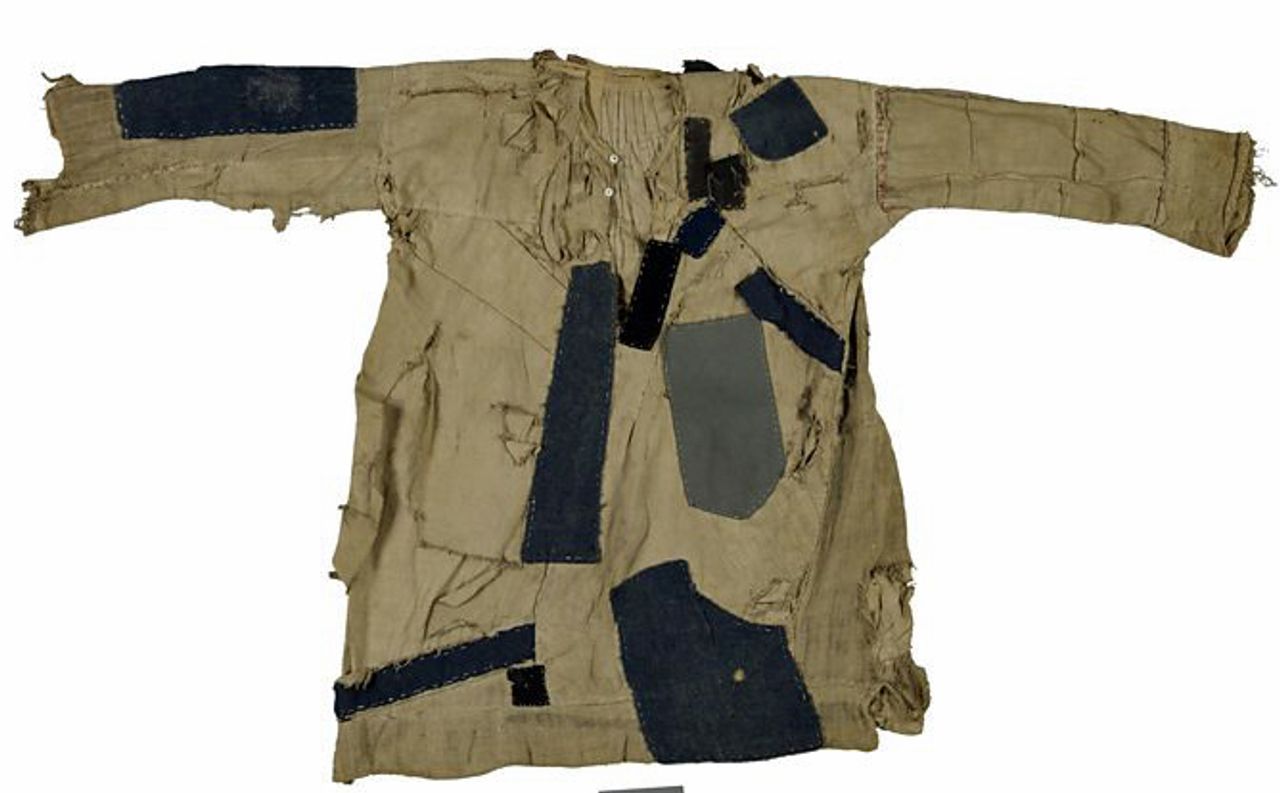 Hislop has also selected “dissenting” objects from the 1960s and 1970s, including Zippo lighters belonging to US troops and etched with slogans expressing anger over their situation. Again, little is done to enlighten visitors as to the nature of the imperialist war or their intimate connection with the 1968-75 wave of revolutionary struggles by the international working class, the greatest since the 1920s. 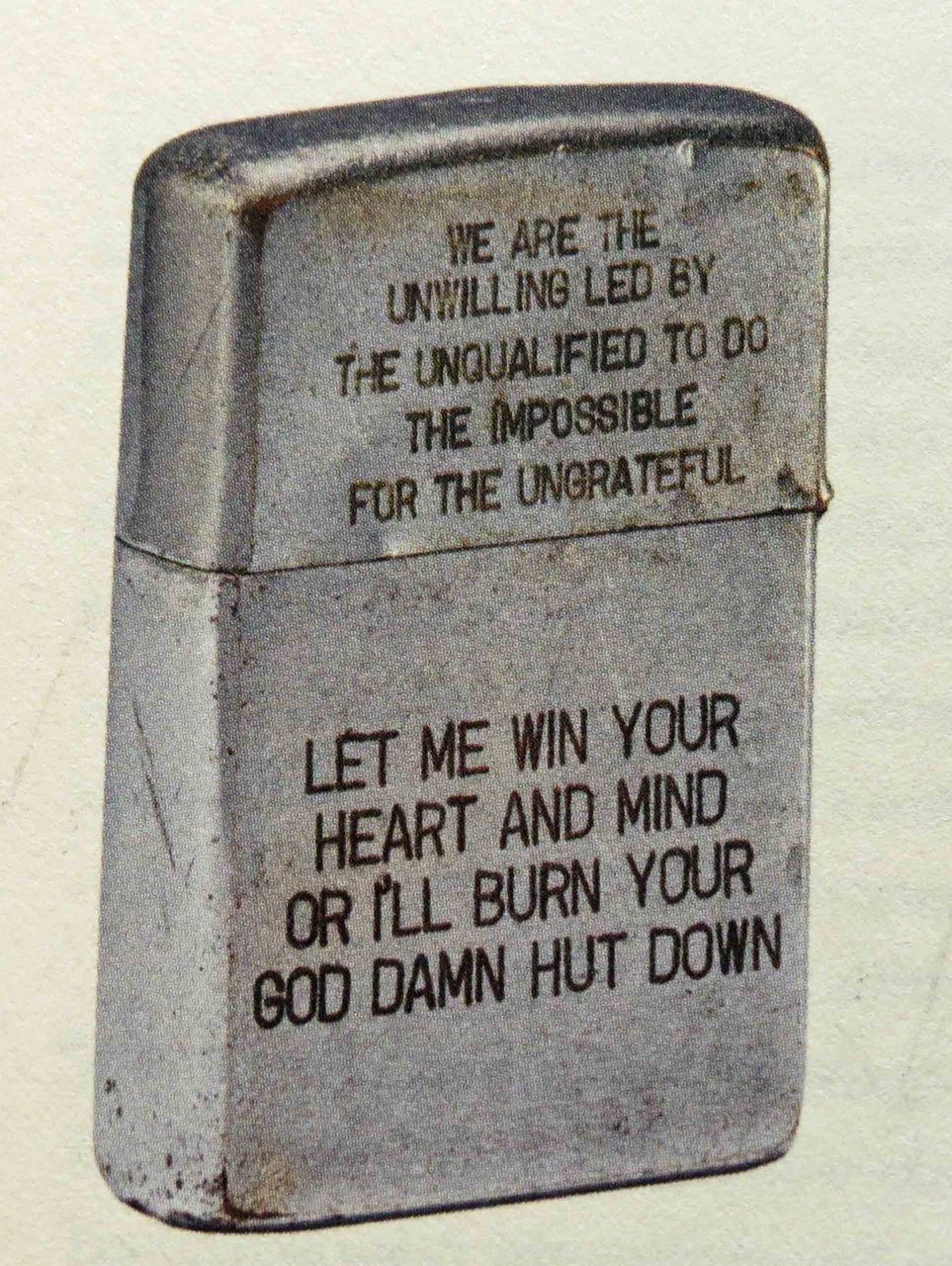 This period not only saw mass opposition to the Vietnam War along with a mounting political crisis in the United States, leading to the resignation of President Richard Nixon in 1974, but the May-June 1968 General Strike in France and mass movements of the working class throughout Europe. These upheavals led to the downfall of fascist governments in Portugal and Spain and the toppling of the military dictatorship in Greece.

Behind this political sea-change lay the crisis of the world financial order established in the aftermath of World War II, under the economic hegemony of the United States. Capitalism only survived because of the betrayals of the Stalinist and social-democratic parties and trade unions, with the assistance of various centrist groups, which systematically suppressed and diverted the struggles of the working class to preserve the existing social order.

Without such an appreciation it is also difficult to understand the significance of Akasegawa Genpei’s pastiche “Great Japan Zero-Yen Banknote” from 1967, which imitates a 1,000 yen note and declares “Rebellion is justified / It is right to rebel.” Hislop puts it down to “heightened leftist activism” without further elaboration.

Some of the most interesting objects in the exhibition are identified with the revolutionary struggles in America (1775-1783) and France (1789-1799), which received overwhelming support in Britain and brought it too close to revolution.

Hislop ignores the man who epitomises revolutionary dissent in Britain during those fateful years—Thomas Paine, author of Common Sense (1776), Rights of Man (1791) and The Age of Reason (1794, 1795 and 1807) and active participant in the revolutionary movements in America and France. Many objects associated with Paine exist in the British Museum archives.

Instead Hislop concentrates on lesser (though still remarkable) figures, including Thomas Spence (1750-1814), best known for his utopian Land Plan, which attacked the private ownership of land and called for it to be handed over to parochial corporations run for the benefit of the citizenry. Despite the utopian character of his plan, Spence was described by Frederick Engels as “that glorious old Tom Spence,” while Karl Marx called him the “the deadly enemy of Private Property in Land.” 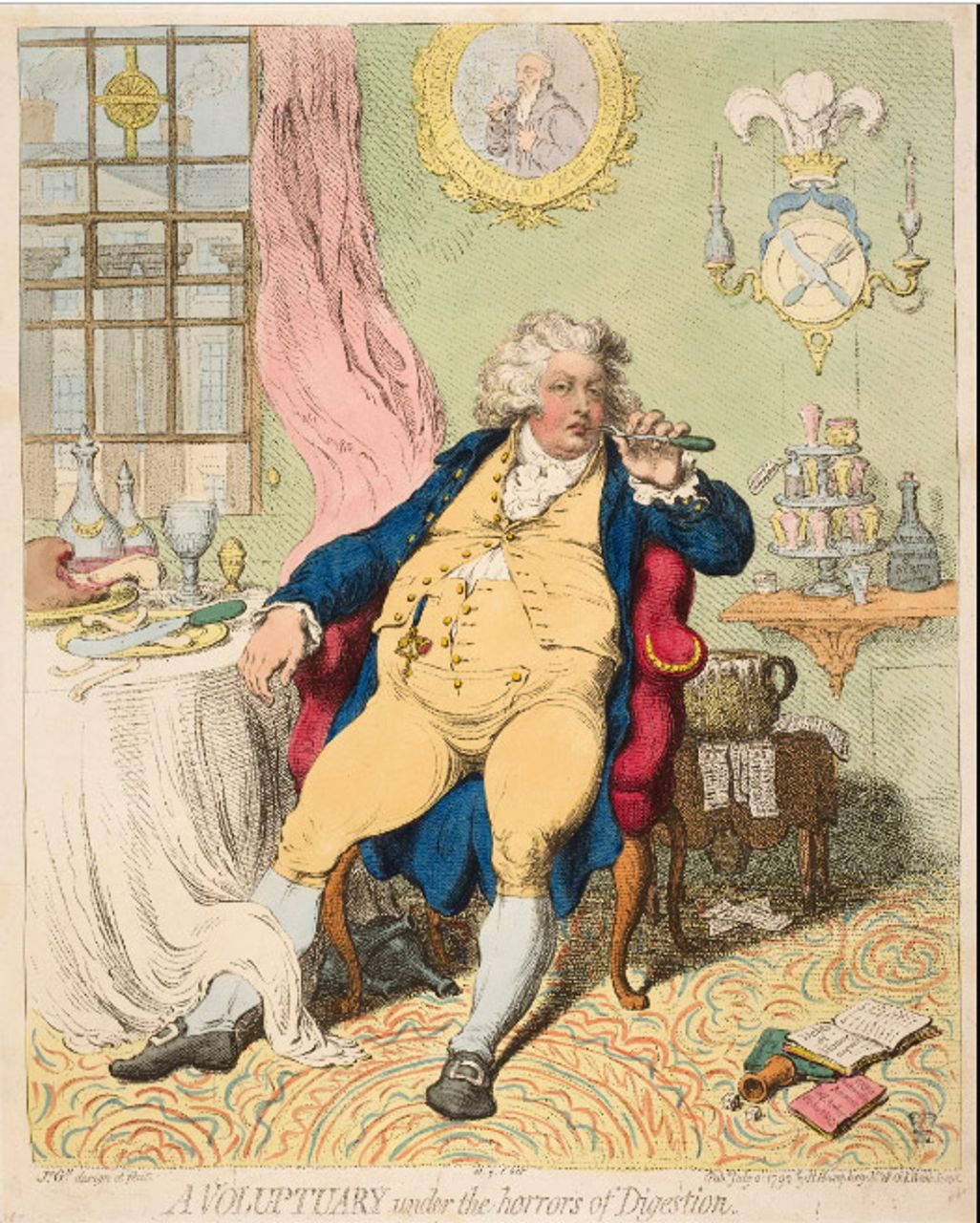 There are wonderful satirical political prints of the period, including the 1792 caricature of the Prince of Wales, “A Voluptuary under the Horrors of Digestion,” by James Gillray (1756-1815). The 30-year old future King George IV is depicted slumped and bloated, surrounded by the best food, empty alcohol bottles, dice and betting slips, unpaid bills and medicines to combat venereal diseases. One can’t imagine such biting satire appearing in Hislop’s Private Eye today.

Gillray was eventually persuaded to produce prints in favour of the monarchy and government, in return for an annual payment of £200 (£25,000 today). However, other dissenters were brutally repressed. In addition, newspapers were banned, meetings outlawed, organisations proscribed and radical activists arrested, deported and executed—all this culminating in the 1819 Peterloo Massacre in Manchester. The massacre is also represented in the British Museum collection, but ignored by Hislop, as is the whole gamut of trade union, socialist and revolutionary dissent that followed over the next century and a half. Every great artist and satirist gravitated toward the socialist movement, but they are airbrushed out of this history of dissent. 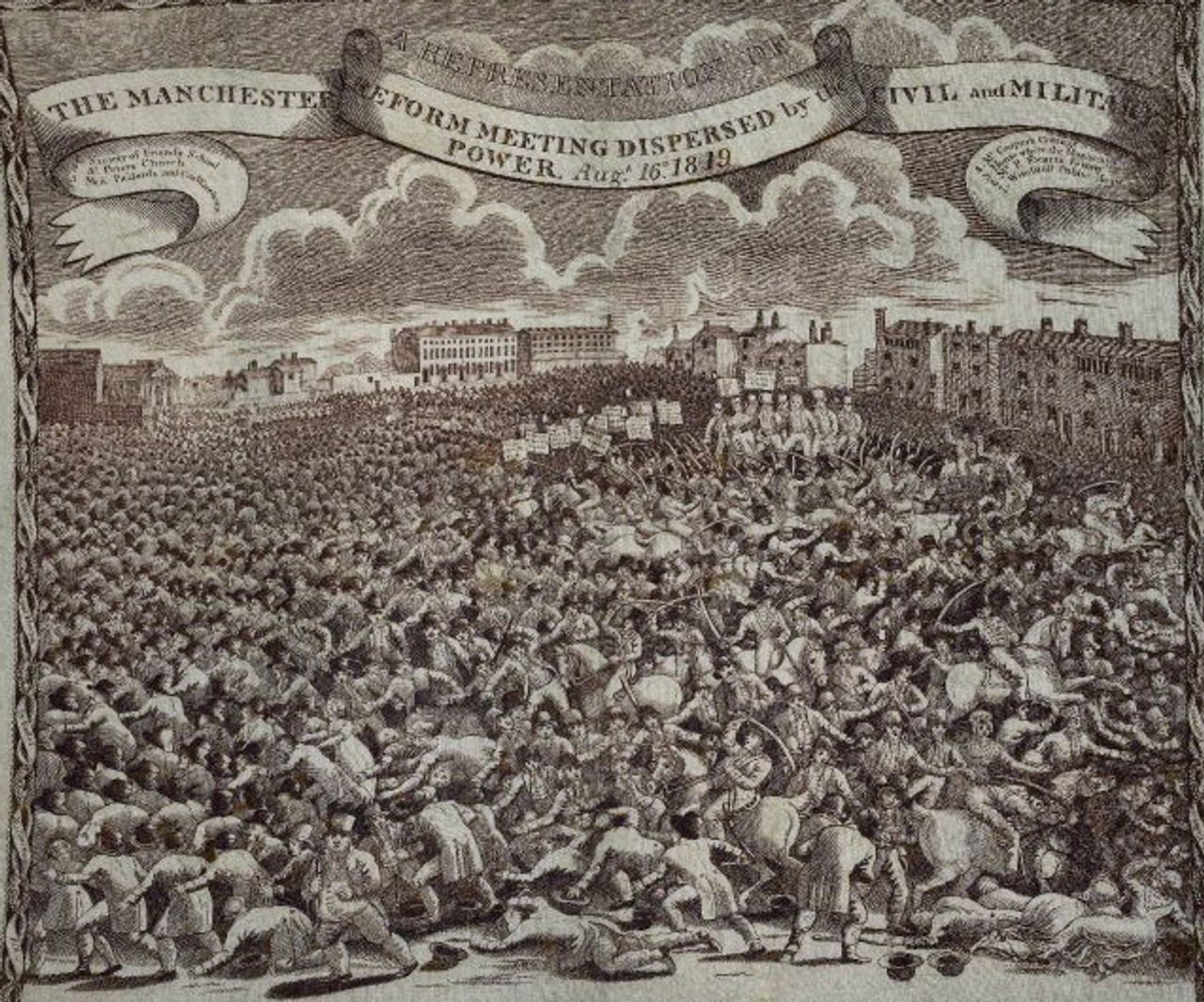 No one would guess that Karl Marx worked for decades in the Reading Room of the British Museum, just yards away from the exhibition entrance, or donated all his manuscripts to it. The same goes for Bolshevik leader Vladimir Lenin, who studied there five times between 1902 and 1911. The Russian Revolution led by Lenin was the greatest act of “rebellion” in human history and an inspiration for artistic creativity in Russia and internationally. Hislop’s only comment on these tumultuous events is a hostile one—a cartoon on a plate produced shortly before the dissolution of the Soviet Union in 1989, depicting Lenin showing the finger and shouting, “Fucking Revolution.” 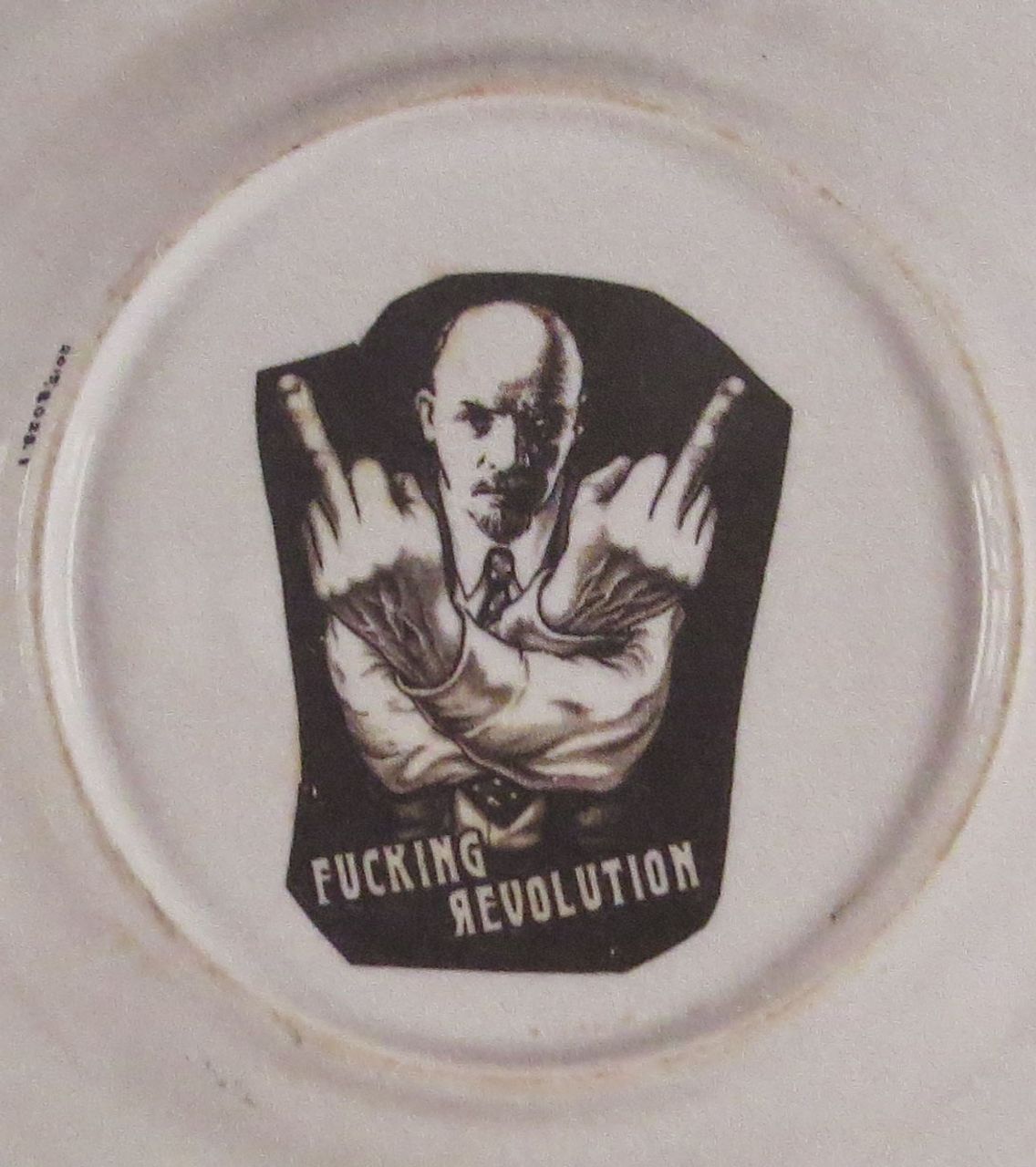 In mounting the exhibition, Hislop is pleading with the ruling elite to recognise the role that people like himself play. He declares, tellingly, “Permitting dissent, or at least the illusion of political criticism, can be a useful means of channelling and controlling the public mood, serving as a metaphorical safety valve on societal pressures. Allowing the politically disenfranchised to upset established hierarchies for limited periods or within strict boundaries can help to deflect attention from social realities.” (Emphasis added) It is the relative lack of such safety valves that worries him.

Everywhere today the ruling class is turning to right-wing and fascist forces in anticipation of fierce class struggles. Imperialist governments slaughter civilians in large numbers in the name of defending “human rights”. Global technology corporations censor the internet while claiming to be protecting “democracy” and excluding “fake news.” Governments use gagging laws to repress artistic expression. Rarely has there been a period in history more sorely in need of genuine satire. But the would-be satirists of our day have remarkably little to say, handsomely paid as they are for their efforts to keep social discontent within safe official channels.

Hislop professes sympathy for the “small guy” but has nothing to say about the sponsors of his exhibition—Citi, the third largest banking group in the US, whose actions helped lead to the 2008 financial crisis, and the recipient of billions of dollars in bailouts. Tens of thousands of workers lost their jobs as a result of Citi’s activities.

Any satirist worth his salt would make mincemeat of such drivel as the bank’s claim, “We believe that by celebrating the past, we all have the opportunity to define the future” and “personal expression has the power to make change and drive progress,” and run a mile from its embrace.