This 17 November 2018 video from England says about itself:

Thousands in London March Against Racism and the Far Right

Thousands took to the streets of London to protest xenophobia, and linked the rise of the far-right with austerity.

London demonstrators speak out against racism and fascism

Socialist Equality Party members and supporters distributed thousands of copies of the World Socialist Web Site perspective “French President Macron hails fascist dictator Philippe Pétain” article at the demonstration in London on Saturday. A WSWS reporting team spoke to some of those who attended the protest.

Elliott, aged 35, attended the march from Kentish Town, London. He was originally from Nottingham where he was homeless for many years and currently works at a YHA youth hostel. 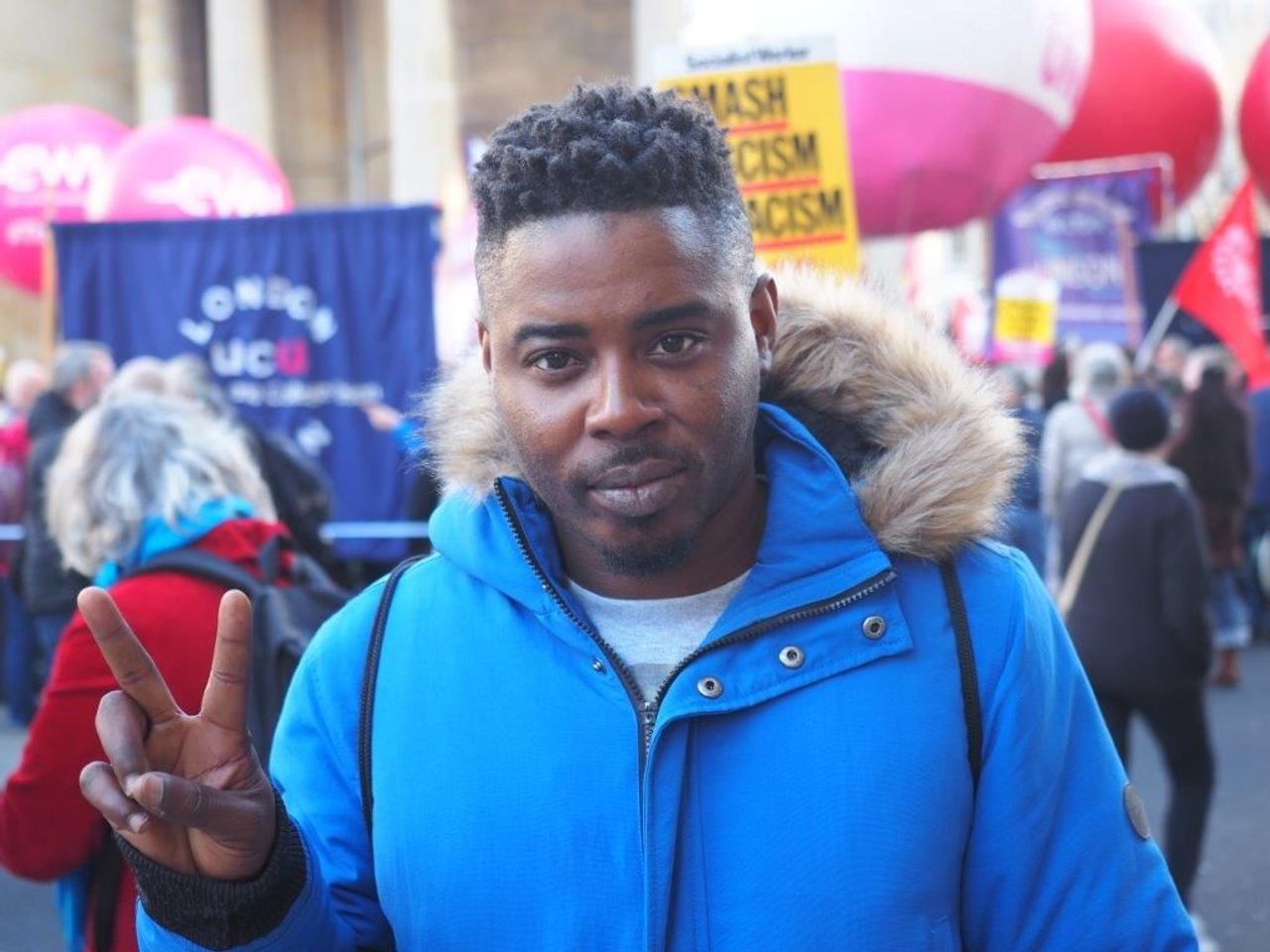 “In this age we all need to be linked and working together and we need to be united. Jobs, housing, the little things we take for granted, they are being taken away and so easily.”

In July, Elliott marched against Donald Trump’s visit to the UK. He said the recent attack on the Jewish synagogue in Pittsburgh was “a shocking event. It’s happening more and more in America and Trump and other politicians just turn a blind eye.”

Elliot said immigrants and workers in America and Britain face a common plight: “It’s really stressful for normal, average working people. It’s the same here, where people are going to food banks. The other day I saw the queen giving a speech about the poor when she was wearing all those jewels and stolen diamonds from Africa, portraying that she cares about poor people!”

Describing the wars waged since 9/11 as “pointless senseless wars that didn’t need to happen”, he said governments in the UK and the US were “killing people and then moaning about people trying to escape from there and come into this country. To be honest, you had the First World War and the Second World War, but the war hasn’t stopped, has it? And we’re in the 21st century now. There is no end to it all, apart from World War III which we don’t want. People want change.” 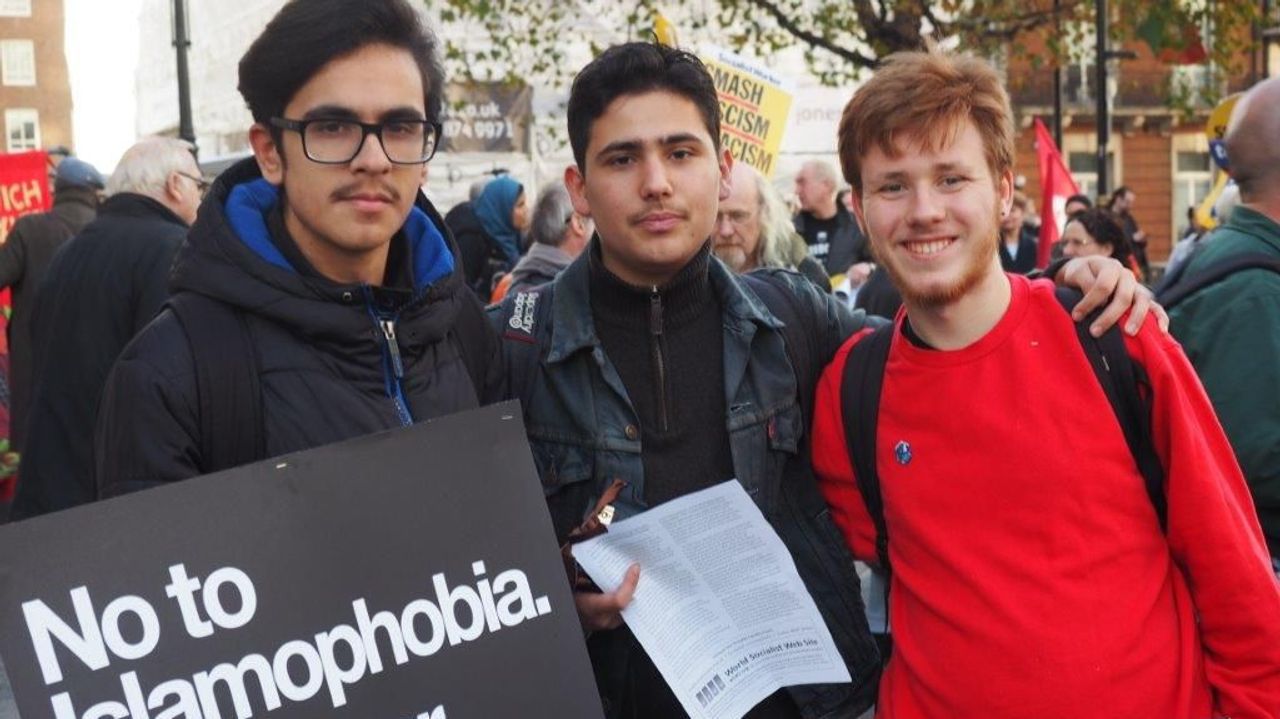 Joe joined the rally with his friends from Barnet, North London. He said, “It’s terrible to see the rise of the far-right. We seem to be going backwards in time and we just can’t let it happen. We have to learn from our mistakes.”

His friend Ben agreed, saying, “Capitalism is causing the problem with refugees and making them the scapegoat. … I particularly didn’t like the comments of Trump that if the Tree of Life synagogue had been armed, they could have stopped the attack by a fascist. Jewish people are being scapegoated and after everything that happened with Nazism, you would think that people would learn from it.”

Giacomo, aged 20, is from Italy. He joined the rally after attending a similar protest in his native Turin two weeks ago: “The situation in Italy now is bad. [Italian fascist Interior Minister Matteo] Salvini is blaming everything on refugees and the atmosphere is hateful. Many young people like me think the same. But many also think like Salvini. There are no longer any right or left parties. They are all the same and they don’t care about working people. It is the same in every part of Europe.” 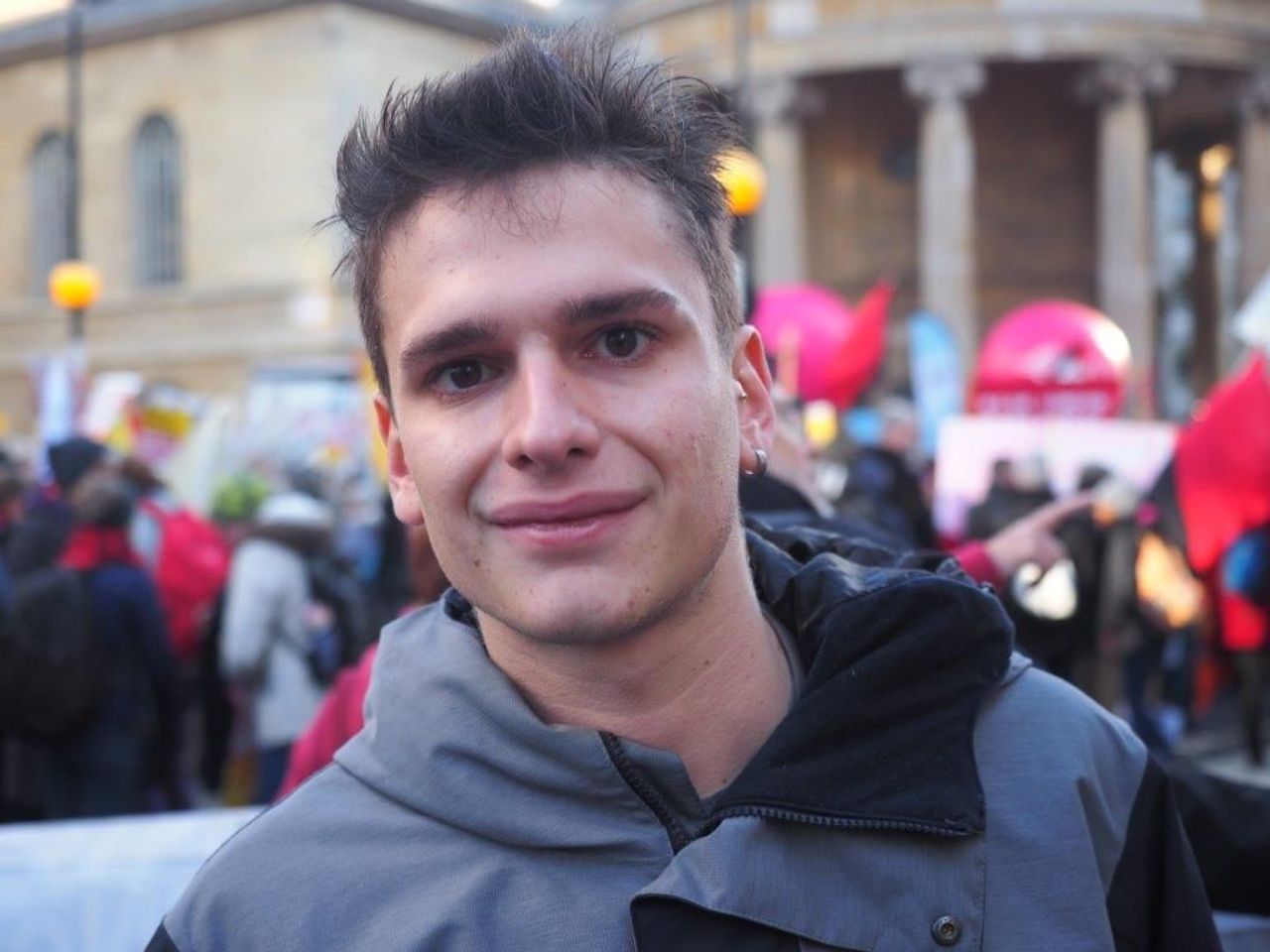 Young people in Italy have no future under the present system, with many forced to leave Italy in search of work. Giacomo expressed his agreement with the fight to unite the working class across Europe and internationally against capitalism and said he would read the World Socialist Web Site.

Ali travelled to the march from Southampton as part of a delegation from the Unite union. He said, “The far right has got to be stopped. It’s growing in Europe and spreading hate and is growing in the UK at an alarming rate. It’s politicians and governments who are scapegoating immigrants and refugees, but it’s the governments that are causing the wars, selling arms to countries like [Saudi Arabia for war in] Yemen. Where are people supposed to go when we’re bombing their countries? It’s the elite at the top that are for fascism. They want us to fight amongst ourselves rather than stand together.”

Victoria, a University of Southampton student, said, “I agree [with the WSWS] that there are parallels with the 1930s with right-wing parties’ views becoming more mainstream. … The media are responsible for the spreading of right-wing views.” 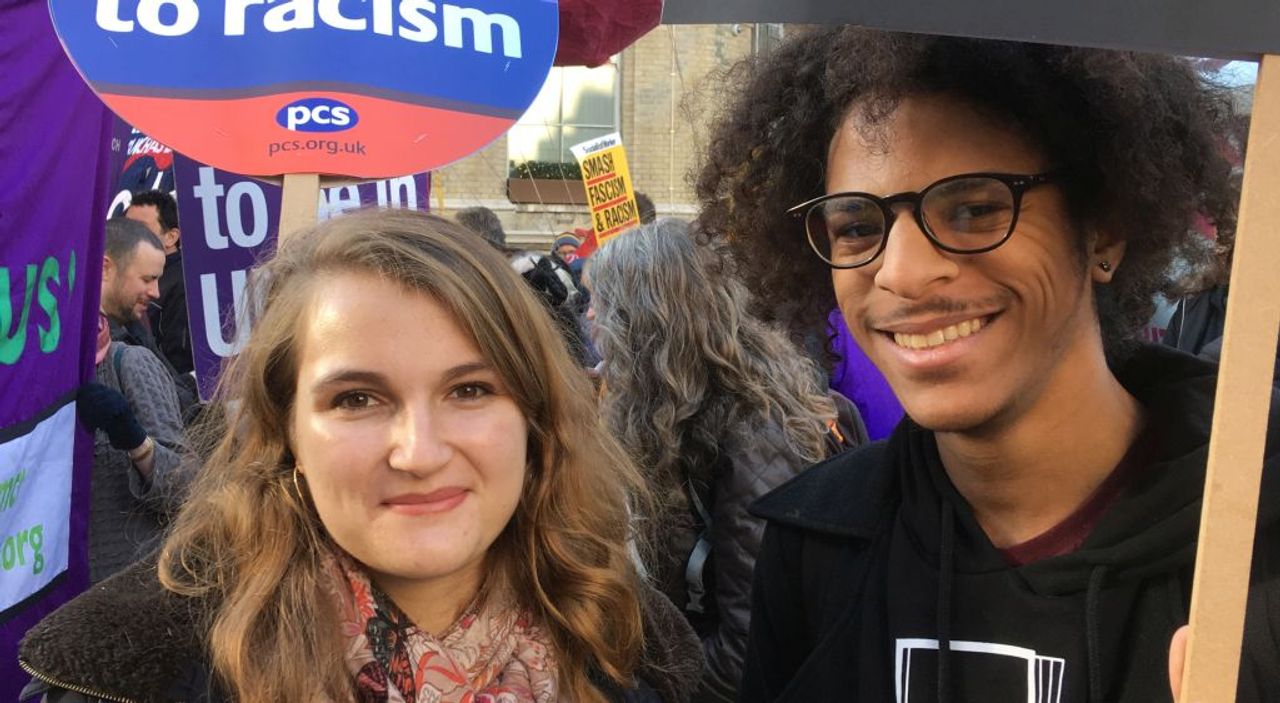 Stephanie, from Queen Anne University, also said there were parallels with the 1930s: “I definitely see the tactics they are using are more open. There has been a spike of far-right speakers in university campuses. This was seen with Steve Bannon speaking at Oxford University. We have had [Tory right-winger] Jacob Rees-Mogg at our university. It emboldens the fascists already in society.”

She said governments “put themselves under the banner of nationalism, but it’s leading to fascist ideologies. The way politicians use data and statistics on immigrants and migrants as their tools to win support in general elections, pulling in a wider group of people who may not be racist but are being taken on the wave of anti-immigrant ideas, which then emboldens the far right.” 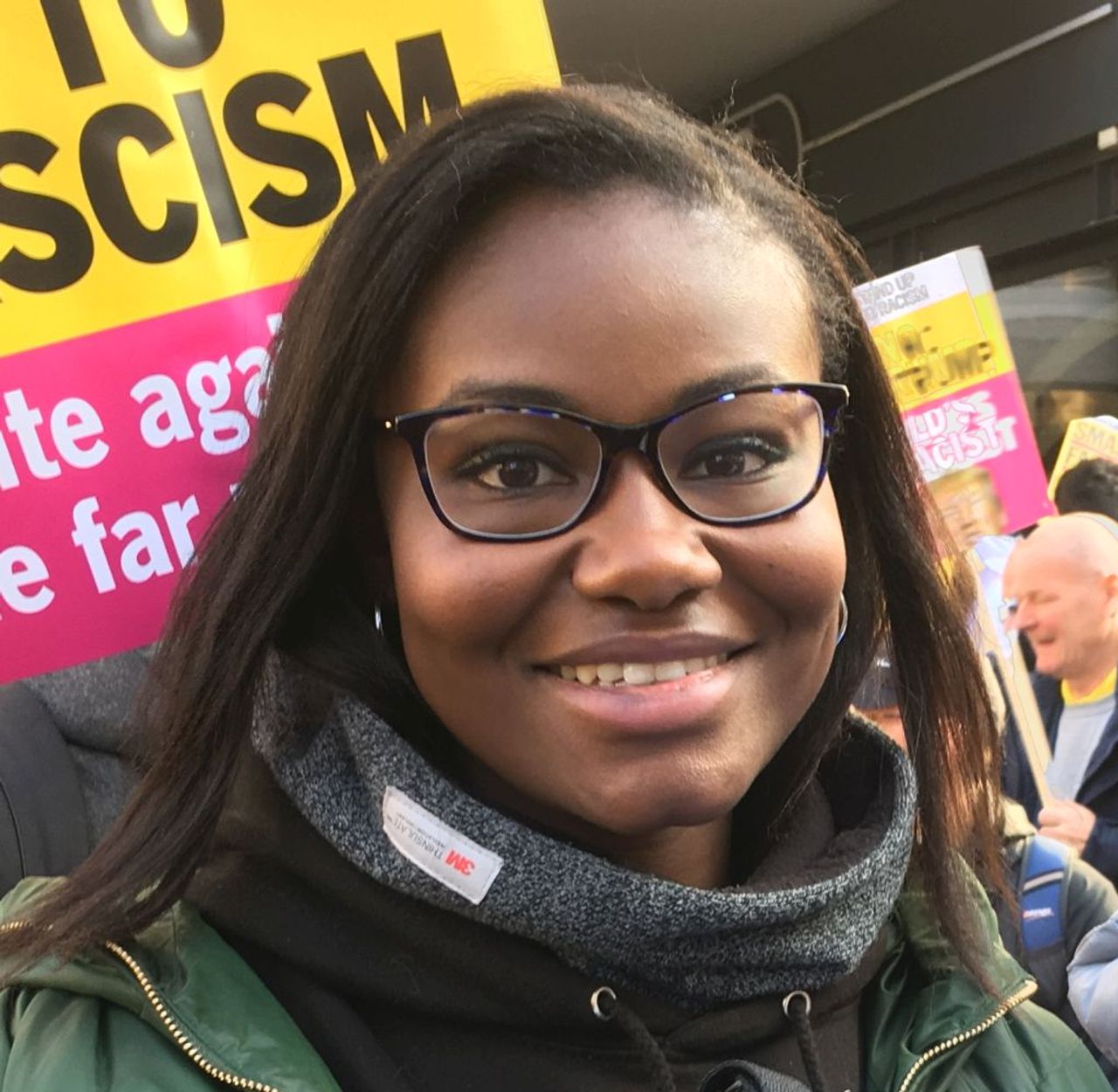 On the Labour Party she said, “Jeremy Corbyn has conceded on so much because of the inherited problems within Labour. I don’t think he has stood up for far-left ideas. I am not happy about his role. Corbyn presented a voice for socialism, but has gone back on a lot of the promises he made. Support for him is on a very loose thread.”

Samuel is a journalism student from Southampton. On parallels with the 1930s he said, “In Britain it could easily get that extreme with the way things are going very quickly. Everyone needs to stand to fight together against racism. I think there is the false narrative that the working class is racist, but that is not the case. The working class are the people standing up to racism today!”

Lena and Caitlin are students originally from Iraq. Lena said, “There is a lot of ignorance and people are not being educated to see what the cause of social problems is. They are particularly targeting Muslims with the Islamophobia.

“Theresa May and all the governments are corrupt. They do not represent anyone except the rich.”

Caitlin said, “I see some comparisons with the 1930s in terms of the scapegoating of migrants and refugees and Muslims. The media whips it up. When a white supremacist carries out a massacre in a church or synagogue, they say it is just the product of individual mental illness. However, when it is [what they call a] a terror attack [if the perpetrator is a Muslim] they blame all Muslims and Islam.

“People need to be educated. The main problems in society are caused by the government and the economic and social system we are living under, which favours the wealthy.” 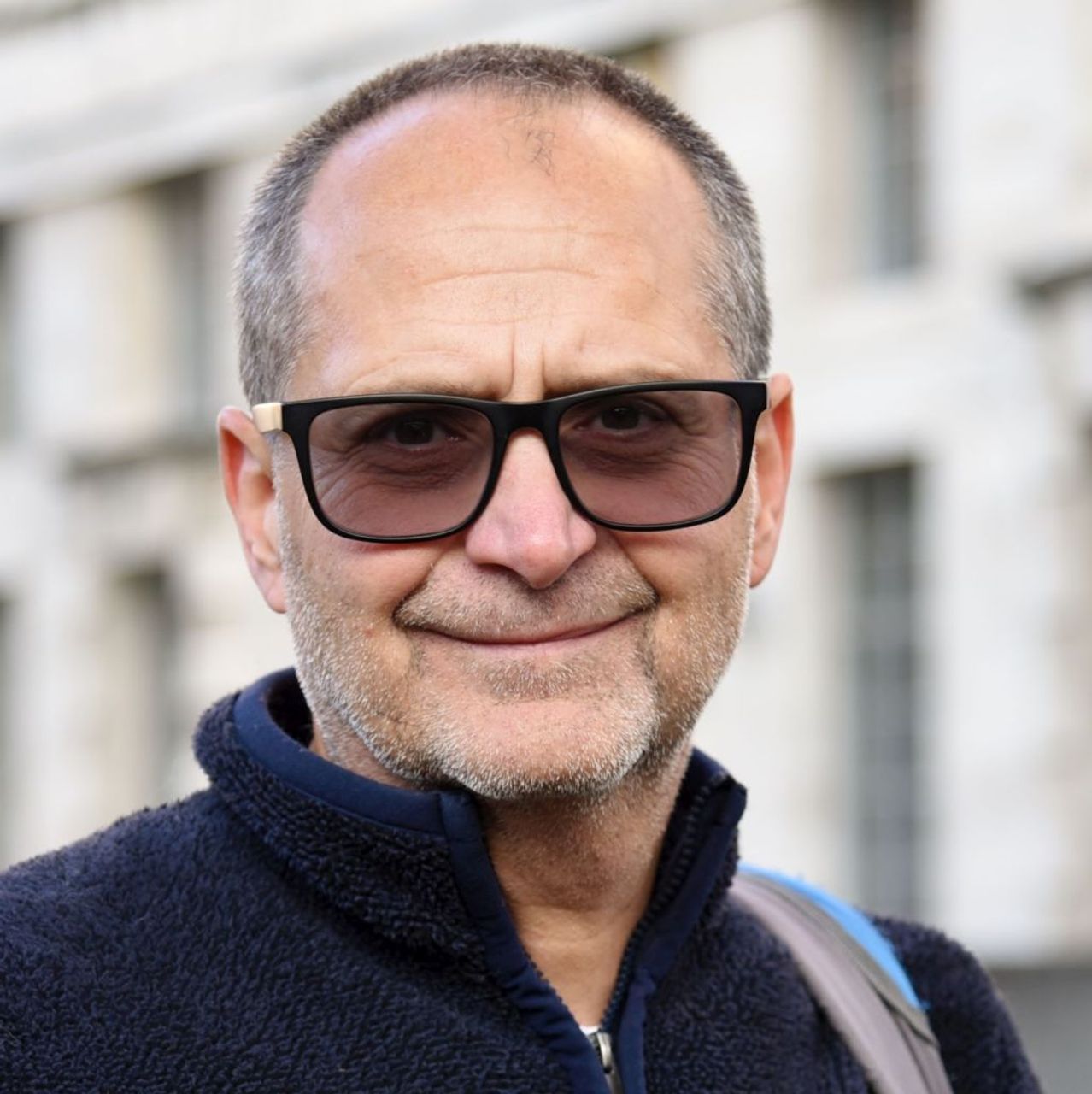 Neal, from Kent, said, “The far-right use immigration and poverty to whip up hatred. We are seeing history repeat itself, which is very frightening. I support a humane society that does away with borders and boundaries. Why do we need them in the first place? We are one world. If a richer nation is able to produce more food, capital and so on then we should be able to share. We throw so much away and destroy so much when people are starving and struggling in the world.”

Kevan, from Kings College London, said, “What we see now is a general discontent with capitalism. There is austerity, neo-liberalism, laissez-faire capitalism, which was rampant in the 1930s. Far-right sentiments arise from this discontent with the economic situation. The establishment has generated this crisis.”