This video is about the 10 November 2018 trade union demonstration in Amsterdam, the Netherlands.

By Harm Zonderland in the Netherlands:

On Saturday, November 10, 10,000 people protested against the pro-corporate policies of the liberal-conservative government of Prime Minister Mark Rutte (VVD), which has been in power for a year. The government has already lowered corporate taxes, and is about to increase taxes on basic supplies, such as foodstuffs and medicine. One particular plan sparked most public outrage: the abolition of dividend taxes, a handout of 1.9 billion euro to shareholders.

The demonstration on the “Dam” square in Amsterdam was organised by the trade union federation FNV and its Christian counterpart CNV. FNV chairman Han Busker … delivered the opening speech. He declared, “We’re not going to stand for this. We do not accept that the money is spent on the companies and the rich, but not on the people. We do not accept that banks are bailed out, but hospitals are allowed to go bankrupt.” 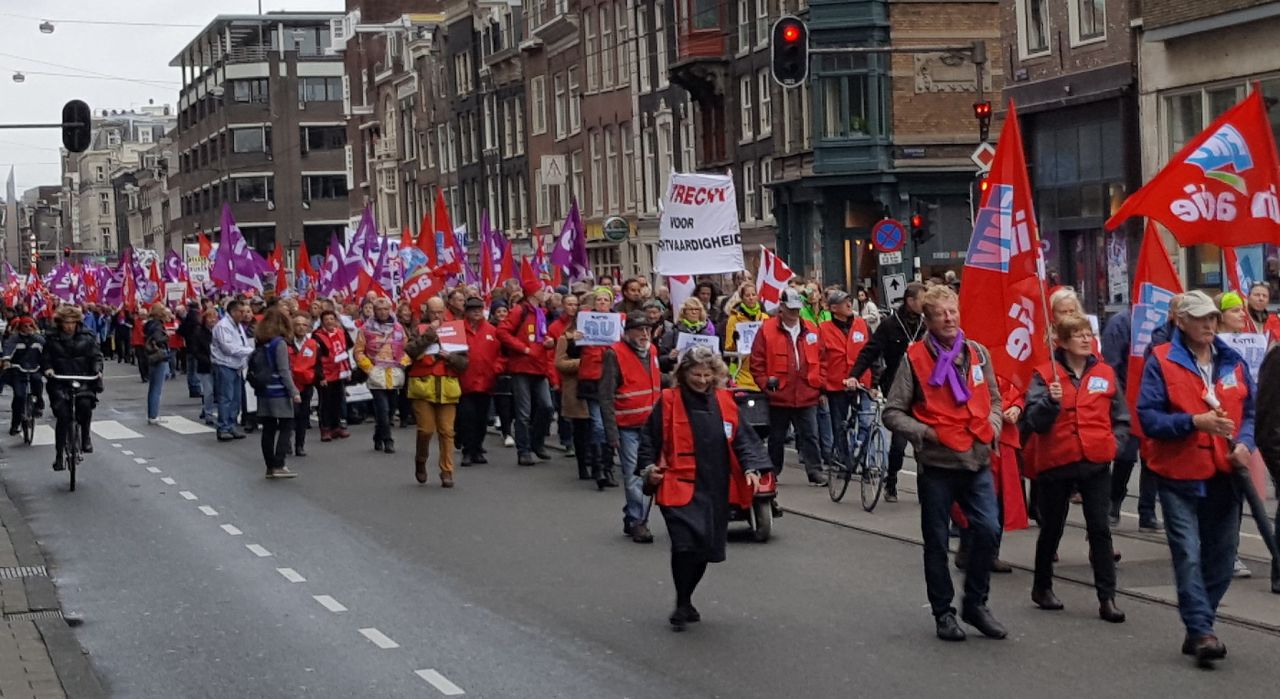 Recently, in the course of just three days, five hospitals and a labour clinic went bankrupt. Patients were moved out and relocated, which led to at least one life-threatening situation.

“Just a month ago, the government thought it was a good idea to abolish dividend taxes. We, together, protested and this ridiculous idea was off the table”, Busker claimed. …

The tax handout was included in the coalition agreement of Rutte’s government on the behest of a lobby of influential Dutch companies, such as Shell Oil, foodstuffs giant Unilever, medical and electrical equipment maker Philips, plus the employers’ organisation VNO-NCW. Prime Minister Rutte, who felt “with every fiber in his body” that this was the right thing to do to create the right “climate” for multinationals to settle and bring in jobs, strongly supported it. …

Living conditions for ordinary workers have drastically deteriorated under Rutte, who has been Dutch prime minister for eight years at the head of shifting coalitions of parties. Nowhere else has the number of “flexible” temporary contracts increased as much as in the Netherlands.

Since 2008, there has been a shortage of 10,000 new homes and apartments every year. In the northern province of Groningen, houses are literally shaken apart by earthquakes, which increase in frequency and intensity due to natural gas extraction. Earlier this year, a secretive deal between the state tax service and Shell, which exploits the gas fields, was exposed. Apparently, Shell was able to avoid paying dividend taxes since 2005.

This assault on the working class will continue. Corporate taxes, which now stand at 25 percent for large companies and 20 percent for small to medium-sized companies, will be reduced gradually to 20.5 percent and 15 percent, respectively. Company directors will see a tax cut on corporate loans. Investments in research and development will also be taxed less.

Furthermore, starting in 2021, some 200 million euro will be allocated annually towards reducing the cost of labour. This might include cuts to social security benefits or holiday and Christmas bonuses. All these measures total up to about 1.9 billion euro, the same sum the abolition of dividend tax would have cost. 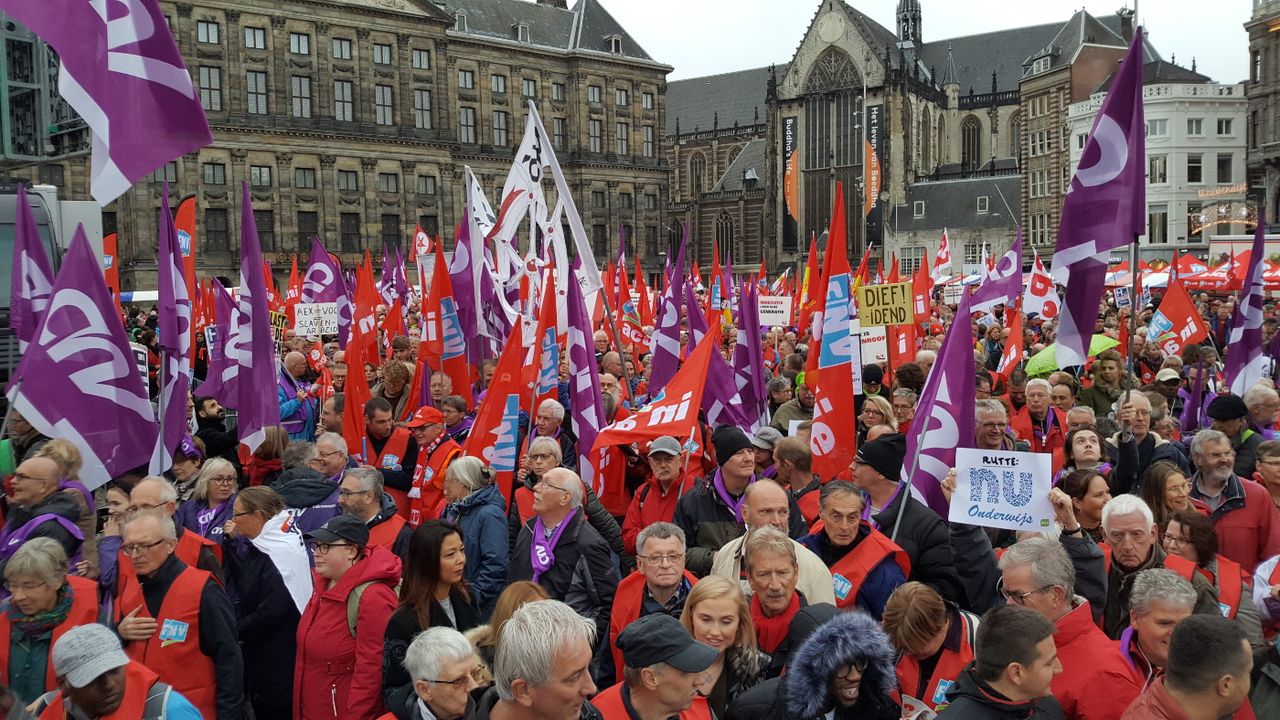 The demonstration on Dam square was followed by a protest-march through the city towards the Museum square, where it ended after a brief closing speech by a union official.

FNV chairman Han Busker, in his opening speech, appealed many times to the government to pursue a more social-democratic instead of a neo-liberal policy. But social democracy today is a nationalistic dead end, abolishing all the social reforms of the past.

During the protest march, many people voiced concern and anger over the government’s spending of taxpayer money on companies and international shareholders. …

Most of those on the demonstration had still some faith in the trade unions, and thought that the government will eventually listen to the public, if these demonstrations grow in frequency and proportion.

A janitor at a public school, who has a minor disability, told the WSWS that he is paid according to his productivity. His wage is below the legal minimum and is supplemented by the social-welfare institution UWV, towards the minimum income. “What is a minimum wage good for, if employers can find a way around and still pay you less?” he asked.

Max, a young chef who works at a restaurant in the southern province of Zeeland, said that he is participating in the demonstration because the government works for big business, not the people. Max said that Dutch politics was shifting to the right, even to the extreme right, and that workers need an “extreme left party” to counter that. One of his thoughts was that a state-funded, basic income would be a great first step towards income equality, so people could really develop their talents and pursue their interests.

1 thought on “Anti-austerity demonstration in the Netherlands”