Sorrell Bobrink, whose neighbourhood has been completely destroyed, fled the town of Paradise with her son and pets. She described a journey through roads surrounded by flames and feelings of chaos and shock at how quick the fire took over.

After burning for more than one week, the Woolsey Fire near Los Angeles has destroyed over 98,300 acres, approximately equal in size to the city of Denver, Colorado. The fire prompted the evacuation of more than 295,000 people and is responsible for three deaths thus far. An estimated 504 structures have been destroyed and an entire section of the Pacific Coast Highway remains closed.

As new details emerge of the Woolsey Fire’s devastation, the death toll in Northern California’s Camp Fire jumped to 63 on Thursday with the number of missing increasing to 631. The Camp Fire is now the deadliest wildfire in California history. More than 11,862 structures have been destroyed as of this writing. The Camp Fire completely destroyed the town of Paradise in the Sierra Nevada mountain foothills leaving more than 26,000 residents with no homes to return to.

Only one day before the fire started, the Thousand Oaks community was devastated by a mass shooting of mainly college students at the Borderline Bar and Grill, ending with the deaths of 13 people. This was one of the 20 most deadly mass shootings in US history and the second deadliest in the state of California.

Although still severely traumatized by the shooting, survivors were forced to flee the oncoming flames only one day later.

The weakening of the Santa Ana winds over the past two days has reduced the intensity of the Woolsey Fire, which is now at 57 percent containment.

Evacuation orders have been lifted for many of the affected areas although some of the most heavily affected, including the upscale seaside community of Malibu, are still closed. The fire still threatens approximately 57,000 structures and full containment is not expected until November 18. More than 3,200 firefighters had been mobilized to fight the fire as of November 10.

Aside from the immediate impact of the fires, there will likely be long term health consequences for the affected residents.

It is believed that the Woolsey Fire originated at the Santa Susana Field Laboratory in Simi Valley, California. In operation between the late 1940s and early 2000s, the site performed numerous large-scale experiments in rocket propulsion as well as nuclear energy research.

Many of these experiments pre-dated current regulations governing nuclear and toxic waste disposal, and the site became the first commercial nuclear power plant to experience a core meltdown in 1959. That incident was covered up by the US Department of Energy for more than 10 years.

Initial ground readings at the site indicated no elevated levels of radiation as a result of the fires, although further tests are still needed.

Many area residents believe the site already posed an unacceptable health hazard to the community. An accelerated public campaign to clean up the site was begun after higher than average rates of leukemia, brain cancers and neuroblastoma were found among children in the surrounding area.

Public anger is also growing against the Southern California Edison Company, which provides electrical service to the region. The California Public Utilities Commission (CPUC) recently reported that SoCal Edison experienced a transmission line failure near the Susana Field Laboratory which may have started the fire. At the time, SoCal Edison released an automatic alert to the CPUC indicating that a circuit breaker tripped, likely due to transmission overload.

Although it has yet to be determined if such an event caused the fire, prevailing environmental conditions, including high winds, extremely low humidity and an abundance of dry and dying chaparral, provided a seemingly limitless supply of fuel in the mountainous terrain.

Reporters for the World Socialist Web Site found that firefighters may have also had insufficient water and water pressure to fight the fires. At the evacuation center at Pierce College in Woodland Hills, California, WSWS reporters spoke with residents angry that water hydrants malfunctioned in their neighborhood of Corral Canyon in Malibu. Marcela Laurenze said: “Because this water hydrant failed, the neighbors couldn’t get the water to save the houses. We are all furious. My neighbor Paul Morra basically created his own fire station in the canyon. This is negligence by the water department.”

Paul Morra wrote on his Facebook page: “We had no water for the fire front or for the hot spots that followed many days later. Neighbors were forced to tackle fires with just shovels and dirt.

“With 18 homes lost in Corral Canyon alone and with residents still under a mandatory evacuation, Las Virgenes Water District has no problem sending their crews out to read meters for billing purposes.

“This is an outrage, and our community is going to hold them accountable. This is beyond shameful and completely insensitive.”

Marcela and her family have been staying at the Red Cross evacuation center for three days. She had successfully built up a small business designing jewelry. She told the WSWS: “My whole house is gone. I haven’t seen it because they won’t let us back in yet. I’ve lived there since 2002. It was the only home I ever had that I paid for myself.

“Last month I moved my whole family down from Oregon to live with me because they were homeless. My mother Shari is 71, and she’s sick. And I have my brother, his two adult children, two grandkids, and two dogs.

“I had a three-bedroom home. One person slept in the garage, three girls slept in the loft, others on the main floor and downstairs.

“I survived the 2005 fire. Then I ran up and down the street yelling to my neighbors to get out. This time somebody called me. I just cared about getting the kids out. We got the whole family out; no clothes, no nothing. And now we’re all homeless.”

Emely Taylor is Marcela’s neighbor. She said: “I just found out that everything to do with my business is destroyed. I created my own consulting firm in the entertainment industry, doing makeup and wardrobe. My entire computer system, software, hardware, laptops, my suits, thousands of dollars of makeup and clothing. I’m never going to get that back. Now it’s all gone.

“Not only that, I had many family antiques from the Middle East and Israel. Things that were passed down in my family.”

She blamed the utility companies for the immense damage caused by the fire: “This is negligence on the part of these utility companies and the government. This fire has destabilized all these people’s lives. Marcela’s mom is a 71-year-old grandmother who is really sick. She can’t walk, and there’s no proper bed for her here. Everybody is stressed out. Everybody here is homeless.

“Their negligence has caused hundreds of thousands of dollars in damage, affecting so many people’s lives and livelihoods.

“Most of the people helping here at the Red Cross have been really nice to us. But now that most people have left, a few of them are making us feel that we’re not welcome here. They’re supposed to help us get back on our feet. People are already stressed out, some suicidal because they’ve lost everything. I told them if they’re not nice to us, I will hold them responsible if someone hurts themselves.” 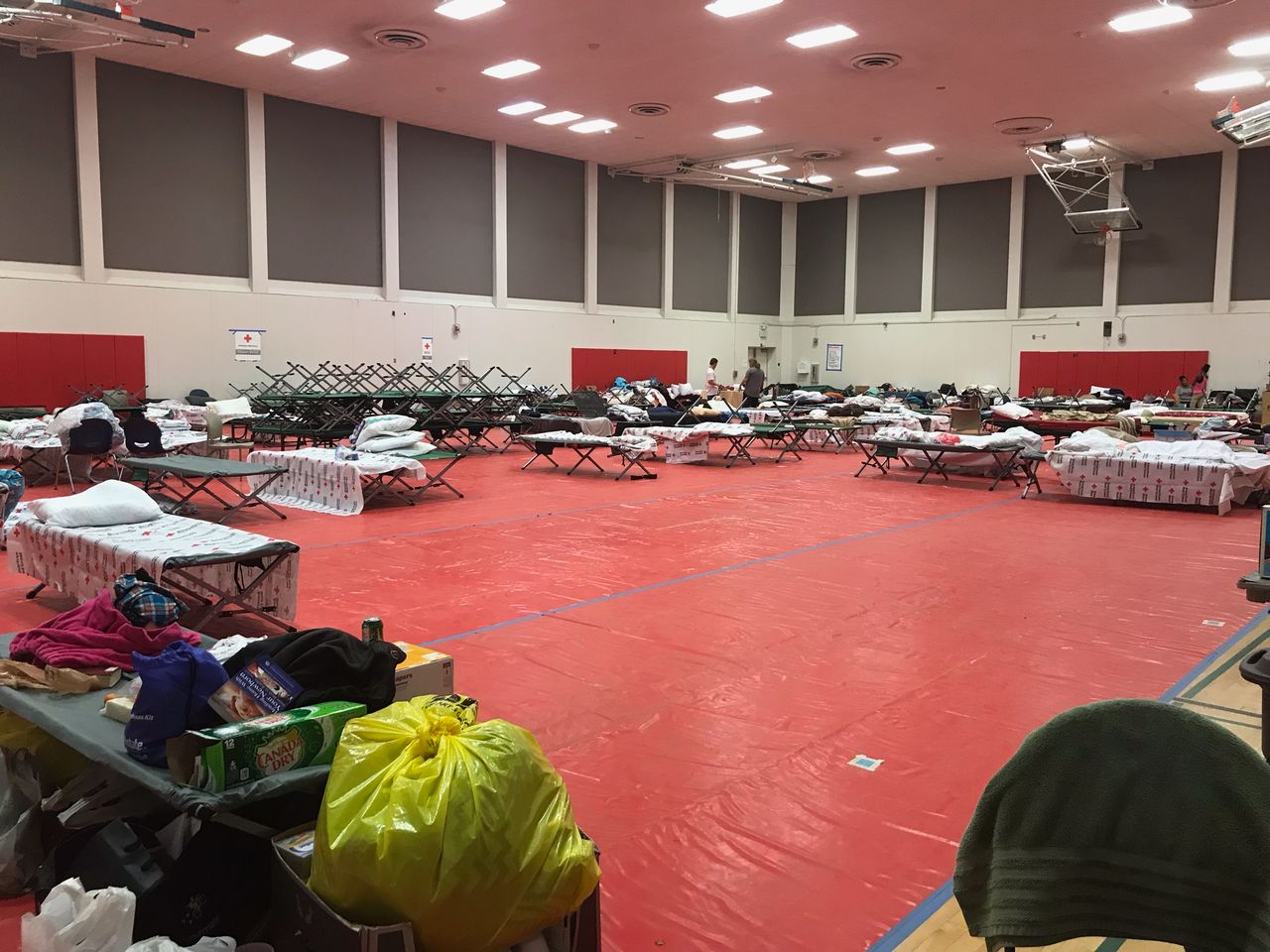 The WSWS also spoke with Ellis Levinson, the media liaison for the Red Cross. He showed us the room where people sleep. “As long as people need shelter, we will be here. We provide three meals a day, showers, and a place to sleep,” he said.

“At the height of the fires starting last week, we had 700 people here. We’re using three gyms here at Pierce College. We have a lot of people volunteering to help from the outside, 45 came in this morning.

“I was at the Napa Valley fire in 2017, and I was helping in San Antonio during Hurricane Katrina in 2005. That was the most immense thing. We were in a stadium that was seven acres.”

MORE THAN 600 MISSING IN CALIFORNIA The death toll in Northern California’s Camp fire rose to at least 63, as rescue workers continue to search through the devastation. An additional 631 people remained unaccounted for — a vast increase from previous estimates. [HuffPost]