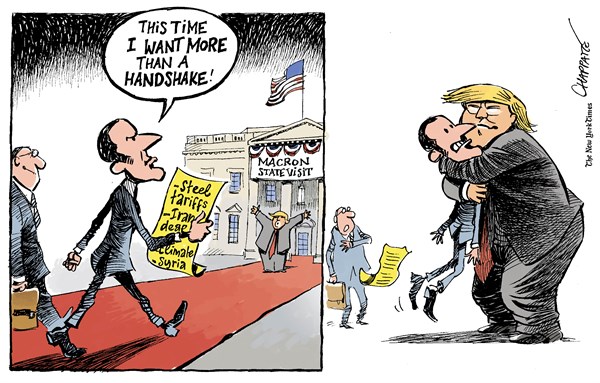 After as clash, Trump and Macron agree about bigger European contribution to NATO

United States President Trump and his French counterpart Macron agree that Europe should contribute proportionally more to the NATO budget. That is what the two leaders said at Trump’s arrival at the Élysée Palace in Paris.

Trump is in France for the big, two-day commemoration of the First World War. This weekend is exactly one hundred years ago that the Great War ended.

Prior to the visit, the heads of state seemed to be heading for a clash. Macron said in an interview that Europe must protect itself against China, Russia and also the United States. On Twitter, Trump called that suggestion “very insulting.”

President Macron of France has just suggested that Europe build its own military in order to protect itself from the U.S., China and Russia. Very insulting, but perhaps Europe should first pay its fair share of NATO, which the U.S. subsidizes greatly!

The Élysée called the collision today “a misunderstanding”. …

Trump and Macron paper over differences in Paris meeting https://t.co/H2PPDgdSiA

Trump and Macron have an ambivalent relationship. …

This year the relationship flourished, when Macron became the first foreign leader to make a state visit to Trump.

Emmanuel Macron suggests building its own army to protect Europe against the U.S., China and Russia. But it was Germany in World Wars One & Two – How did that work out for France? They were starting to learn German in Paris before the U.S. came along. Pay for NATO or not!