This 8 September 2018 photo shows Engelmansplaat desert island, or sandbank, in the Netherlands. We went there the day after 7 September.

Before arriving there, we went first to the eastern side of Lauwersmeer national park. There were groups of ruddy shelducks, barnacle geese and teal. Barn swallows flying overhead.

We continued to the Jaap Deensgat hide. Seven spoonbills flying. A grey heron and a great egret close together. Wigeons.

We arrived at Lauwersoog harbour.

A lesser black-backed gull on a pole. Herring gulls and black-headed gulls on quays.

A turnstone. A redshank near the exit of the harbour.

A Sandwich tern flying over the Wadden Sea.

We pass the Kuipersplaat sandbank where harbour seals rest. A grey seal swims in front of them.

A male eider duck flying above them.

We wade to the Engelsmanplaat sandbank, in the direction of the only building, the wildlife warden’s place. 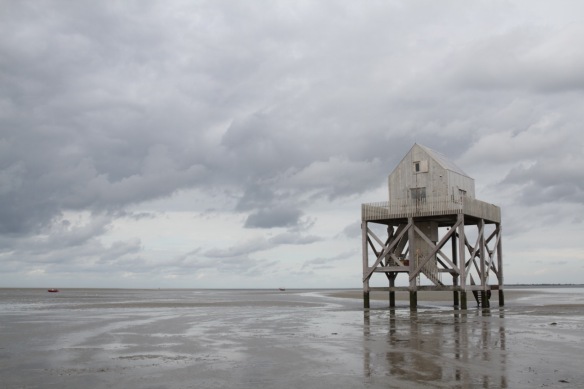 We arrived at the warden’s place with very wet shoes and trousers.

A wooden staircase between platforms goes to the top, where the wardens are safe from flooding. The wardens don’t live there in winter, so then Engelsmanplaat is really a desert island; or sandbank.

It used to be more like an island, but by now the sea has washed away most of its small sand dunes. Even at low tide most of the Engelsmanplaat is still under a few centimeters of water. Only a very small part is not under water at normal high tide. The only birds nesting there this year were an oystercatcher couple. Three times, unusually high water destroyed their nests. But the birds persevered, and their chicks fledged.

At one of the higher spots, stones, relics of an old building. The stones are covered with barnacles.

To the north of Engelsmanplaat is another sandbank, with more rights to be called an island, and more nesting birds: het Rif.

But that is for the sequel to this blog post.