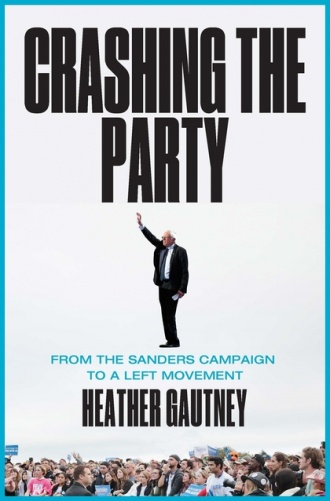 By John Haylett in Britain:

A new book shows how Bernie Sanders’s challenge to the Democratic Party machine during the 2016 US election presaged a ground-breaking shift in progressive politics, says JOHN HAYLETT

Crashing the Party: From the Bernie Sanders Campaign to a Left Movement

Clinton’s subsequent defeat by a tax-dodging, anti-union, racist xenophobe claiming to speak for “blue collar” workers underlined the scale of the own-goal scored by the Democrats, when every opinion poll concurred that Sanders would have thrashed Donald Trump.

Unfortunately, Sanders was unable to overcome the hostility of the Democratic Party bureaucracy and its so-called super-delegates who embraced Clinton’s candidature from the outset and tipped the balance against the crowd-funded and crowd-mobbed senator from Vermont.

This book’s author Heather Gautney was a policy fellow working in his Washington office and a volunteer researcher and organiser on his campaign.

She was there when he first laid out his presidential stall in front of 5,000 supporters on the banks of Lake Champlain in his home state, saying: “Now is not the time for the same old establishment politics and stale inside-the-Beltway ideas.”

He dismissed the idea that the election was about individuals, asserting: “This campaign is about the needs of the American people and the ideas and proposals the effectively address those needs.”

Sanders was as good as his word, rejecting tired formulas and honeyed words designed to camouflage the convergent policies of the two old parties.

His first departure from normality was in refusing corporate finance and relying on a plethora of small donations from voters wanting change.

Turning his back on big business made it easier to reject Barack Obama’s Trans-Pacific Partnership, which was lapped up by consistent free-trader Clinton and opposed by Trump.

Sanders pointed out that unfettered free trade incentivised manufacturing companies to close down US operations and ship out to Mexico, China and other lower-wage economies.

His policies on education and health illustrated the gulf between him and Clinton, who could not conceive of public services being provided without private profit playing a role.

Because of this alternative approach, Sanders managed to detach some union leaderships away from the traditional knee-jerk response to back the Democratic Party front-runner, irrespective of their political attitude to issues of concern to trade unionists.

And Sanders’s clear position of opposition to race, gender or class discrimination broadened his appeal but, in the long run, he lost, causing Gautney to ponder the future.

She hopes her assessment will be one of many, noting that, while the Democrat establishment crashed in 2016, the defeat “opened a door for the party to reconstitute itself.”

Something is stirring in the US, with a small number of self-styled democratic socialists and even pro-Palestinian activists upsetting the Democratic applecart in party primaries.

Sanders’ wife Jane Sanders has set up the Sanders Institute, dedicated to “transforming democracy through research, education, outreach and advancement of bold, progressive ideas and values.”

Gautney says: “Our revolution, the successor to the Bernie campaign, is attempting to bridge the movement-electoral divide by rooting local and state electoral campaigns in movement organisations and advocacy groups.”

Her optimistic forecast is that, “in 2020, if not before, the line between politicians paying lip service to social justice versus those willing to fight for a truly egalitarian distribution of wealth in America will once again shape the outcome of the election.”

An encouraging and informative insight into the Sanders campaign and what follows.

3 thoughts on “Bernie Sanders and the US Democratic party, new book”