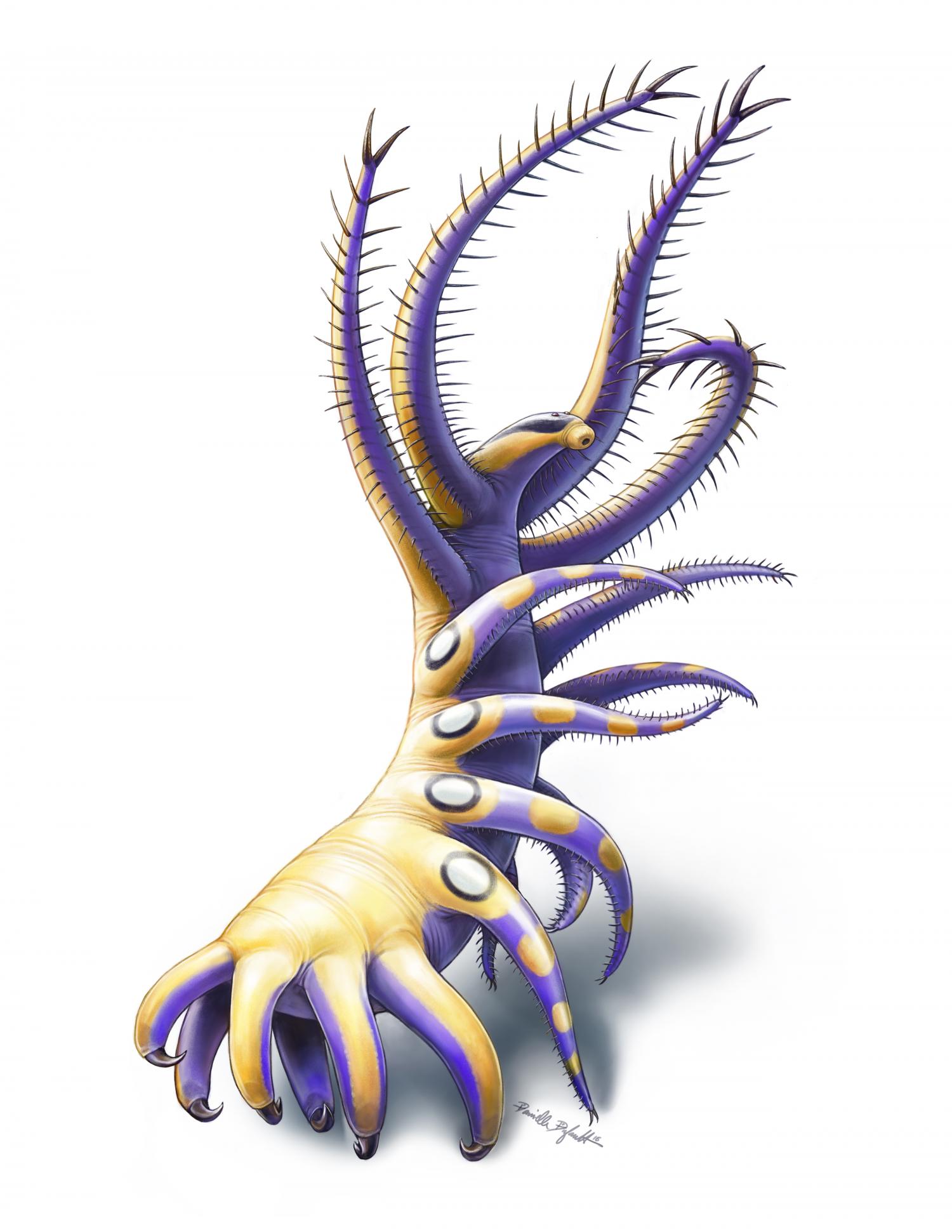 A new species of lobopodian, a worm-like animal with soft legs from the Cambrian period (541 to 485 million years ago), has been described for the first time from fossils found in the Burgess Shale in the Canadian Rocky Mountains. Details of the new species, called Ovatiovermis cribratus, are being published in the open access journal BMC Evolutionary Biology this week.

Scientists have discovered a new species of lobopodian, an ancient relative of modern-day velvet worms, in 430 million-years-old Silurian rocks in Herefordshire, UK.

The team, comprising researchers from the universities of Oxford, Yale, Leicester and Manchester, and Imperial College London, has been able to three-dimensionally reconstruct the exceptionally well-preserved fossil using digital technology.

The research is reported in the Royal Society journal Open Science.

First author Derek Siveter, Professor Emeritus of Earth Sciences at Oxford University and Honorary Research Associate at Oxford University Museum of Natural History, said: ‘Lobopodians are extremely rare in the fossil record, except in the Cambrian Period. Worm-like creatures with legs, they are an ancestral marine relative of modern-day velvet worms, or onychophorans — predators that live in vegetation, mainly in southern latitudes.

‘We have been able to digitally reconstruct the creature using a technique called physical-optical tomography. This involves taking images of the fossil at a fraction of a millimetre apart, then “stitching” together the images to form a “virtual fossil” that can be investigated on screen.’

Professor Siveter and colleagues have been carrying out fieldwork in Herefordshire since the mid-1990s. The sedimentary deposit in which it was discovered has since become known as the Herefordshire Lagerstätte, the term Lagerstätte indicating that it contains exceptionally preserved fossilised remains of soft-bodied animals. The fossils were deposited 430 million years ago within a marine basin that extended across what is now central England into Wales, and they are preserved in nodules in a soft, cream-colored volcanic ash mixed with marine sediment.

Professor Siveter said: ‘Thanahita distos and the other animals that became fossilised here likely lived 100 to 200 meters down, possibly below the depth to which much light penetrates. We deduce this because we found no vestiges of photosynthetic algae, which are common in contemporaneous rocks laid down at shallower points on the seafloor to the east.

‘Some special circumstances allowed for their remarkable preservation. The first was the immediate precipitation of clay minerals around the dead organisms, which decayed over time, leaving empty spaces behind. The mineral calcite — a form of calcium carbonate — then filled these natural moulds, replicating the shape of the animals. Almost at the same time, hard concretions began to form, being cemented by calcite. Thanks to the early hardening of these Silurian time capsules in this way, the fossils were not squashed as the ash layer slowly compacted.’

He added: ‘Some lobopodians lie in a position on the tree of life which foreshadows that of the terrestrial velvet worms, while others are precursors of the arthropods: the “king crabs”, spiders, crustaceans and related forms. Since its discovery, the Herefordshire Lagerstätte has yielded a diversity of arthropods that have contributed much to our understanding of the palaeobiology and early history of this very important invertebrate group. The lobopodian Thanahita distos belongs to an extended, panarthropod grouping.

‘Further, morphological analysis places it within a lobopodian group that typifies an earlier period of geological time in the Cambrian — about 520 to 510 million years ago — thus indicating the survival of this group over some 100 million years.’

An ancient invertebrate used the unlikeliest of means to make sure its offspring stayed near mom. The “Kite Runner” kept its young close literally by a thread https://t.co/vRt6Hw1opC