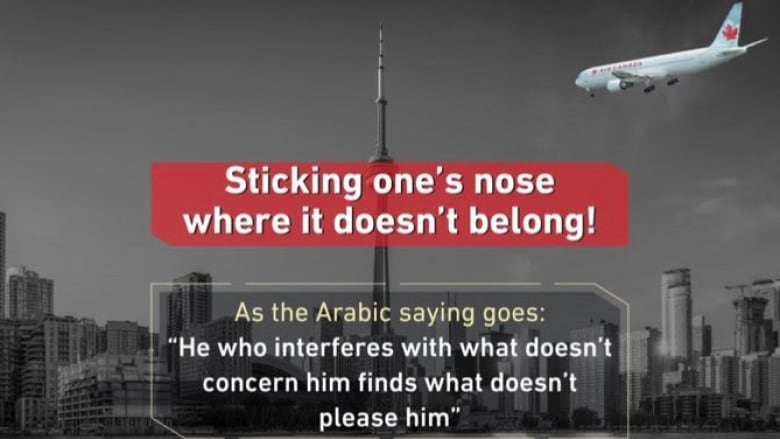 A group in Saudi Arabia apologised and deleted a Twitter post showing an image of an Air Canada passenger plane veering towards Toronto’s tallest skyscraper with a warning against meddling in others’ affairs.

Some on social media noted the image was reminiscent of scenes during the September 11, 2001, attacks on the United States, when nearly 3,000 people were killed by 19 hijackers – 15 of whom were Saudi nationals – who flew airliners into the World Trade Center’s twin towers and the Pentagon.

The controversial tweet came amid an escalating diplomatic dispute between Canada and Saudi Arabia after Ottawa denounced Rihadh’s imprisonment of human rights activists.

Infographic KSA [Kingdom of Saudi Arabia] … published the image of the airliner with the warning: “He who interferes with what doesn’t concern him finds what doesn’t please him.”

The infographic also accused Canada of “sticking one’s nose where it doesn’t belong”.

The tweet was subsequently translated to English and French and retweeted hundreds of times before it and the account were deleted. …

After Ottawa’s criticism, Saudi Arabia also froze new trade and investment with Canada worth billions of dollars and ordered 15,000 Saudi students not to attend Canadian universities.

Al Jazeera contacted Canada’s Ministry of Foreign Affairs for comment about the tweet but at the time of publication had not received a response.

Saudi Arabia has always denied any involvement in the 9/11 attacks, which sparked the “global war on terror” that led to the invasions of Afghanistan and Iraq.

Families of the victims have spent years lobbying US politicians for the right to sue the kingdom in American courts, claiming Riyadh helped plan the hijackings.

Evidence submitted as part of a class action lawsuit against Saudi Arabia last year alleged Saudi’s embassy in Washington, DC, may have funded a test run for the deadly attacks. …

Infographic KSA has more than 350,000 followers on Twitter. Few social media accounts, NGOs, or Saudi citizens are permitted to openly discuss politics in the kingdom on such a global platform.

According to the Canadian Broadcasting Corporation, Infographic KSA ‘has a history of posting messages that are supportive of the Saudi government’.

Protests are banned as are political parties in the Gulf nation. Unions are illegal and the press is heavily controlled with criticism of the royal family leading to prison.

Last year, the kingdom urged its citizens to report subversive comments found on social media via a phone app, a move denounced by Human Rights Watch as “Orwellian“.

According to the watchdog, more than a dozen female activists have been targeted by Saudi authorities since May, in what was described as an “unrelenting crackdown on the women’s rights movement“.

Specifically the women’s movement for the right to drive cars.

The 32-year-old has been well-received by the administration of US President Donald Trump.

But the crown prince‘s actions have caused some resentment in Saudi Arabia and the wider Middle East over high unemployment, the ongoing war in Yemen, the illegal blockade of Qatar …