Thousands of women marched in a protest against U.S. President Donald Trump’s visit to the U.K. on July 13. The march paraded down Regent Street, through Piccadilly, onto Trafalgar Square finishing up at Parliament Square.

This Canadian TV video says about itself:

Anti-Trump protests greeted the U.S. president in London, putting Prime Minister Theresa May in a tough spot. Much of Britain has
voiced their opposition to Trump’s visit.

RT’s Anastasia Churkina reports from Westminster where the Donald J. Trump baby balloon has been flown ahead of mass protests expected in London today.

By Chris Marsden in Britain:

The huge protests in London and elsewhere in the UK yesterday were an outpouring of anger and revulsion against US President Donald Trump.

Organisers estimated a quarter of a million flooded into Trafalgar Square and surrounding streets. Police admit over 100,000. Tens of thousands also protested in major cities such as Manchester, Sheffield and Glasgow.

This was the first opportunity for workers in Europe to express their own views on the US president, after a week he spent threatening the European powers with trade war and demanding they speed up their own ongoing rearmament.

And whereas Europe’s rulers bemoaned their wounded pride at Trump’s pointed insults while seeking to maintain working relations, the UK protests prove that millions upon millions of workers despise Trump and everything he stands for—the enrichment of the billionaires, gutting of welfare provision, anti-immigrant and anti-Muslim racism and naked warmongering.

There is no doubt that Trump’s trip to Europe played its part in galvanising yesterday’s protests, including his xenophobic outburst in the Sun against immigrants and immigration destroying British and European culture.

Prime Minister Theresa May invited Trump to visit, despite more than a million people signing a petition in opposition. She hoped to secure his support for a US trade deal post-Brexit, promising the president at Blenheim Palace “an opportunity to tear down the bureaucratic barriers that frustrate business leaders on both sides of the Atlantic.”

Instead, in the pages of the Sun Trump treated her with naked scorn for daring to seek a continued relationship with the European Union, publicly savaging her just as he had German Chancellor Angela Merkel. All while his fascist attack dog, Steve Bannon, organised meetings with far-right figures at his Mayfair hotel …

But the nationwide protests gave only a very partial expression to the opposition that exists to Trump. He complained that he had been made to feel “unwelcome” in London. But had anyone called for strikes and boycotts of his visit, then Trump would have been sent packing.

No one made such a call—neither the trade unions, nor Labour Party leader Jeremy Corbyn.

Corbyn spoke at Trafalgar Square, gave press interviews and made a video castigating Trump for his abuses of immigrants and attacks on human rights. But he made sure to declare, “We are committed to dialogue, including of course with those we strongly disagree with and in government we would find a way to work with his administration while also standing up for our values.”

What does such a statement signify? That in office Labour would seek to work with Trump because he represents US imperialism. …

The character of the political establishment’s nominal opposition to Trump was spelt out in the Guardian’s editorial. Supporting the protests, it contrasted Trump’s trip with the very first visit by a US president to Europe, Woodrow Wilson, in the aftermath of World War I, “to make peace in war-ravaged Europe and to lead the construction of a liberal international order based on laws and rights.” But it did so without offering any explanation for Trump’s rise to the presidency and to insist that the European powers continue to represent a shining beacon for these same values.

“Mr Trump’s America can no longer be regarded with certainty as a reliable ally for European nations committed to the defence of liberal democracy”, it declared, while columnist Jonathan Freedland insisted that Britons “need to decide where we stand on what is emerging as the defining global divide.” With the EU or “with the world of Putin, Viktor Orbán and Trump… in which you either screw or get screwed…”

Dear Mr Freedland: Hungarian Viktor Orbán, the most racist head of government in Europe, stands ‘with the European Union’. His far-right party is a ‘respected’ member of the ‘Christian Democrat’ European People’s Party, the most influential political party in the European Union. During the Brexit referendum in Britain, Viktor Orbán paid for ‘open letter’ advertisements in the Daily Express and other British media, urging British voters to vote Yes to the European Union.

There is a political gulf between such apologists for the British and European imperialist powers and the great mass of working people and youth. They have been subject to savage austerity by Europe’s governments and have seen them eviscerate democratic freedoms and collectively preside over the treatment of refugees every bit as brutal as Trump, while boasting of their own rearmament programmes and turn to militarism.

The stench of fascism hovering over Trump and his Mafia-like shakedown of May and other European leaders is not an issue of an aberrant personality. Rather, his boorishness and brutality is the embodiment of all the violent characteristics of American imperialism in the period of its decline.

Whether led by Trump and the Republicans, or Hillary Clinton and the Democrats, the US will stop at nothing to preserve global political, economic and military domination. Indeed, Trump’s ascent to power confirm the prescience of Leon Trotsky’s insistence that “In the period of crisis the hegemony of the United States will operate more completely, more openly, and more ruthlessly than in the period of boom.”

One hundred years ago, in 1918, President Woodrow Wilson came to Europe, holding aloft his “Fourteen Points” presenting himself and America as the savior of “democracy, universal brotherhood and peace.” There was no small element of deceit and hypocrisy in the pretensions of Wilson, but the ascent of American imperialism endowed the president’s proclamations with a certain credibility. Wilson, a former university president, was even able to articulate the ambitions of US imperialism with considerable eloquence.

But a century later, the grotesque figure of Trump lumbers across Europe, threatening one and all with “offers that can’t be refused”. The differences in appearance, culture, demeanor and language reflect different stages in the historical trajectory of American imperialism. Wilson represented the ascent of the United States. Trump personifies its descent and putrefaction.

The same processes—the deepening economic crisis of world capitalism, the ferocious struggle to control the world’s markets and resources—also drives the European powers to respond in kind to the US challenge. Above all Trump, May, Merkel, Macron and the rest share the same basic hostility to the working class, who must be made to pay for the trade and military war through the destruction of their jobs and living standards.

A genuine movement against the societal promotion of inequality, nationalism, xenophobia, militarism and war that has become associated with the name Donald J. Trump demands the unification of the British, European, American and international working class against the imperialist world order and all its governments. It means the building of a new leadership to take forward the fight for a socialist alternative based on equality, internationalism and peace.

Facing up to Trump and his policies. Matt Willgress reports on an upcoming major Labour left festival of ideas which will look at how we can better campaign for a better world for the many. Thousands of people will protest today and over this week against Theresa May rolling out the red carpet for Donald Trump. Even though over 1.8 million people signed a petition against Trump being given a state visit to Britain only last year, the increasingly isolated Prime Minister has put on a visit for Trump which is a state visit in all but name, with a meeting with the Queen included in the itinerary: here.

Massive Protests in the UK Against Donald Trump’s Visit

Massive protests against US President Donald Trump visit to the UK have been organized in 25 cities across the country. Tens of thousands of people are taking part in the demonstrations. We were joined on the phone, live from the protest in London by Mohammed Ateek, from the Stop Trump Coalition.

Prime Minister May assures Trump over trade deal with US: here.

This 13 July 2018 video is called Meet the Activist Who Called Piers Morgan an “Idiot” for Criticizing Anti-Trump Protests in Britain.

Piers Morgan got owned on his own show. Cenk Uygur, Ana Kasparian, Brooke Thomas, and Ben Mankiewicz, hosts of The Young Turks, break it down.

“President Donald Trump said Friday that immigrants fleeing violence and seeking asylum in Europe are changing “the fabric of Europe. … And I don’t mean that in a positive way.” Trump’s xenophobic comments came during a shocking interview with the Rupert Murdoch-owned British tabloid The Sun. Massive protests have greeted President Trump during his two-day trip to Britain—including a 20-foot-long giant baby Trump blimp outside Parliament. We go to the streets of London to speak with Ash Sarkar, the anti-Trump coalition organizer who confronted Piers Morgan during a “Good Morning Britain” interview Thursday that went viral.”

Trump has desperately turned on his allies to try to force them to accept the full impact of the developing crisis of capitalism, so as to avoid a socialist revolution at home. The ‘bully’ is terrified of the US working class! He has a truly desperate policy for the truly desperate state of world capitalism: here. 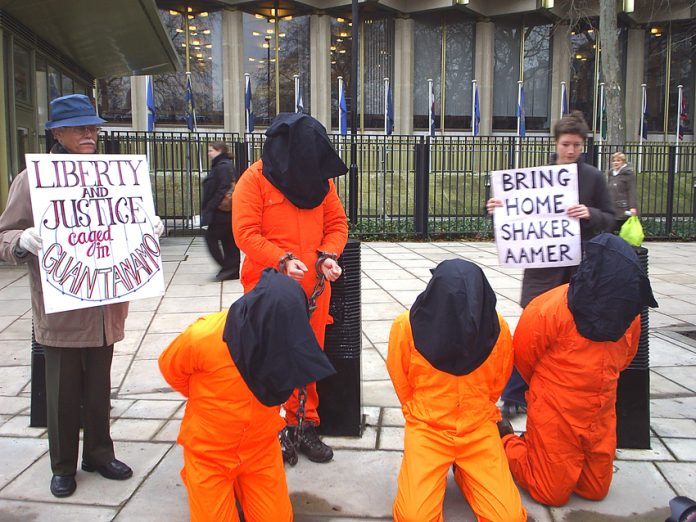 ON WEDNESDAY, July 11, lawyers representing eight long-term detainees at Guantánamo Bay argued in federal court that the US government cannot continue to detain the prisoners there forever, immune to judicial review. The mass habeas corpus motion, filed on the men’s behalf by Reprieve, the Center for Constitutional Rights (CCR) and other counsel, argues that their indefinite detention, based on President Donald Trump’s proclamation that he will not release anyone from Guantánamo, is arbitrary and unlawful: here.