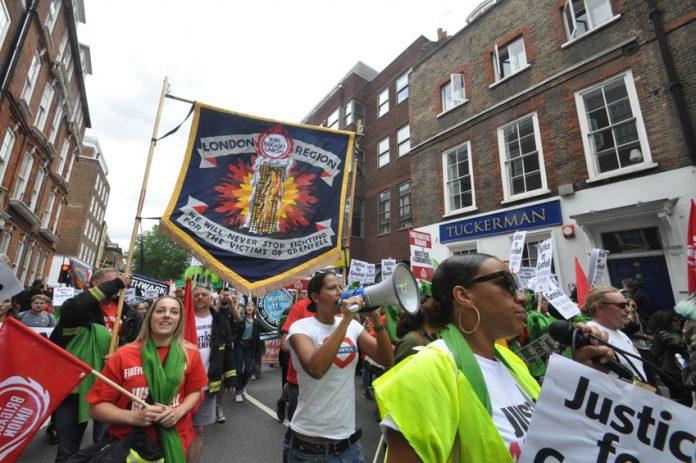 WRITING in the Independent, Matt Wrack, General Secretary of the Fire Brigades Union posed the question: ‘Firefighters are angry about Grenfell Tower too – so why are we being attacked?’

Wrack said: ‘I served as a frontline firefighter in the London Fire Brigade for more than two decades before being elected General Secretary of the Fire Brigades Union.

‘I’ve been in the fire and rescue industry for 35 years. As an operational firefighter in inner London, I responded to many serious traumatic incidents, some of which still live with me to this day. ‘But nothing I had to deal with came close to what firefighters faced one year ago as the 24-storey Grenfell Tower burned.

‘It was an unprecedented, catastrophic event that should never have been allowed to happen. ‘We have all read stories in the media recently about firefighters’ remarkable actions that night: how far up into the building they went to rescue people; how they wrote their names on their helmets for identification purposes if the unthinkable was to happen; how they entered the building with the growing fear it might collapse.

‘We will have also read some of the outrageous attacks on firefighters: Claims that the operation that night was “not very good” and how they let the rules get in the way of saving lives.

‘I could not disagree more. Firefighters went above and beyond the call of duty that night, saving many lives and doing whatever they could to do so.

‘Every decision taken will be scrutinised by the Grenfell Tower Inquiry but it worries me deeply that the focus is shifting the blame from the people at the top who created the conditions where a fire like this could happen.

‘Firefighters were not the reason why 72 innocent people were killed in Grenfell Tower.

‘Rather, it was a 40-year drive for deregulation driven by governments of both parties which created a fire safety system not fit for purpose and which allowed a building to be essentially wrapped in petrol.

‘The election of Thatcher in 1979 heralded a lurch towards deregulation, privatisation and attacks on fire and rescue services. ‘They did this even if it risked more deaths, injuries and property damage. Ministers part-privatised building control in local authorities. ‘This is the system where building plans are assessed for compliance with, among others, fire safety regulations.

‘The change allowed for a race to the bottom where private, uncertified inspectors could sign-off building plans.

‘This system prioritised the needs of business over the safety of buildings and people. The recent Hackitt review into building regulations acknowledges some of these failings. ‘The deregulation trend continued under the Blair government who in 2003 scrapped the Central Fire Brigades Advisory Council (CFBAC) which had overseen decades of improvement in fire safety measures and operational planning since its creation after the Second World War.

‘This has had a severe impact on the ability of the fire sector to address strategic issues.

‘Take, for example, the issue of cladding fires or the “stay put” policy. ‘No real forum today exists where these issues can be addressed. The problem would rest with individual fire services despite clearly being a national issue.’ ‘Since 2010, the process of deregulation has escalated. David Cameron’s “red tape challenge” to cut what he saw as unnecessary and burdensome regulations ran down the importance of public safety.

‘Ministers failed to improve building regulations and instead promoted voluntarism and self-regulation. ‘These developments over the decades created the environment where Grenfell Tower was allowed to burn. ‘We want to see prosecutions where appropriate. ‘That means the business owners and those who failed to keep their premises safe.

‘A year after the devastation, nobody has been arrested despite the obvious fact that Grenfell was a deathtrap. ‘But government ministers, past and present, must also be held to account for overseeing a deregulation agenda that failed to keep people safe in their homes – a basic expectation of public authorities in a civilised society.

‘Only by holding those in power to account, alongside a fundamental change in housing and fire safety, will we achieve justice for the 72 people who lost their lives at Grenfell Tower. ‘This will be a very difficult day for everyone who lost a loved one in the fire, everyone whose home was destroyed and lives upturned. ‘It will also be a difficult day for Grenfell firefighters too. Our focus from here onwards will be to achieve real justice for Grenfell.’

Meanwhile, at the Grenfell inquiry Bridgehead commander Brien O’Keefe explained how they were short of basic equipment like Breathing Apparatus (BA) and the radios did not work on the night of the fire. He told the inquiry: ‘The BA Crews were experiencing severe conditions and were hampered by the Limitations of Standard ‘Duration Breathing Apparatus (SDBA) in normal conditions, gives you twenty minutes working time, but in these conditions, it was greatly reduced.

‘Our BA crews were reporting that they were unable to reach the upper floors, before reaching their turn-around time.

‘So I transmitted to the Incident Commander that we needed, Extended Duration Breathing Apparatus (EDBA). ‘I also requested additional BA Control Boards and IEC packs to be brought to the Bridgehead by crews. ‘Our radio comms were poor, we lacked firefighting equipment and the crews were experiencing difficulty with water pressure. ‘Frankly speaking, one water main supplying more than two or three firefighting jets is not sufficient.

‘And we were faced with multiple jets and multiple vehicles trying to undertake multiple rescues in a high-rise. ‘There were many people now waiting to be committed and I made the decision to allow the BA crews to go past the Entry Control Point without going under air. ‘This is way outside Policy but we weren’t reaching and rescuing people because crews were running out of air. So I said to the BA crews to give me their tallies, to open their sets and that they should go under air when they got to a very smokey commission.

‘The crews were in agreement and they knew it was a huge risk to them. I spoke to one Team Leader Phil Wigley from Paddington and I told him to keep a close eye on his crew and made him promise, actually promise me, to look after them. ‘He promised me he’d do his best. I didn’t take this decision lightly and it was a very hard decision for me to make.

‘I made the decision to commit crews without starting up under air immediately, to pre-arm the BA saturation and so facilitate rescues of FSG persons trapped within the upper floors of the building.

‘I believe this tactic did help crews undertake numerous rescues although it added increased danger to the BA crews themselves.

‘I also detailed the BA crews to commit without firefighting media and breaking-in kit because we didn’t have enough of it. ‘I told them to use whatever equipment they could find already in use or available as they went up the floors. There was a lot of discarded equipment at this stage.

‘Crews began reporting that it was zero visibility and extremely hot and that they were unable to determine floor, or flat numbers. Light smoke was now apparent in the vicinity of our Bridgehead.

‘A Station Manager then arrived at the Bridgehead and said to me that he was taking over and asked who was in charge. ‘I didn’t know who he was at the time, but I now know him as SM Andy Walton. ‘I briefed him that I was in charge and we then had a robust discussion. He stayed there only a very short time. ‘Then he left and we didn’t see him again.

‘I continued with my team as before. At some point Group Manager Richard Welch arrived at Bridgehead and stated that he was taking over. ‘I briefed him and discussed the current situation with him. ‘I told him that SDBA crews were unable to reach persons on the upper floors and said that this was a job where EDBA was required.

‘Richard Welch asked me how much EDBA was required and I said, “All of it.’ And he said that wasn’t possible but I said that we needed all of the EDBA in London; we had to have it. He said, “Really?’ and I replied “Everything”. ‘He said “Ok, I’ll get EDBA.” He’s a good officer, Richard Welch. I’ve never worked with him before but he seemed like a very practical man and I communicated quite well with him. He let me carry on doing what I was doing.’

The fire that broke out at the Whitstable House tower block, North Kensington, London on July 3 caused great anxiety to its residents and the local community, which includes survivors of the Grenfell Tower fire: here.