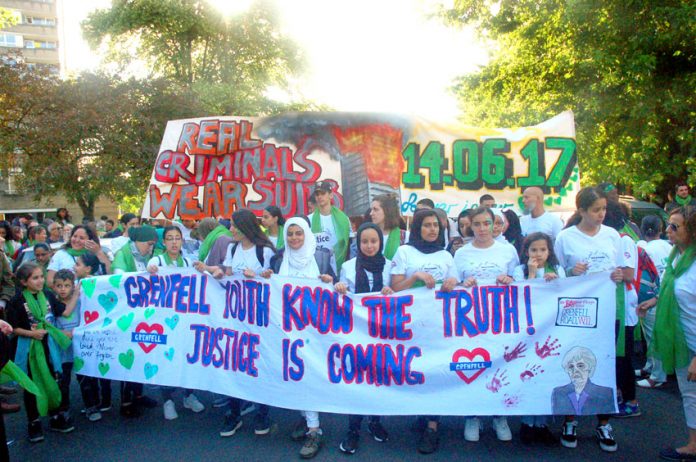 15,000 workers and youth took part in an emotional silent march through west London on Thursday evening to mark the first anniversary of the Grenfell Tower inferno that claimed 72 lives and injured many others.

The march was headed by young people with the banner Grenfell Youth Know the Truth! – Justice is Coming’ and there were large numbers of youth on the march. As well as Justice4Grenfell and Grenfell United banners, there were ones from Barnet Unison, Camden Unison and University College Hospital Unison, and Barnet Teachers Association.

There was an Islington Labour Party banner and Labour leader Jeremy Corbyn and shadow home secretary Dianne Abbot joined the march. Wearing green sashes, they signed the Memorial Wall with the phrase, ‘We are all together’. London Mayor Sadiq Khan also joined the march.

One dramatic banner with an image of the flaming tower read ‘Real Criminals wear suits – 14-6-2017’.

As well as placards demanding Justice for Grenfell, there were home-made placards shaped as hearts and one with the slogan ‘Theresa May free bungee jump, no strings attached’.

The silent march passed a firefighters guard of honour at Ladbroke Grove and many stopped to shake hands with firefighters lining the road, and giving them big hugs.

News Line spoke to several of the participants as they gathered by the memorial wall before the march. Unison member Rodney Johnson, a support worker from Greenford, said: ‘I came to pay my respects to the dead and honour those who are grieving and are affected by it. ‘Also it’s my birthday today, so rather then spending the day celebrating me, I’d rather be spending the day celebrating those who come out to remember Grenfell.

‘It’s sad that it has happened. Somebody ought to be blamed but I don’t know the full facts of everything to say who it should be. ‘The way the community has come together, it shows whatever our backgrounds, we are human. ‘We all have the same desire to survive and live safely, be free.’

Personal trainer J.P. Smith, 24, said: ‘I grew up on Latimer Road. ‘A lot of my close friends and family lost relatives in the Grenfell Tower. ‘We’re all here pulling together to support one another. The government is not doing enough to support us. ‘That is why we are here fighting to make sure something is done.

‘The trade unions should be doing a lot more. They should be checking on the families. I agree they should call a general strike to bring this government down. ‘We need people in government that are going to do things for ordinary people.’

Safia Bendibaj from Camden, a customer service manager for a skin care company, said: ‘I’m here to support everyone that has been affected. ‘I lost a friend, Yasim El-Wahabi, and his family in Grenfell. So I’m here to honour his memory today. It was a tragedy that has affected the community as a whole.

‘It’s appalling that nobody has taken responsibility and that the victims have still not been rehoused – that is disgusting. ‘It reflects the lack of compassion this borough has for its residents. ‘The unions should take action to get this government out. Before that we need to hold the people responsible to account.

‘They should respect basic human rights and rehouse the victims. ‘Also, they have only just covered up the burnt-out tower because they knew there would be press coverage one year on. ‘The community has had to sit there and look at the burnt tower for a whole year, that is disgusting.’

Anne Elliot from Latimer Road was with her family: ‘We’re here to fight for justice. We lost a friend.’

Rigerta Ahmetaf from Meaningful Education said: ‘We’ve been providing mental health and emotional support for the victims for the past year. ‘I just feel it’s awful that a year on people are still not housed. ‘There needs to be more support and faster action to debrief the disruption and trauma caused to individuals.’

Former campaign coordination for Justice4Grenfell Sue Caro told News Line: ‘I see Grenfell as being emblematic of everything that’s wrong with the country and what the Tories have done.

‘The unions should take action, any decent human being should take action.’ Emma Bradley said: ‘I’m local and have come on the silent march to support the families and bereaved. ‘Someone has to be accountable for the work that was done that made it a death trap.

‘Hopefully, we’ll be able to move forward with lessons to be learned from this tragedy so it never happens again. ‘It should never have happened in the first place. The trade unions should take action to bring the Tories down. We want a government that people can trust. ‘The corporates have the power, the people need better representation from central government.’

Laura, a young mum from Latimer Road, said: ‘This should never have happened in the first place. It’s cost so many people’s lives; it’s devastating. I’m here for the people who lost their lives and to remember them. ‘People are angry because so many who lived in the tower are still in bed and breakfasts. ‘For the past year, I’ve seen the community do more than anybody else.’

Clare Finburgh, UCU member and lecturer at Goldsmith’s College, said: ‘I’m here to remember who lost their lives and a community who has been bereft. ‘There’s anger and shock at the injustice that is obviously perpetrated against the poorest and most vulnerable people in society. ‘Grenfell Tower is a product of lowering taxes to high earners and cutting spending on public services. You can see the criminality of that policy. I consider what happened to be social murder.’

School youth Shaqs Harrak, 15, added: ‘I’m here to pay my respects. I had close friends, family and friends who lived in the tower. They passed away. ‘I’m very upset and completely blame the government. The trade unions should strike and bring the government down. The workers and the community should run the country, not the rich.’

‘It means a lot to firefighters to be on the march today and getting the support from the local community. ‘It means a lot that we’re here to support them. It’s a very emotional day – it should be, after what’s happened.’