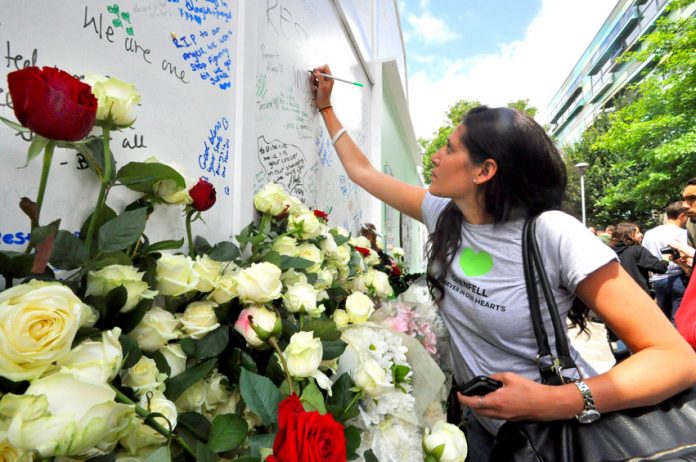 ‘WE WANT the nation to keep Grenfell in their consciousness, member of the Justice4Grenfell campaign group Yvette Williams said on the anniversary of the tragic fire which claimed the lives of so many men, women and children.

Masses of people gathered at the base of Grenfell Tower yesterday morning to unveil a mosaic, and next to the mosaic was a board on which people wrote tributes to all of those who had died. Why are we allowed to build high-rise buildings with a single staircase? It is sheer madness. It is not allowed anywhere else in the world except for Great Britain’, Arnold Tarling, Fire Safety Expert said on the first anniversary of the Grenfell Fire.

He continued: ‘The stay-put policy in that property, had there not been the changes made to it, replacement of the cladding, replacement of the fire doors with plastic fire doors, the stay-put policy would have worked. The firefighters had never been in a situation like this before. They are not responsible. If they had advocated evacuation, the stair cases were full of highly toxic gas, because the air extract was not working.

‘You have one person tripping on that staircase, everybody else goes on top, you would still have huge numbers of people dying, they might have got a few more now. In the past, the stay-put policy had worked, but because of the changes that we got in materials and design and alterations, the stay put should be reviewed and removed. We should have two means of escape for every building. There are lots of people who are trying to play down the problems that we have in construction. And it is not just social housing, it is around the building industry.’

It emerged yesterday that out of the 159 tower blocks with the same flammable cladding as Grenfell Tower, to date only ten had been re-clad, meaning that thousands of families are still living in fire traps.