Almost 25 years after its introduction in the French army, the Leclerc has known its first combat experience after peaceful UN experience in Lebanon and NATO experience in Kosovo or more recently in Poland. Ironically, this was neither under French flag nor in the European continent against Cold War’s Soviet armoured divisions that the Leclerc saw action but … in Yemen in the name of the UAE military.

PARIS – Two rights groups campaigning for the French government to halt weapons sales to Saudi Arabia and the United Arab Emirates said on Sunday they were taking their case to France’s highest legal authority.

President Emmanuel Macron has come under pressure from rights groups to scale back ties with a Saudi-led coalition that has intervened in Yemen’s civil war, where more than 10,000 people have been killed since 2015.

Droit Solidarité, a legal NGO, and Aser, which specializes in armament issues, demanded in March that export licenses to Saudi Arabia and the UAE be withdrawn. They gave Prime Minister Edouard Philippe a two-month ultimatum.

They have had no response, so the groups said they would present a legal challenge on Monday to the Conseil d’Etat, France’s highest legal authority, which advises the government on legislative matters and arbitrates on public policy issues.

“It will be up to (Council of State) to decide on the legality of the export license authorizations issued by the prime minister”, ASER et Droit Solidarité said in a statement.

The two argue that France is violating national and international law by selling arms that are being used in the conflict in Yemen. The United Nations and rights groups accuse the coalition of targeting civilians, which amounts to a war crime …

The French government was not immediately available for comment.

Saudi Arabia and the UAE are major purchasers of French arms, and the country’s top defense firms, such as Dassault (AVMD.PA) and Thales (TCFP.PA) have big contracts in the Gulf. …

Since the war began, at least three million people have been displaced and Yemen has been plunged into a humanitarian disaster.

Unlike many if its allies, in France – the world’s third-biggest arms exporter – export licensing procedures have no parliamentary checks or balances, and are approved through a committee headed by the prime minister.

Some European states, including Germany, have curtailed links with the Saudi-led military coalition, though France, Britain and the United States have not followed suit. 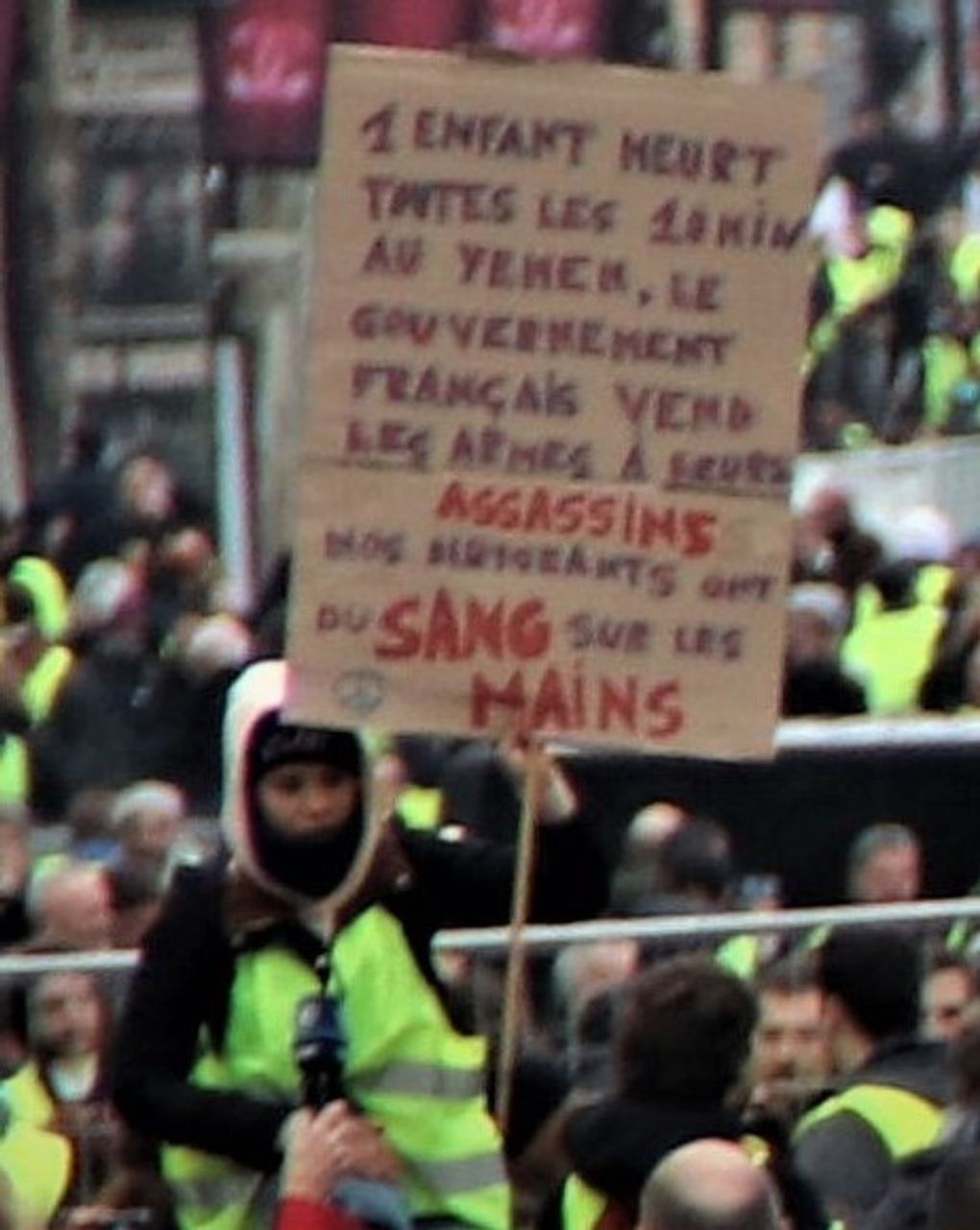 This sign in Paris reads, ‘A child dies every 10 minutes in Yemen. The French government is selling arms to their killers. Our leaders have blood on their hands.’