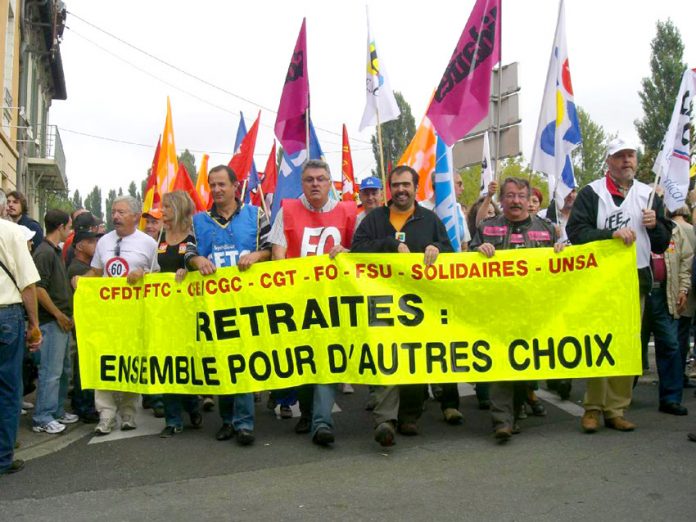 FOLLOWING national strikes on October 10, 2017 and March 22, 2018, this coming May 22 will be the third day of general strike in France’s Public Service against the Macron government’s mass sackings, pensions cuts and privatisation. It has been called by nine major trade union [federation]s: CGT, CFDT, CFTC, CGC, FA-FP, FO, FSU, SOLIDAIRES and UNSA.

Expressing its solidarity, the CGT said: ‘The question of public services, their development, their effectiveness to meet the needs, their accessibility to populations throughout the territory is one of the issues raised in the period. ‘This goes hand in hand with the improvement of working conditions and the recognition of those who exercise and implement them.

‘This is also the meaning of the current mobilisations of employees of SNCF, electricians and gas, postal workers, EHPAD staff and more broadly health, regardless of the nature of the establishment. ‘Rightly, and we associate with it, trade unions do not share the objectives pursued by the government to reduce the scope of public action with the prospect of abandonment, or even privatisation, of public missions and, in the key aim, a massive plan of 120,000 job cuts.

‘In view of the stakes involved, the public can only invest in actions to strengthen and deploy a quality public service that meets its needs and the general interest. ‘On May 22, it is a question of Public Service employees winning, in particular, the holding of wage negotiations; stopping job cuts and the creation of posts in the many services that need them to meet the demands of the population and guarantee their rights, a new plan to eliminate job insecurity and the tenure of contract workers; demanding provisions to enforce professional equality and full respect for social democracy and the representative bodies of the workforce.

‘The CGT gives its full support to the struggle of the incumbent and precarious staff of the Public Service and calls for the success of the action day of May 22.’ In a statement on pension reform, the CGT said: ‘After the first meetings with the High Commissioner for Pension Reform (HCRR), the CGT remains very suspicious and particularly vigilant about a project whose objectives are not displayed, particularly that of the level of pensions that would emerge. ‘We already observe that to legitimise the approach, the criticism of the current system does not shine by its objectivity.

‘Thus, the “annuity” mechanism in force in all basic schemes is condemned on the grounds that certain rules no longer correspond to the objectives set. The beautiful discovery! ‘By degrading the parameters throughout, the reforms that have been added since 1993, the system has become difficult to read and is producing declining pensions. But was not that the purpose of these reforms?

‘However, despite these degradations, our system of pension by annuities and distribution, thanks to the principle of solidarity which founds it, has lifted the retirees out of poverty in less than 30 years: there were 28% living below the poverty threshold (defined as 50% of the median wage) in 1970 – there were only 4.7% in 1997. ‘Today, the proportions of active and retired people living below the poverty line remain about the same.

‘The UNHCR, based on the work of the NRC (Pension Orientation Council), also makes this observation: our system effectively retains a significant share of solidarity. ‘For the CGT, this is indeed essential because it still allows today to reduce the inequalities related to work. One can then ask the question: but why venture into a systemic reform that will disrupt all benchmarks for both workers and retirees? Moreover, while the accounts are roughly in balance.

‘In the transition phase of its reform, Sweden has lost several years of pensions put in reserve.

‘Why not answer clearly the real and known difficulties: the level of pensions in the future and the replacement rate that the younger generations can hope for; low pensions; gender equality; a real consideration of hardness; maintaining the purchasing power of pensions; a reform of employment-related funding.

‘So many topics put forward by the CGT for several years and reaffirmed during the meeting with Mr Delevoye, High Commissioner for pension reform.

‘To bend the benchmarks and to focus the debate on administrative meccano, points or notional accounts, is it innocent? Would there not be other goals, other intentions? We have to wonder. ‘Under the guise of simplification, is not there in fact the will to put in place a system producing a further decline of future pensions, in an automated way, under conditions illegible for the common employees?

‘The CGT asks the questions that all employees ask: a reform for what amount of pension, after how long and at what age? Issues that are carefully discarded in this reform project. ‘These are questions that the CGT will constantly highlight and on which it calls the greatest vigilance of all employees.’

The union also warned of plans to axe jobs by Electricity giant Endenis.

The CGT said: ‘The National Federation Mines Energy CGT (FNME CGT) has been alerting for several months on the consequences of the new orientations of Enedis: 2,500 jobs will be eliminated by 2021, (against 2,000 by 2020 announced last January), the vast majority in technical services. ‘These sackings will result in the closure of hundreds of local sites. ‘This situation led the Central Works Council to launch a right of economic and social alert at its meeting of April 18, 2018. A first since the creation of the distribution subsidiary in 2008!

‘Rather than seeking a compromise, the leaders of Enedis seek to clear their responsibilities by appointing scapegoats: the regulator, the government, new technologies. For example, the President of Enedis says that Linky would be responsible for the social breakdown announced and ultimately a degradation of service to users!

The CGT union statement continued: ‘The FNME CGT cannot accept that the Linky project is today the pretext for a social break and the questioning of the public service, in total contradiction with the commitments made by Enedis of a “neutral” effect on employment at the launch of the project. ‘For FNME CGT, it is urgent to exercise greater control over the means granted to it and to reinforce its public service obligations.

‘It is today a necessity to guarantee the exemplariness of a formidable tool in the service of the general interest. The 2010/2016 period demonstrated that this was possible in the context of an ambitious industrial project.’

2 thoughts on “French general strike against Macron, 22 May”