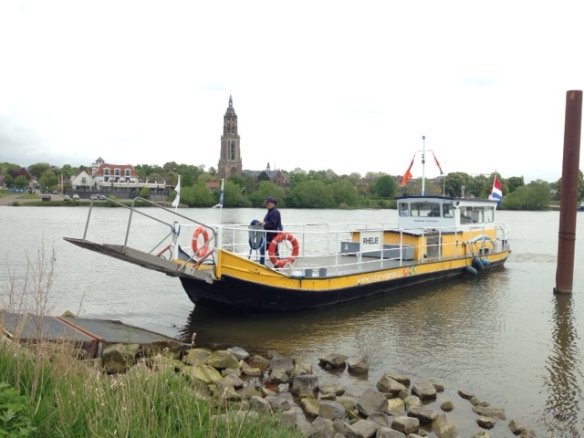 After 27 April 2018 to the Palmerswaard nature reserve, again there on 28 April; by this ferry across the Rhine. Like other photos in this blog post, this is a cellphone photo. In the background of the photo is the 82 meter high tower of the Cunera church in Rhenen. It is a 15th century late Gothic church. The name of the church refers to Saint Cunera; who, however, appears to be no more than a legend.

At a restaurant close to the ferry landing in Rhenen were these bottlebrush flowers; originally from Australia.

As we enter the Palmerswaard, a lesser black-backed gull flying. A spoonbill flying.

A mute swan and a tufted duck couple swimming.

This photo from the northern, Palmerswaard, bank of the river Rhine shows a lake, behind it a dike, behind the dike the (invisible) Rhine, and behind the Rhine (visible) the southern bank.

As we continue, two whitethroats.

There are smaller and bigger lakes all over the Palmerswaard.

On a branch, we see a cuckoo sitting and calling.

A meadow pipit on a pole.