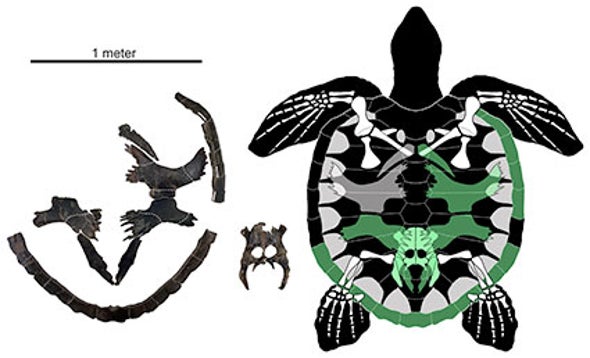 A sea turtle discovered in Alabama is a new species from the Late Cretaceous epoch, according to a study published April 18, 2018 in the open-access journal PLOS ONE by Drew Gentry from the University of Alabama at Birmingham, Alabama, USA, and colleagues.

Modern day sea turtles were previously thought to have had a single ancestor of the Peritresius clade during the Late Cretaceous epoch, from about 100 to 66 million years ago. This ancestral species, Peritresius ornatus, lived exclusively in North America, but few Peritresius fossils from this epoch had been found in what is now the southeastern U.S., an area known for producing large numbers of Late Cretaceous marine turtle fossils. In this study, the research team analyzed sea turtle fossils collected from marine sediments in Alabama and Mississippi, dating from about 83 to 66 million years ago.

The researchers identified some of the Alabama fossils as representing a new Peritresius species, which they named Peritresius martini after Mr. George Martin who discovered the fossils. Their identification was based on anatomical features including the shape of the turtle’s shell. Comparing P. martini and P. ornatus, the researchers noted that the shell of P. ornatus is unusual amongst Cretaceous sea turtles in having sculptured skin elements which are well-supplied with blood vessels. This unique feature may suggest that P. ornatus was capable of thermoregulation, which could have enabled Peritresius to keep warm and survive during the cooling period of the Cretaceous, unlike many other marine turtles that went extinct.

These findings extend the known evolutionary history for the Peritresius clade to include two anatomically distinct species from the Late Cretaceous epoch, and also reveal that Peritresius was distributed across a wider region than previously thought.

Drew Gentry says: “This discovery not only answers several important questions about the distribution and diversity of sea turtles during this period but also provides further evidence that Alabama is one of the best places in the world to study some of the earliest ancestors of modern sea turtles.”