Diving in Bali is a document of an extraordinary expedition I made to Indonesia’s magical island of Bali in 2006 with Aquamarine Diving.

From Tulamben’s awesome USAT Liberty wreck, to the reef manta rays of Nusa Penida, via the fascinating macro marine life of Tulamben and Seraya Secrets, the footage covers the breadth of Bali’s fascinating underwater world.

The video features 158 species of marine life, and their common and scientific names are available by turning on the captions with the CC button under the video.

Viewers can now contribute subtitles for the marine life names in this video in many languages. Find out more here.

From Tulamben there is footage of the wreck of the USAT Liberty in both day time and night time, including the humphead parrotfish that spend the night there. Also from Tulamben are numerous marine live encounters from dives at the Drop-Off and the Coral Garden.

Just around the corner we make a dive at Seraya Secrets, a macro hotspot where I encountered seahorses and nudibranchs. From Padangbai on the east coast of Bali we have footage from The Blue Lagoon and Pura Jepun. From the island of Nusa Penida we have the manta ray cleaning station, Manta Point, and Ped.

From the National University of Singapore:

Over a dozen new species of crabs, prawns and lobsters discovered; over 40 new records for Indonesia

Despite a stormy start thanks to Cyclone Marcus, scientists who participated in the South Java Deep Sea Biodiversity Expedition 2018 (SJADES 2018) had collected more than 12,000 creatures during their 14-day voyage to survey the unexplored deep seas off the southern coast of West Java, Indonesia.

Some 800 species from over 200 families of sponges, jellyfish, molluscs, starfish, urchins, worms, crabs, prawns and fish were uncovered during the expedition. Over a dozen new species of hermit crabs, prawns, lobsters and crabs were discovered, and over 40 species of various kinds are new records for Indonesia.

Among the deep-sea creatures new to science is a crab that has fuzzy spines and blood-red eyes; a lobster with long arms and zebra-patterned shell; and a hermit crab with green eyes and orange banded pincers. …

63 stations sampled within a fortnight

The research team departed Muara Baru, Jakarta in Indonesia on 23 March 2018 on board Indonesian research vessel Baruna Jaya VIII. They sailed anti-clockwise towards Cilacap in southern Java and back, covering a total distance of 2,200 kilometres.

“14 days of shared challenges at sea has enabled us to forge strong ties with our Indonesian collaborators, and such links are important to the long-term scientific ties between our two countries,” said Prof Ng, chief scientist for the Singapore team. “On the research front, our teams have learnt a lot about how to conduct deep-sea science, handle the various equipment needed for such work, and had the opportunity to sample and examine a multitude of fantastic deep sea animals. We expect to identify more new species among the pickings of the expedition, and we certainly look forward to studying the specimens and data with our Indonesian friends.”

Prof Rahayu, chief scientist for the Indonesia team, said, “The Indonesian scientists benefitted both personally and professionally through this expedition, which was partly a capacity-building exercise for our young scientists. Through interacting with international scientists, they were exposed to new scientific techniques and methodologies in an environment that presents a different set of challenges from their own scientific specialities. Hopefully, such knowledge transfer and collaboration would build stronger and more resilient ties among between our two nations.”

The South Java Deep-Sea Biodiversity Expedition 2018 is the first concerted deep-sea biological exploration conducted by Singapore and Indonesia, to study deep-sea marine life in the largely unexplored part of the waters off the southern coast of West Java.

The samples collected will be studied by scientists from both countries. This is anticipated to take up to two years, and the results will be shared and discussed with the world at a special workshop that will be held in Indonesia in 2020. The outputs will then be collated and published in the museum’s science-citation journal, The Raffles Bulletin of Zoology. 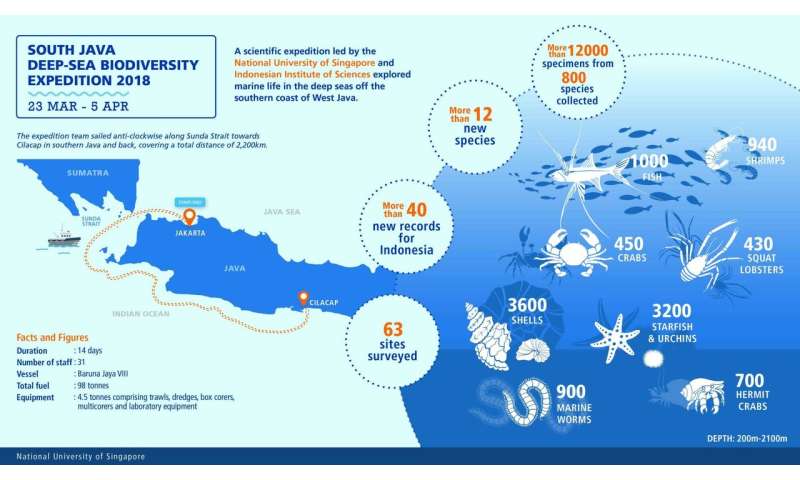