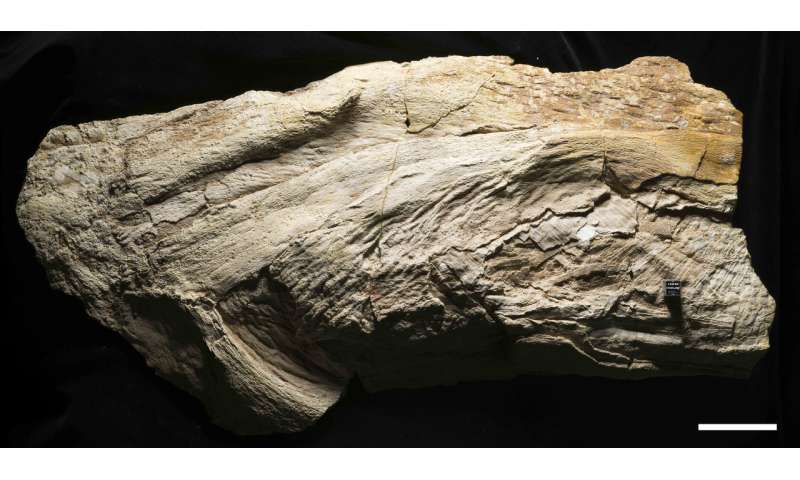 First an alga, then a squid, enigmatic fossil is actually a fish

Maybe misidentified a third time: as a Angiospermopsida seed plant

has been reinterpreted as the preserved remains of a large cartilaginous fish, the group that includes sharks and rays. In a study published in the Journal of Paleontology, American Museum of Natural History researchers describe the fishy characteristics of the animal, which lived between 70-85 million years ago.

“There are many examples of temporarily misplaced taxa in paleontological history, including ferns that were once thought to be sponges and lungfish teeth thought to be fungi“, said the lead author, Allison Bronson, a comparative biology Ph.D.-degree student in the Museum’s Richard Gilder Graduate School. “In this case, the misidentification didn’t happen because of a lack of technology at the time — scientists familiar with cartilage structure could easily see this was a chondrichthyan fish. The researchers used reasonable arguments for their interpretations, but didn’t look outside of their own fields.”

The enigmatic specimen, Platylithophycus cretaceum, is roughly 1.5-feet long by 10-inches wide and from the Niobrara Formation in Kansas. The Niobrara Formation is one of the most diverse fish-fossil sites in North America, preserving late Cretaceous animals that lived in and around the Western Interior Seaway, a broad expanse of water that split North America into two land masses.

In 1948, two paleobotanists from the Colorado School of Mines and Princeton University compared the texture of the fossil slab with that of green algae. They described two parts of a plant: surfaces covered with hexagonal plates, which they called “fronds”, and supposedly calcium carbonate-covered thread-like filaments. In 1968, two researchers from Fort Hays Kansas State College studying cephalopods from the Niobrara Formation compared the specimen with a cuttlefish, based primarily on its textural similarities to a cuttlebone — the unique internal shell of cuttlefish. The reclassification made Platylithophycus the oldest sepiid squid then on record.

In both of these earlier studies, the hard tissue was assumed to be composed of calcium carbonate, but no tests were performed. For the new study, Bronson and co-author John Maisey, a curator in the Museum’s Division of Paleontology, applied a small amount of dilute organic acid to the specimen — a method that has been widely used in paleontology since the time of the initial description of Platylithophycus. If there is a reaction, the fossilized material is likely made from calcium carbonate. But if there is no reaction, which was the case when Bronson and Maisey performed the test, it is likely made from calcium phosphate, as are the fossilized skeletons of cartilaginous fish like sharks and rays.

The most obvious clue that Platylithophycus was a cartilaginous fish are the hexagonal plates on the surface of the specimen. After taking a closer look with a scanning electron microscope, Bronson and Maisey reinterpreted that feature as tessellated calcified cartilage, found on both extinct and living sharks and rays. The new study suggests that the “filaments” earlier described are actually part of the gill arches, made up of tessellated cartilage. Gill arches are cartilaginous curved bars along the pharynx, or throat, that support the gills of fish. The “fronds” are reinterpreted as gill rakers, finger-like projections that extend from the gill arches and help with feeding.

“We think this was a rather large cartilaginous fish, possibly related to living filter-feeding rays such as Manta and Mobula“, Maisey said. “This potentially expands the range of diversity in the Niobrara fauna.”

But because this fossil only preserves the animal’s gills and no additional identifying features like teeth, it cannot be given a new name or reunited with an existing species. So until then, this fish will still carry the name of a plant.