After my earlier Lady Amherst’s pheasants’ dance floor blog post, we were still there on 1 April 2018, as this photo of the adult male pheasant shows. 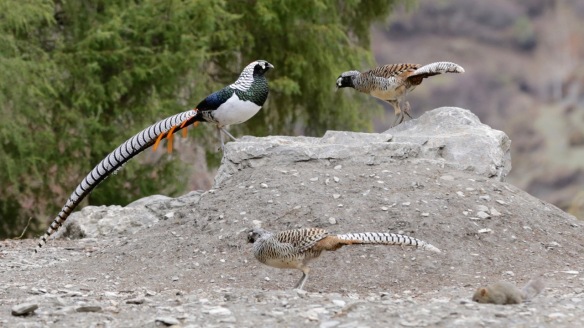 There were not just the adult male and the females. Two immature males as well, shown on this photo. Also, a red-hipped squirrel.

On this photo, a red-hipped squirrel and an Elliott’s laughing thrush join a female pheasant.

An Elliott’s laughing thrush was also joined by a group of bigger songbirds, Chinese babaxes.

Quite a big flock of Chinese babaxes. They look a bit like spotted nutcrackers, but are not closely related to them.

On a branch, a white-collared yuhina. On another branch, this black-browed tit.

This is the end of my blogging on 1 April. There will be plenty about 2 April in China on this blog; so, stay tuned!

8 thoughts on “Lady Amherst’s pheasants, other birds, squirrels in China”