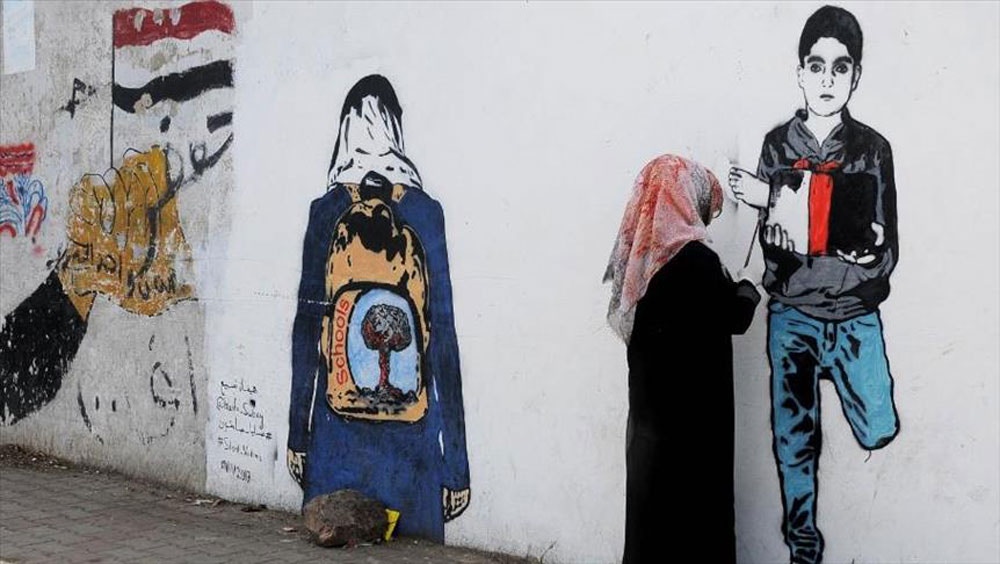 Three Years Into the Yemen War, a Collective of Women Street Artists Cope With the Destruction

For 27-year-old artist Haifa Subay, the third anniversary of full-scale war in Yemen — marked this week — brings both shock and resignation. “I can’t believe the war continues”, said Subay, who is based in Sana’a. “When the fighting first began, I never imagined it would last for years, or even months. Every day I thought, ‘Surely this will be the last day of fighting, surely it has to end soon.’” Instead, the war proceeded, with years of civil unrest giving way to a multilateral conflict that has left Yemenis in the grips of the world’s worst humanitarian crisis.

After the first Saudi-led airstrike darkened the Sana’a sky on March 26, 2015, the eclipse of war was swift. “The bombings were endless”, recounted Subay. “We felt constant fear: It wore away our hope and our sense of life.” Yemen has been subject to over 16,000 airstrikes since 2015, an average of one air raid every 94 minutes for three years, with civilians like Subay suffering frequent consequences. “At one point, I had to take sleeping pills”, said Subay, speaking over the phone, “because I was so hysterical from the bombing.”

Subay’s condition worsened after she lost her job at an import-export company in 2016, joining the majority of young Yemenis now unemployed in the country’s war-ravaged economy. Trapped at home in an unraveling city, Subay’s anxiety worsened. “I never imagined life could be this way. I was afraid every minute,” she said. “It was a very dark time.” Subay sought solace in her lifelong passion for art, losing herself in private notebooks that she filled with oils and acrylics, but the hours with her sketchbooks did little to soothe her worry. Outside her door, violence continued, food and fuel shortages worsened, and thousands fell victim to preventable disease. Perhaps worst of all, though, was the lack of hope.

“We felt forgotten as people,” she said. “The war just went on, and when we looked at the news, or the world leaders, they were only concerned with the politics, with the military strategies. No one was talking about our suffering, about the human beings of Yemen.”

After months of growing frustration, Subay decided to do something to combat this silence. “I realized the politicians and the media were not going to see us, so I had to make them see”, she told me. She would take her message to the public the best way she knew how — with her art. On August 17 last year, armed with her personal arsenal of brushes and paint, Subay took to the hot streets of Sana’a. By the end of the day, sweaty and exhausted, she stood back to see her handiwork: a mural depicting a cluster of women and children huddling around a dark corner. The piece, which she titled “Behind the Destruction”, would be the first in her ongoing #SilentVictims campaign, a series of murals highlighting the human cost of Yemen’s continuing war.

Subay’s pieces range widely, addressing the gruesome effects of shelling and landmines, but also paying tribute to the less tangible tragedies of war. Apart from the thousands of civilian lives lost — rough estimates suggest numbers between 5,000 and 11,000 civilians have been killed directly by military strikes, while around twice as many have been injured  — the war between rebels and a Saudi Arabian-led coalition of Persian Gulf states has wrought havoc on virtually every aspect of Yemeni life. Over 1 million Yemenis have been afflicted by diseases such as cholera and diphtheria, a crisis compounded by the collapse of more than half the country’s health care system. Inflation, blockades, and rampant unemployment have reduced the Yemeni economy by nearly half, while imports of crucial food and fuel supplies remain at a near-standstill, contributing to widespread shortages. An estimated 8.4 million Yemenis hover on the brink of famine. All told, the U.N. estimates that 22 million of the country’s 25 million citizens are in need of humanitarian aid.

“There is no normal life for anyone,” said Subay, “people live in fear and hopelessness”.

Even so, Subay’s work has offered her a sense of self-assertion and pride, however slight, and has inspired other women to join her in the campaign. Today, one of Subay’s most loyal teammates is 27-year-old Sabreen Al Mahjali. Al Mahjali accompanied Subay for her first mural — not as a painter, but as a guardian. “I was worried for her”, Al Mahjali recalled over video chat. “I thought maybe men would give her trouble for being on the street. And some men did bother us, but it wasn’t too much.” Watching Subay work, Al Mahjali was captivated: “I’m not a painter or an artist, but I wanted to take part in this message. I am a Yemeni and a woman, and I wanted to leave my mark.” Al Mahjali’s latest piece depicts a clenched fist inside the universal symbol for “woman.”

Subay’s group is comprised totally of women, with the team focusing their work exclusively on the experiences of Yemeni women and children. “This was a choice from the beginning,” Subay said, “because these are the most overlooked people in the war. And they suffer terribly.” Children make up some of the war’s most vulnerable victims, with 11 million now in need of humanitarian aid, 2 million suffering from acute malnutrition, nearly half a million on the brink of starvation, and an average of 130 children under the age of 5 dying every day. And women-led households are on the rise as more men are killed or disappeared in the violence, leaving Yemeni women both burdened by economic concerns and at risk for gender-based violence. According to a recent estimate from the relief agency CARE, over 1 million pregnant and lactating Yemeni women are malnourished, while an additional 75,000 pregnant women are at risk of potentially lethal complications due to the country’s ravaged health care system.

These themes were highlighted in the group’s latest mural series, painted on March 8 to commemorate International Women’s Day. Subay’s piece depicted a woman covering her eyes and mouth, symbolizing the untold and unrecognized suffering of Yemen’s female population.

The notion behind the murals resonated with Raghad Mubarak, a 27-year-old mother of one who joined Subay that day. “In Yemen right now, women are enduring more than ever before”, she said. “They are losing men to the fighting, they are dealing with poverty, they are waiting in long lines just to get fuel or water, they are comforting their children. Many believe we are weak, but the world should know that Yemeni women are strong, maybe the strongest women in the world.” Mubarak’s own painting from that day shows a female figure, lips smiling faintly, cradling planet Earth.