There are many pro-peace songs. Like one written by Pete Seeger, sung by Marlene Dietrich. Here is a music video, from Britain, by The Equals – Black Skinned Blue-Eyed Boys. Written by Eddy Grant, from Guyana.

Together we’ll be
When the war is over.
You see the Black Skin Blue Eyed Boys

They ain’t gonna fight no wars
Oh no.

Cool is school
But the teachers beat yer

When they see
That they can’t reach yer.

You see the Black Skin Blue Eyed Boys
They ain’t gonna fight no wars
Oh no.

They ain’t got no country…
It’s a brand new day
With brand new people
In one big world
We’re just one people.
You see the Black Skin Blue Eyed Boys

They ain’t gonna fight no wars. Oh
no.
Baby
you know that we hate fighting.

Recent research about people in Europe, more especially Spain, in the Mesolithic age, ten thousands of years after their ancestors had immigrated from Africa, shows they had blue eyes but ‘the dark skins of Africans’. 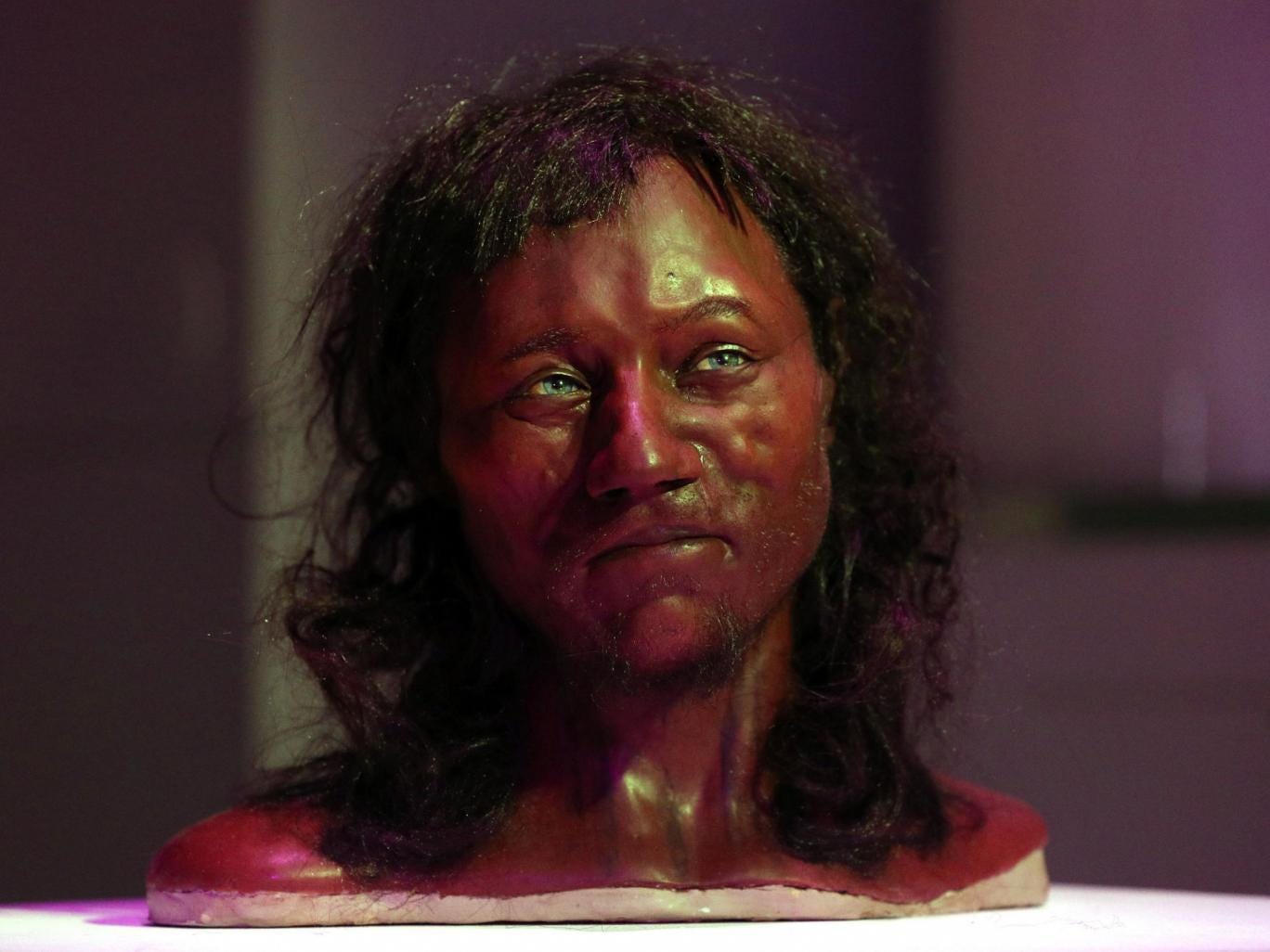 The first modern Briton had “dark to black” skin, groundbreaking new analysis of his 10,000-year-old remains has revealed.

Britain’s oldest complete skeleton, known as Cheddar Man, was unearthed more than a century ago in Gough’s Cave in Somerset.

But an unprecedented examination of his DNA, along with a facial reconstruction of the fossil, shows the young man would have had a darker complexion than previously thought, along with blue eyes and dark, curly hair.

Research by evolution and DNA specialists at the Natural History Museum and University College London suggests the pigmentation associated with northern European ancestry is a more recent development.

The research and remodelling process was documented for Channel 4 programme The First Brit: Secrets of the 10,000 Year Old Man.

Professor Ian Barnes, research leader at the Natural History Museum, said at a screening of the documentary: “For me, it’s not just the skin colour that’s interesting, it’s that combination of features that make him look not like anyone that you’d see today.

“Not just dark skin and blue eyes, because you can get that combination, but also the face shape. So all of this combines together and make him just not the same as people you see around today.”

They scanned the skull and a 3D model was produced by “paleo artists” Alfons and Adrie Kennis, who make life-like reconstructions of extinct mammals and early humans.

The twins, who have created reconstructions for museums around the world and usually create models of Neanderthals, spent three months working on Cheddar Man.

“It’s really nice to make a more graceful man, not a heavy-browed Neanderthal,” said Alfons. “So we were very excited that it was a guy from after the Ice Age. We were very interested in what kind of human he was.

“With the new DNA information it was really revolutionary. And it allowed us to look more at race, this revealed stuff that we’d never had known before.”

Cheddar Man, thought to have died in his twenties and have had a relatively good diet, lived in Britain when it was almost completely depopulated about 300 generations ago.

Although previous populations had settled in Britain long before his arrival, they were wiped out before him and he marked the start of continuous habitation on the island.

Genetically, he belonged to a group of people known as the “Western Hunter-Gatherers”, Mesolithic-era individuals from Spain, Hungary and Luxembourg.

His ancestors migrated to Europe from the Middle East after the Ice Age. Britain has been inhabited ever since and today about 10 per cent of White British people are descended from the group.

Alfons said: “People define themselves by which country they’re from, and they assume that their ancestors were just like them. And then suddenly new research shows that we used to be a totally different people with a different genetic makeup.

“People will be surprised, and maybe it will make immigrants feel a bit more involved in the story. And maybe it gets rid of the idea that you have to look a certain way to be from somewhere. We are all immigrants.”

From daily The Guardian in Britain today on this:

“It really shows up that these imaginary racial categories that we have are really very modern constructions, or very recent constructions, that really are not applicable to the past at all.”