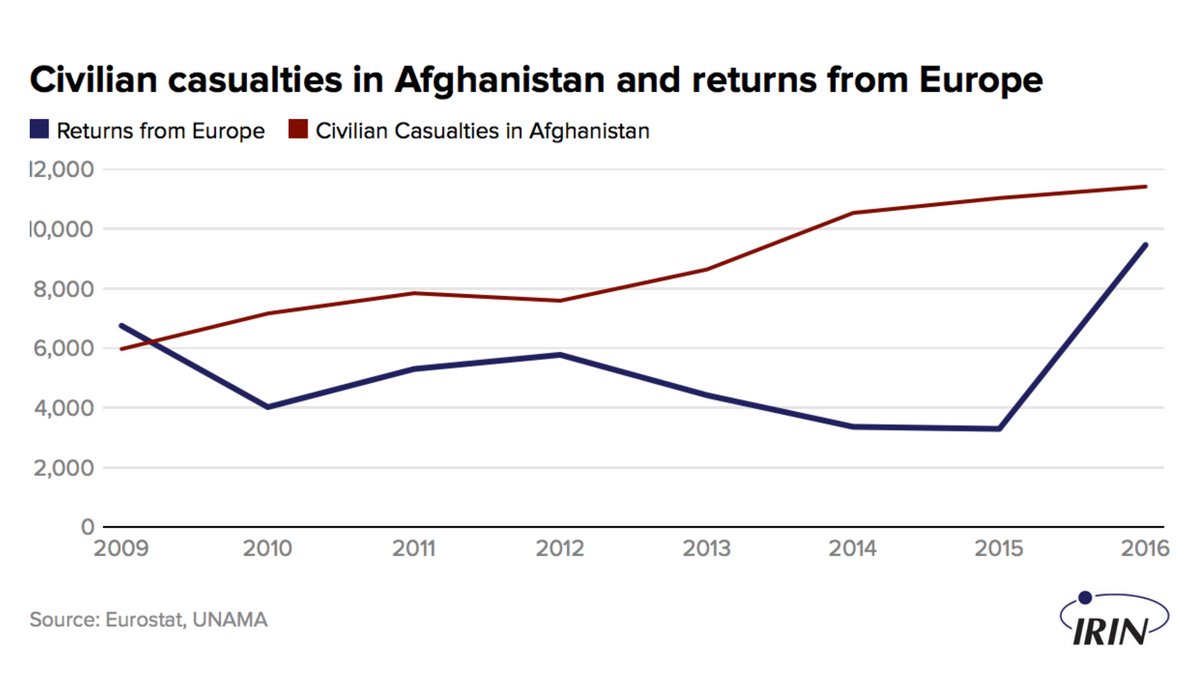 Europe sends Afghans back to danger

In a cafe in Kabul, Mohammad Elham’s eyes dart back and forth between a steaming cup of tea and the front entrance: the months since his return to Afghanistan have been spent in a state of constant fear.

Elham left Afghanistan on a cold night in 2010, he says, after the Taliban killed his wife and two children. Last year, he returned to the country he fled — this time, in handcuffs, one of a surging number of Afghan deportees ousted from Europe.

“It was hurtful and humiliating”, Elham said of his journey from Germany, where his asylum application was rejected, to Afghanistan, where he says his presence may again jeopardise his family’s safety.

As European countries tighten borders and asylum policies, the number of Afghan asylum seekers pushed out of Europe has soared. But returnees like Elham are being forced back to a volatile country, where conflict has uprooted more than one million people over the last two years and civilian casualties are at near-record levels.

With war, a stagnant economy, and chronic instability continuing to drive people out in droves, refugee advocates warn that Afghanistan faces a revolving cycle of migration that will see more Afghans continue to flee even while others are forced back.

Even European countries seen as relatively sympathetic to refugees are now turning their backs on Afghan asylum seekers.

Germany, Sweden and Finland all saw asylum recognition rates for Afghans plummet in 2017. Germany granted asylum to less than half of Afghan applicants during the first nine months of 2017, according to the European Council on Refugees and Exiles; it had accepted almost three quarters of asylum claims in 2015.

At the same time, civilian casualties in Afghanistan have climbed, part of a deepening instability that has seen the resurgent Taliban, a growing so-called Islamic State [ISIS]-aligned militancy, and other armed groups wrestle with the internationally backed government for control of the country. More than 8,000 civilians were killed or injured in conflict through the first nine months of last year, according to the UN mission in Afghanistan.

The bloody conflict has stretched across Afghanistan: from Kabul, where dozens were killed in an attack on a Shia Muslim cultural centre in late December, to provinces like eastern Nangarhar, where a bomb blast at a funeral reportedly killed at least 15 on the eve of 2018.

The scale of the bloodshed hasn’t stopped the rise in European deportations, says Abdul Ghafoor, director of Afghanistan Migrants Advice and Support Organisation, which works with deported asylum seekers in Kabul.

“Why they would decide to send someone back into the danger is beyond understanding,” Ghafoor told IRIN.

A controversial agreement between the European Union and the Afghan government paved the way for the near-unlimited deportation of rejected Afghan asylum seekers.

Negotiated in 2016, the agreement allows for the EU to put failed asylum seekers, including “non-voluntary returnees”, on flights back to Afghanistan. Rights groups claimed heavily aid-dependent Afghanistan was pressured to sign off on the deal — an arrangement one called “a new low” for the EU.

“No part of the country can be considered safe,” Amnesty International said in an October report, which called on European governments to suspend deportations of Afghan asylum seekers.

European governments have seen the carnage firsthand: in May, a massive truck bomb struck near the German embassy in the heart of Kabul, killing more than 150 civilians.

An international Organization for Migration (IOM) programme helps people who have returned to Afghanistan voluntarily — although rights groups point out that many returnees are faced with little choice. This aid includes linking returnees to family networks, transportation to home provinces and short-term shelter in Kabul. But returning is hard.

“A lot of individuals invest a lot in going to Europe and if it’s a family, the cost is so high that it is likely they have sold and invested everything they have into making that journey,” said Masood Ahmadi, a programme manager with the IOM in Kabul. “Coming back to nothing can be a very difficult thing.”

Meanwhile, there are bigger mass returns of Afghans from neighbouring countries: more than half a million Afghans returned from Pakistan and Iran last year, according to UN agencies.

Combined with the frequent displacement of people already living in the country, Afghanistan finds itself trying to reintegrate massive numbers in the middle of a war.

“Returns have… come to dominate Afghan migration patterns at one of the most insecure and unstable times in its recent history,” the Migration Policy Institute stated in a November report.

But even as deportations and returns surge, many Afghans are still looking for the exits.

Data from the European Union shows that more than 38,000 Afghan citizens made new asylum claims in EU countries in the first 11 months of 2017. And in a recent survey of Afghan returnees from Europe by REACH, which researches humanitarian issues, most respondents said they planned on making another attempt at returning to Europe — as soon as they find the money.

“[European countries] pool in all these resources to send Afghans back”, said Ghafoor. “But in my experience, many of these Afghans leave again, because there is nothing but threats and insecurity for them here.”

Elham, howver, says he’s tired of running from one country to the next.

But there’s little for him in Kabul, where he leads a discreet existence — Elham is not his real name. Few people know he is in Afghanistan, yet he says the Taliban have gotten wind of his return. His family in the provinces recently received a threatening letter.

US suspends security aid to Pakistan as part of Afghan War push: here.