Clashes broke out between protesters and police in Paris on Saturday, following a demonstration against illegal slave auctions of migrants in Libya.

Migrants being sold as ‘slaves’ in Libya, IOM reports.

Slavery in Libya was abolished in 1857; before, eg, the United States of America, or the Dutch colonial empire abolished it. However, NATO’s 2011 ‘humanitarian’ war on Libya brought it back.

By Kumaran Ira in France:

The re-emergence of slavery in Libya exposes the reactionary character of the imperialist war waged by the NATO alliance against the country and across North Africa and the Middle East.

In Paris Saturday more than 1,000 people gathered in front of the Libyan embassy, after a CNN documentary showing the auctioning of refugees as slaves inside the North African country circulated on social media.

Smugglers in Libya are auctioning migrants off as slaves. At a property outside Tripoli, CNN’s Nima Elbagir witnessed a dozen men go under the hammer in the space of minutes.

The CNN report showing the sale of migrants has shocked and angered masses of people around the world. It shows two young men for sale. The proceedings are filmed secretly on a cell phone camera. A voice-over explains, “A man addresses the crowd: ‘A strong man for farm work’, he says. ‘400 [dinars]! 700? 700! 800? The prices rise!’” The voice-over adds, “The men are sold for 1,200 Libyan dinars, that is US$400 each. This is an auction of human beings.”

Several organizations, including the Collective Against Slavery and Concentration Camps in Libya (CECCL), created after the CNN report spread over social media, organized the Saturday demonstration. Protesters carried signs saying “No to slavery in Libya” and reportedly burned the national flag.

French security forces violently attacked the protest. CRS riot police fired tear gas at the demonstrators. In videos shared on social media, one can see tense stand-offs with shouting and charges by protesters and police units. According to police sources, two people were arrested.

The police prefecture issued a statement denouncing the supposedly illegal and undeclared character of the protest, while admitting that “no damage had been caused” during the event. Nevertheless, the prefecture demanded that the organizers of the protest be identified, so “that legal proceedings can be started in order to prepare appropriate charges.”

The emergence of slavery in post-war Libya and the police-state repression of protests against slavery in France expose the advanced state of collapse of democratic forms in Europe. French imperialism and its supporters in the petty-bourgeois “left” have their hands drenched in blood.

Contemporary slavery in Libya is the product of the barbaric war waged by the United States, France and other NATO powers in 2011 to topple Colonel Muammar Gaddafi’s regime. Amid revolutionary uprisings of the working class against dictatorships in Tunisia and Egypt, NATO launched a violent military intervention in North Africa. Petty-bourgeois charlatans like the New Anti-capitalist Party (NPA) and Bernard-Henri Lévy demanded a “humanitarian” war against Libya, supposedly to prevent Gaddafi from repressing protests in Benghazi.

The now infamous Professor Gilbert Achcar wrote much of the NPA’s pro-war propaganda on Libya. He reassured his readers that the different members of the “heterogeneous” coalition of NATO allies in Libya, “a mixture of human rights militants, intellectuals, tribal currents and Islamist forces”, were “united by their rejection of dictatorship, desire for democracy and respect for human rights.”

Achcar insisted that people in Europe had a moral duty to support war and attacked all left-wing criticism of the imperialist character of the NATO intervention. “If Gaddafi were allowed to pursue his military offensive and re-take Benghazi, there would be an enormous massacre. We are in a situation where a population is truly in danger and there is no other alternative to protect it. The assault from Gaddafi’s forces is coming in a matter of hours or days. One cannot, in the name of anti-imperialist principles, oppose an action that will prevent the massacre of civilians.”

All these shameless justifications for an imperialist war that killed tens of thousands of people and devastated an entire country were political lies. In fact, the Libyan war is a classic example of the role of imperialism. In the wake of a conflict waged supposedly to defend democracy, the freedom to protest and the Rights of Man, slavery has been reintroduced in Libya and non-state-sanctioned protests have been banned in France.

This vindicates what the World Socialist Web Site wrote on the war in 2011: “Far from a ‘revolution’ or struggle for ‘liberation,’ what the world is witnessing is the rape of Libya by a syndicate of imperialist powers determined to lay hold of its oil wealth and turn its territory into a neo-colonial base of operations for further interventions throughout the Middle East and North Africa.”

The war left behind a catastrophic situation for refugees. Hundreds of thousands of them now pass through Libya, which is mired in a six-year civil war between rival Islamist and tribal militias. Detained in various networks of concentration camps by the Libyan regime, by armed militias or criminal gangs, they are subject to extortion, torture, sexual assault, sometimes execution or sale in modern slave markets set up in parking lots in the capital city of Tripoli.

The European Union (EU) has reacted by doing everything it can to try to prevent the refugees from leaving and reaching Europe. The Macron government, which has established a permanent state of emergency that attacks basic democratic rights, works closely with the forces persecuting refugees on the ground inside Libya. It has proposed building triage centers in Libyan detention camps where French officials would work with their Libyan counterparts to admit a minority of refugees to Europe and prevent most of them from escaping North Africa.

This underscores the fact that the struggle against slavery and for the defense of refugees requires a political mobilization of the working class against the EU and NATO. Opposition to imperialist war, the source of the crimes against humanity now being reported in Libya, based on mobilizing the working class internationally on a struggle for socialism, is the perspective advanced by the International Committee of the Fourth International (ICFI) and the WSWS. 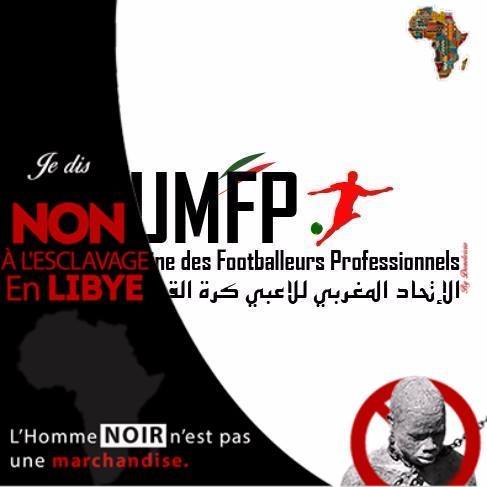 This is a picture by the Moroccan Association of Professional Football Players against slavery in Libya.

World leaders may have been quick to voice outrage over video footage of Libyan slave auctions, but activists raised the alarm months ago — and their warnings fell on deaf ears: here.