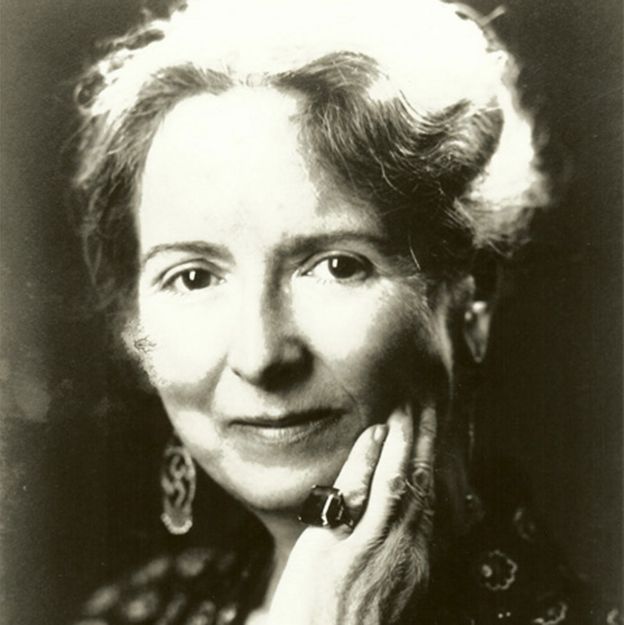 Savitri Devi: The mystical fascist being resurrected by the alt-right

Savitri Devi, a mystical admirer of Hitler and a cat-loving devotee of the Aryan myth, seems destined to fade into obscurity after her death 25 [sic; 35] years ago. But thanks to the rise of the extreme right, her name and her image now crop up online more and more, writes Maria Margaronis.

In 2012, browsing the website of Greece’s Golden Dawn party for an article I was writing, I stumbled on a picture of a woman in a blue silk sari gazing at a bust of Hitler against a blazing sunset sky.

What was this apparently Hindu woman doing on the site of an openly racist party devoted to expelling all foreigners from Greece? I filed her as a curiosity at the back of my mind, until the rising tide of extreme-right politics in Europe and America threw up the name “Savitri Devi” once again.

It isn’t hard these days to find discussions of Savitri Devi’s books on neo-Nazi web forums, especially The Lightning and the Sun, which expounds the theory that Hitler was an avatar – an incarnation – of the Hindu god Vishnu, and Gold in the Furnace, which urges true believers to trust that National Socialism will rise again. The American extreme-right website Counter-Currents hosts an extensive online archive of her life and work.

Her views are reaching a wider public audience, too, thanks to American alt-right leaders such as Richard Spencer and Steve Bannon, former Trump chief strategist and chair of Breitbart News, who have taken up her account of history as a cyclical battle between good and evil — a theory she shared with other 20th century mystical fascists.

Dark metal bands and American right-wing radio stations also roar about the Kali Yuga, the Dark Age of Hindu mythology, which Savitri Devi believed that Hitler was once destined to bring to an end.

Who was Savitri Devi, and why are her ideas being resurrected now? Despite the sari and the name she was a European, born Maximiani Portas to an English mother and Greek-Italian father in Lyon in 1905.

From an early age, she despised all forms of egalitarianism. “A beautiful girl is not equal to an ugly girl,” she told an interviewer sent by the Holocaust denier Ernst Zundel in 1978.

Swept up by Greek nationalism, she arrived in Athens in 1923 at the same time as thousands of refugees displaced after Greece’s disastrous military campaign in Asia Minor at the end of World War One.

She blamed the Western allies for Greece’s humiliation, and for what she saw as the unjustly punitive terms imposed on Germany by the Treaty of Versailles. In Savitri’s mind, Greece and Germany were both victims, denied the legitimate aspiration of uniting all their people in one territory. That view, combined with a passionate anti-Semitism which she claimed she learned from the Bible, led her to identify herself early on as a National Socialist.

Hitler was Germany’s champion but, she said, his desire to eradicate Europe’s Jews and restore the “Aryan race” to its rightful position of power made him her “Fuhrer” too.

In common with anti-Semitic thinkers since the 18th century, Savitri blamed Judeo-Christianity for destroying the glory that was Greece and the Aryans’ mythical ancient utopia. In the early 1930s she sailed for India in search of a living version of Europe’s pagan past, convinced that the caste system, by forbidding intermarriage, had preserved pure Aryans there. (Former Ku Klux Klan leader David Duke, who visited India in the 1970s, shared her misconception).

Ms Portas (‘Savitri Devi’) shared her view that high caste Hindus supposedly belonged to the ‘Aryan race’, while lower caste Hindus supposedly belonged to ‘inferior’ races, with the Theosophical Society, founded by Helena Petrovna Blavatsky (1831-1891). Savitri Devi wrote for the Society’s monthly, The Theosophist, in the 1940s. Ms Blavatsky did not speak Indian languages and did not really understand the complexities of Hinduism, projecting her own ideas into it. So did Savitri Devi.

So unusual was the sight of a European woman travelling fourth class by train that she was placed under surveillance by the British colonial authorities. But Savitri had little to do with the British in India until World War Two, when she passed information she gleaned from them to the Japanese. She learned Indian languages, married a Brahmin (whom she believed to be an Aryan like herself), and forged an elaborate synthesis of Nazism and Hindu myth, in which Hitler was a “man against time” destined to bring about the end of the Kali Yuga and usher in a new golden age of Aryan supremacy.

In Kolkata in the 1930s, Savitri worked for the Hindu Mission, now a quiet neighbourhood shrine but in those days a centre for Hindu nationalist campaigning and missionary activity. The politicisation of India’s religious communities under the British had helped to foster the growth of the Hindutva movement, which argued that the Hindus were the true heirs of the Aryans and that India was an essentially Hindu nation.

Savitri offered her services to the Mission’s director, Swami Satyananda, who (like many Indians before independence) shared her admiration for Hitler and allowed her to mix Nazi propaganda with her talks on Hindu identity. She travelled the country lecturing in Hindi and Bengali, salting her talks about Aryan values with quotations from Mein Kampf.

In 1945, devastated by the fall of the Third Reich, she returned to Europe to work for its restoration. Her arrival in England is described in her book Long-Whiskers and the Two-Legged Goddess, a children’s fable whose heroine is a cat-loving Nazi like herself.

The heroine, Heliodora, “had no ‘human feelings’ in the ordinary sense of the word,” she wrote. “She had been, from her very childhood, much too profoundly shocked at the behaviour of man towards animals… to have any sympathy for people suffering on account of their being Jews.” …

In 1948, Savitri managed to enter occupied Germany, where she distributed thousands of pro-Nazi leaflets, bearing the words: “One day we shall rise and triumph again! Hope and wait! Heil Hitler!”

She said years later that she was glad to be arrested by the British occupation authorities because it brought her closer to her jailed Nazi “comrades”. During her imprisonment, which was cut short by her husband’s intervention through the Indian government, she grew close to a former Belsen wardress condemned as a war criminal, “a beautiful-looking woman, a blonde of about my age.” …

She died at a friend’s house in England in 1982. Her ashes were laid to rest with full fascist honours, purportedly next to those of American Nazi leader George Lincoln Rockwell.

Savitri Devi herself is almost forgotten in India now, but the Hindu nationalism she espoused and helped to promote is in the ascendant, much to the concern of her nephew, the veteran left-wing journalist Sumanta Banerjee.

“In her book A Warning to the Hindus, which came out in 1939, she advised the Hindus to cultivate a ‘spirit of organised resistance throughout Hindudom,'” he says. “The targets of this resistance were the Muslims, who were a threat, according to her, to the Hindus. And this is the same fear that is being echoed today.”

Hindutva is the official ideology of Prime Minster Narendra Modi’s ruling Bharatiya Janata Party, which claims that Muslims and secularists have undermined the strength of the Hindu nation. Though the party’s official spokesmen condemn violence, the riots that led to the tearing down of the Babri Mosque at Ayodhya in 1992 and the current waves of attacks – sometimes fatal – by vigilante groups on Muslims and dissenters tell a different story.

In the US, racism, anti-communism and Christian fundamentalist notions about the impending apocalypse have together prepared the ground for the far right‘s flirtation with occult Nazism and Hindu prophecies.

And as in India, the traditional ruling majority’s fear of losing power has been an effective recruiting tool.

“Since the middle of the Obama administration the single most important factor in the minds of people who joined the Tea Party was the idea that white people were being shoved aside,” says researcher and writer Chip Berlet. “The far right and organised white supremacist groups have both been buoyed up by fear among many white citizens in the United States that they’re being displaced and humiliated.”

Savitri Devi’s work forms part of the history of both India’s Hindu nationalists and the European and American extreme right. Her flamboyant, eccentric writings contain – unvarnished and uncensored – all their key ideas: that human beings can be divided into “races” which should be kept separate; that certain groups are superior to and more entitled than others; that these groups are under threat; and that the dark times in which we live will only end when they again take power, returning us to a mythical golden age.

Woman alleges attack by white nationalists after Nashville rally. The woman, who is white, says a group of ‘White Lives Matter’ marchers harassed her and her black boyfriend, one of them striking her in the face: here.

16 thoughts on “Neo-nazi ideology, from Savitri Devi to Steve Bannon”