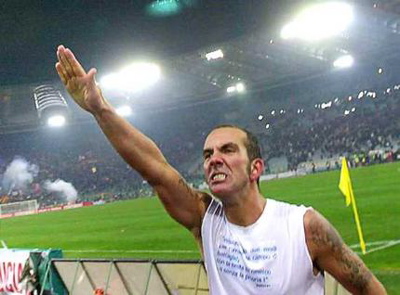 The GMB said today that it has decided to end its sponsorship of Swindon Town football club in protest at the appointment of Paolo Di Canio as manager.

GMB said the Italian former player who was named as the new manager of Swindon Town on Friday had previously voiced right-wing views of which it strongly disapproved. …

Mr Di Canio has spoken freely about being a fascist and an admirer of Mussolini. He has faced bans and fines for making the fascist straight-arm salute while playing for Italian club Lazio.

Fans of the Italian football club Lazio Roma have left anti-Semitic slogans and stickers depicting Anne Frank in their stadium. The statements were aimed at supporters of city-mate and arch rivals AS Roma, with whom they share the Olympic Stadium of Rome.

The Lazio fans included stickers depicting Anne Frank in an AS Roma shirt and wrote in graffiti ‘Roma fans are Jews’. …

The stickers and slogans were put there during last Sunday’s match, in the part of the stadium where AS Roma’s fanatical supporters always sit at their home matches.

Lazio’s fans never come there. Last weekend they were sitting there because their “part” of the stadium was closed because of racist shouting aimed at some non-white opponent players during a match a few weeks ago.

Lazio Roma’s fanatical supporters are notorious because of their fascist and extreme right-wing sympathies. This season, the UEFA football league already ordered the club to play a European contest without spectators as a punishment for racist sceaming during a European game of a few seasons ago.

ROME — Images of Anne Frank wearing a Roma jersey were among the anti-Semitic stickers and graffiti left by Lazio fans that were discovered at the Stadio Olimpico on Monday.

It was the latest in a long line of racist or anti-Semitic incidents involving Lazio supporters.

The northern curva (end) of the stadium where Lazio’s “ultra” fans sit was closed on Sunday for the match with Cagliari due to racist chanting during a match against Sassuolo this month.

As a result, Lazio decided to open the southern end and let the ultras in where Roma’s hard-core fans sit for their home matches.

The Italian football federation is likely to open an investigation, which could result in a full stadium ban for Lazio. …

Lazio’s ultras have long been known for their far right-wing political stances and fascist leanings. During a 1998 derby, Lazio ultras held up a banner directed at their Roma counterparts that read, “Auschwitz Is Your Country; the Ovens Are Your Homes.”

“This is not a curva, this is not football, this is not sport. Keep the anti-Semites out of the stadiums,” tweeted Ruth Dureghello, the president of Rome’s Jewish community. …

Also this season, Lazio beat Belgian side Zulte Waregem 2-0 in a Europa League match behind closed doors due to punishment from UEFA for racist chants aimed at a Sparta Prague player in the Roman side’s last continental appearance two seasons ago.