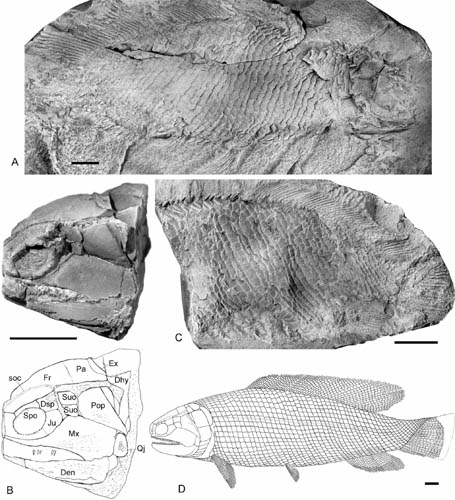 When it comes to some oddball fish, looks can be deceiving.

Polypterus, today found only in Africa, and its close kin have generally been considered some of the most primitive ray-finned fishes alive, thanks in part to skeletal features that resemble those on some ancient fish. Now a new analysis of fish fossils of an early polypterid relative called Fukangichthys [from the Triassic] unearthed in China suggests that those features aren’t so old. The finding shakes up the evolutionary tree of ray-finned fishes, making the group as a whole about 20 million to 40 million years younger than thought, researchers propose online August 30 in Nature.

Ray-finned fishes named for the spines, or rays, that support their fins — are the largest group of vertebrates, making up about half of all backboned animals. They include 30,000 living species, such as gars, bowfins and salmon. The group was thought to originate about 385 million years ago, in the Devonian Period. But the new research, using 3-D CT scans of the previously discovered fossils, shifts the fishes’ apparent origin to the start of the Carboniferous Period some 360 million years ago, says study coauthor Matt Friedman, a paleontologist at the University of Michigan in Ann Arbor.

One of the largest extinction events in Earth’s history marks the boundary between the Devonian and Carboniferous. “We know that many groups of backboned animals were hard hit by the event,” Friedman says. But after the massive die-off, ray-finned fishes popped up and, according to previous fossil evidence, their diversity exploded. The new finding “brings the origin of the modern ray-finned fish group in line with this conspicuous pattern that we see in the fossil record,” Friedman says. It suggests these vertebrates didn’t survive the event. They came after, then flourished.