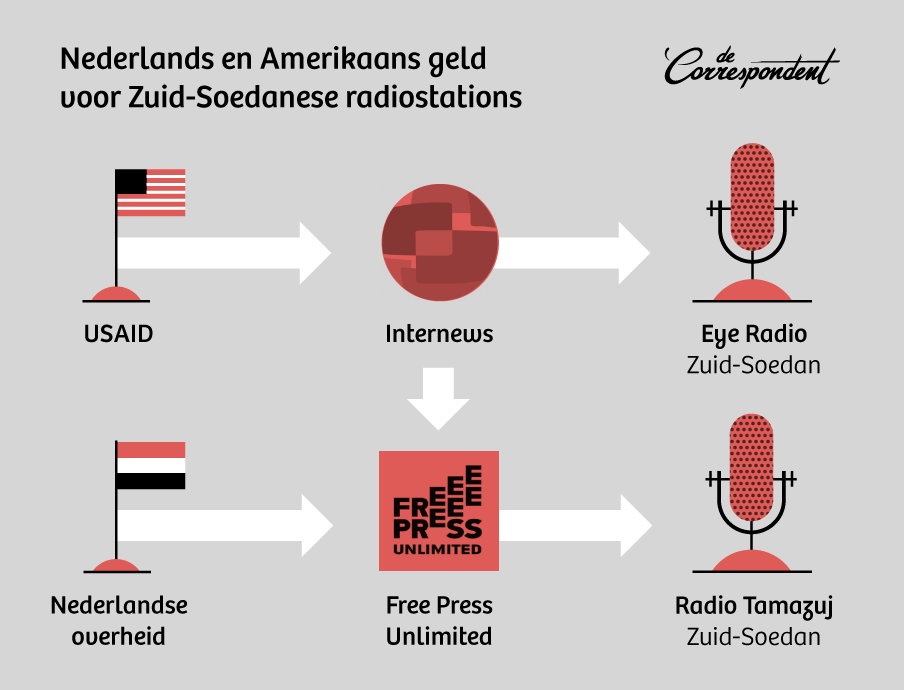 This picture shows the financing of supposedly independent media in South Sudan. On the left, the governments of the USA and the Netherlands. In the middle, the non(?)-governmental organisations Internews and Free Press Unlimited. On the right, the South Sudanese radio stations Eye Radio and Radio Tamazuj.

This week, there is a report by Maite Vermeulen on Dutch Internet site De Correspondent.

It’s early in the morning, December 2, 2016. Somewhere in East Africa, the editors of Radio Tamazuj start up their computers. One of the journalists types automatically his password to complete the first news reports on the website. ‘Sorry, unrecognized username or password. Have you forgotten your password?’

He tries again, letter after letter. No, the password is not recognized.

“I can not log in …” he hears a colleague next to him.

No-one on Radio Tamazuj’s editorial board can log in on the morning of December 2, 2016. Because the Dutch aid organisation Free Press Unlimited, which founded and used to support Radio Tamazuj, has changed their passwords.

There is bloody war in South Sudan between several militias. There are foreign soldiers, from the USA, Japan and elsewhere, attracted by South Sudanese oil. Civilians are massacred. Human rights are violated.

And then the Free Press Unlimited bosses in the Netherlands clamped down on Radio Tamazuj, because they said Radio Tamazuj endangered their getting United States government money by way of Internews.