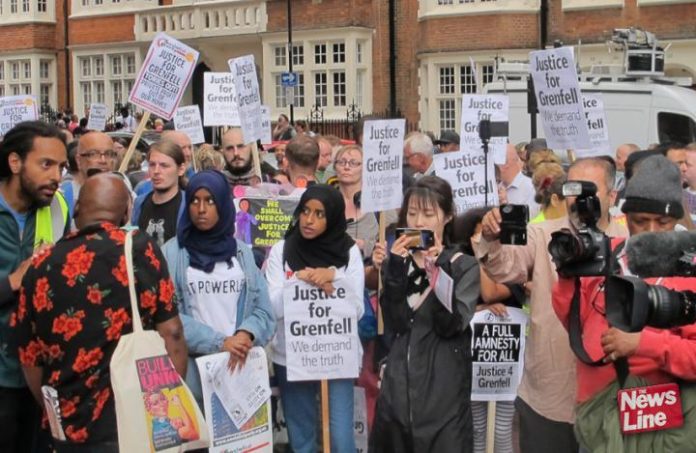 ‘THE NIGHTMARE continues as it was like the first night’, Shah Aghlani, who lost his mother and aunt in the Grenfell fire, said yesterday on the first day of the inquiry into the fire.

Survivors and the relatives of those who had died were further angered by the location of the inquiry, its narrowness and the fact that so few people have been re-housed. Out of the 196 made homeless by the fire to date, only three have been permanently re-housed.

The first day of the hearing was held at the Grand Connaught Rooms in central London, described by Labour MP for Kensington, Emma Dent Coad, as ‘dripping with chandeliers’.

She said that those affected by the Grenfell fire were angry because it was extremely difficult and costly to come all the way from the Grenfell Tower area of west London and attend. To make matters worse, the head of the inquiry former judge Sir Martin Moore-Bick did not take any questions after his opening statement.

Since his appointment, there have been calls from many of the survivors for Moore-Bick, who was chosen by Tory PM May, to stand down. Emma Dent Coad said they needed somebody they can trust, not a ‘technocrat’ who lacked ‘credibility’. She said: ‘We were sitting in a ballroom, dripping with chandeliers. It’s the most incredibly inappropriate place. Clearly, the judge felt perfectly comfortable in a place like this – a lot of people didn’t.’ People feel it was deliberate, to intimidate and make people ‘feel unimportant and looked down on’, she added.

Tomasina Hessel, who lost her home in the blaze, said: ‘The inquiry won’t look at social housing, we don’t think it will look deep enough into the relationship between the tenant management organisation and the Royal Borough of Kensington and Chelsea.

‘I’m not sure it will go in-depth to identify which individuals are responsible for which decisions, which I think is really important if we are going to hold them to account.’ David Lammy, MP for Tottenham whose friend died in the fire, said: ‘People want the bigger questions, the why questions answered… “How was this allowed to happen?” The central questions about the local authority and its huge reserves.

‘Central questions about the companies that were involved in the refurbishment of the building.

‘Big questions for the TMO and the way that they ignored people’s complaints over many, many years. There are big, big questions about how 80 people minimum were allowed to burn and die in this way.’

Professor Richard Hull, Research Co-ordinator and Professor of Chemistry and Fire Science from the University of Lancashire, commented: ‘There is a simple point and that is: From 1666 the Great Fire of London until about the 1950s, it was not permissible to put combustible materials on the side of buildings and then gradually with the growth of plastics people said: “Oh well look architecturally we can make these more attractive looking buildings.” Then you end up with this situation where you have the whole of the side of the building is combustible.

‘Then when a fire goes out of the window it can spread up the whole of the side of the building without stopping it. A very clear answer is if you don’t put combustible stuff on the side of buildings you cannot have disasters like Grenfell happen.’

The following is the first of a two part series on the coroner’s inquest into the 2009 tower block fire at Lakanal House in southeast London, which killed six people. Central and local government ignored the recommendations from the coroner, centred on implementing basic fire safety measures in high-rise buildings. This callous disregard for the safety of the public was a central factor in the Grenfell Tower inferno in west London: here.