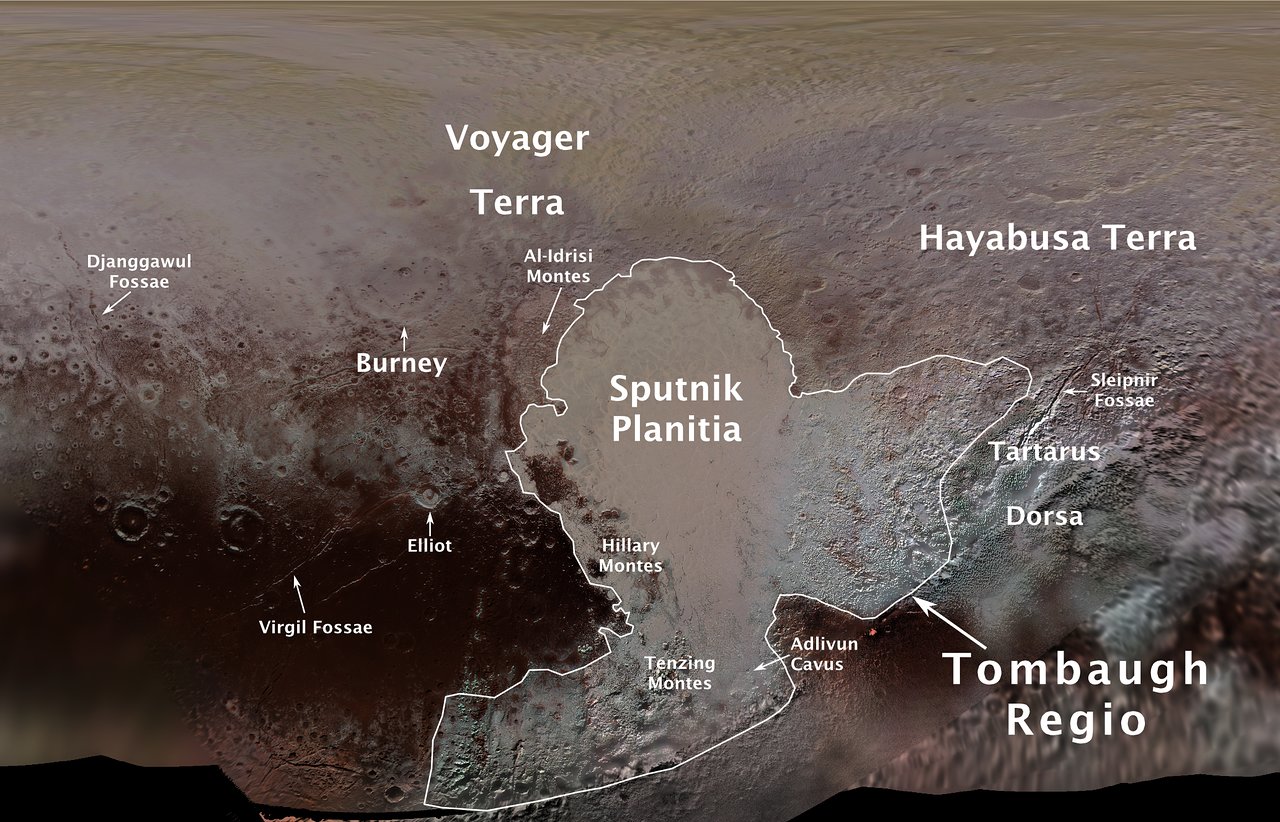 From the International Astronomical Union:

The Working Group for Planetary System Nomenclature (WGPSN) of the International Astronomical Union (IAU) has officially approved the naming of fourteen features on the surface of Pluto. These are the first geological features on the dwarf planet to be named following the close flyby by the New Horizons spacecraft in July 2015.

The IAU has assigned names to fourteen geological features on the surface of Pluto. The names pay homage to the underworld mythology, pioneering space missions, historic pioneers who crossed new horizons in exploration, and scientists and engineers associated with Pluto and the Kuiper Belt. This is the first set of official names of surface features on Pluto to be approved by the IAU, the internationally recognised authority for naming celestial bodies and their surface features.

“We’re very excited to approve names recognising people of significance to Pluto and the pursuit of exploration as well as the mythology of the underworld. These names highlight the importance of pushing to the frontiers of discovery,” said Rita Schulz, chair of the IAU Working Group for Planetary System Nomenclature. “We appreciate the contribution of the general public in the form of their naming suggestions and the New Horizons team for proposing these names to us.”

More names are expected to be proposed to the IAU, both for Pluto and for its moons. “The approved designations honour many people and space missions who paved the way for the historic exploration of Pluto and the Kuiper Belt, the most distant worlds ever explored,” said Alan Stern, New Horizons Principal Investigator from the Southwest Research Institute (SwRI) in Boulder, Colorado.

The approved Pluto surface feature names are listed below.

Sputnik Planitia is a large plain named after Sputnik 1, the first space satellite, launched by the Soviet Union in 1957.

Tenzing Montes and Hillary Montes are mountain ranges honouring Tenzing Norgay (1914–1986) and Sir Edmund Hillary (1919–2008), the Indian/Nepali Sherpa and New Zealand mountaineer who were the first to reach the summit of Mount Everest and return safely.

Al-Idrisi Montes honours Ash-Sharif al-Idrisi (1100–1165/66), a noted Arab mapmaker and geographer whose landmark work of medieval geography is sometimes translated as “The Pleasure of Him Who Longs to Cross the Horizons.”

Djanggawul Fossae defines a network of long, narrow depressions named for the Djanggawuls, three ancestral beings in indigenous Australian mythology who travelled between the island of the dead and Australia, creating the landscape and filling it with vegetation.

Sleipnir Fossa is named for the powerful, eight-legged horse of Norse mythology that carried the god Odin into the underworld.

Virgil Fossae honors Virgil, one of the greatest Roman poets and Dante’s fictional guide through hell and purgatory in the Divine Comedy.

Adlivun Cavus is a deep depression named for Adlivun, the underworld in Inuit mythology.

Hayabusa Terra is a large land mass saluting the Japanese spacecraft and mission (2003–2010) that returned the first asteroid sample.

Voyager Terra honours the pair of NASA spacecraft, launched in 1977, that performed the first “grand tour” of all four giant planets. The Voyager spacecraft are now probing the boundary between the Sun and interstellar space.

Tartarus Dorsa is a ridge named for Tartarus, the deepest, darkest pit of the underworld in Greek mythology.

Elliot crater recognises James Elliot (1943–2011), an MIT researcher who pioneered the use of stellar occultations to study the Solar System — leading to discoveries such as the rings of Uranus and the first detection of Pluto’s thin atmosphere.

Icy volcanoes on Pluto may have spewed organic-rich water. The dwarf planet has short-lived ammonia on its icy surface. By Lisa Grossman, 2:00pm, May 29, 2019.