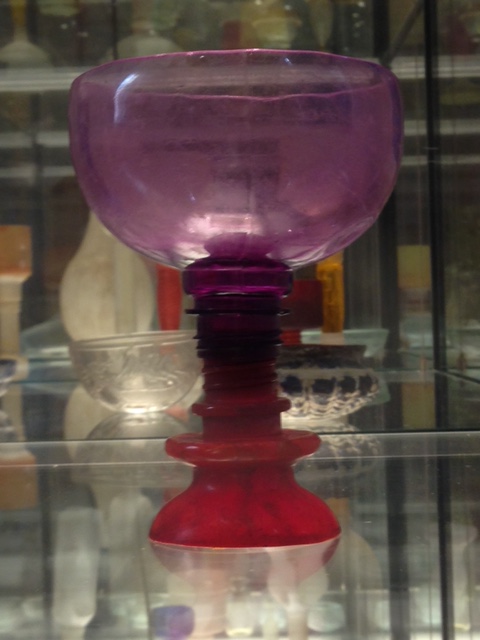 On 26 August 2017, we went to the Casa Romana exhibition in the National Museum of Antiquities in Leiden, the Netherlands. This photo shows glassware at the exhibition. Like the other photo in this blog post, it is a cell phone photo.

The exhibition is until 17 September. The museum writes about it:

Casa Romana provides a surprising introduction to the rich life of the residents of a fashionable Roman town villa. Visitors can look around the villa’s sumptuous interior, following the Romans’ everyday life from morning rituals to bedroom secrets. Countless objects from the museum collection have been incorporated into the rooms furnished for this exhibition, such as a dinner service, glassware, oil lamps, and portrait busts.

Mix of archaeology and modern design

In Casa Romana we see a blend of ancient archaeology and modern design by Studio Job, Tjep., and the garden architect Piet Oudolf, among others, as well as work by artists including Ruud van Empel, Gerd Rohling, Olivier van Herpt, and Teun van Staveren. There is also plenty to delight devotees of architecture. In total, over eight hundred objects are on display: dinner services, delicate glassware, mosaics, marble portrait busts and architectural fragments, jewellery, a silver table leg, roof tiles, children’s toys, and hundreds of small Roman oil lamps.

Interior of a Roman villa

The exhibition shows a sequence of twelve scenes from the private life of a couple from the highest echelons of Roman society and their family. You can follow their fascinating story in an audio tour, written by Brenda Meuleman, the author of the recent novel Het verraad van Julia (‘Julia’s betrayal’). The interiors that go with each stage of the story fully capture the lavishness of Roman villas, with their colourful frescoes and mosaic floors. They were composed using frescoes, film images, and art based on Roman antiquity.

Objects: a mix of items from the museum’s own collection and loans from elsewhere

Most of the Roman objects come from the National Museum of Antiquities’ own collection. They are joined by loans from numerous designers, artists, and antiquarians, as well as from the Royal Collections (The Hague), Museum Boijmans van Beuningen (Rotterdam), the Kröller-Müller Museum (Otterlo), and the Allard Pierson Museum (Amsterdam). The guest curators of this exhibition are the archaeologist and independent researcher Dr Gemma Jansen and Professor Eric M. Moormann and Dr Stephan T.A.M. Mols (the latter both of Radboud University, Nijmegen).

As we were in the museum anyway, we had a look at ancient Greek sculpture.

Including this oil flask in the shape of a rock partridge, from Corinth, about 500-480 BCE.