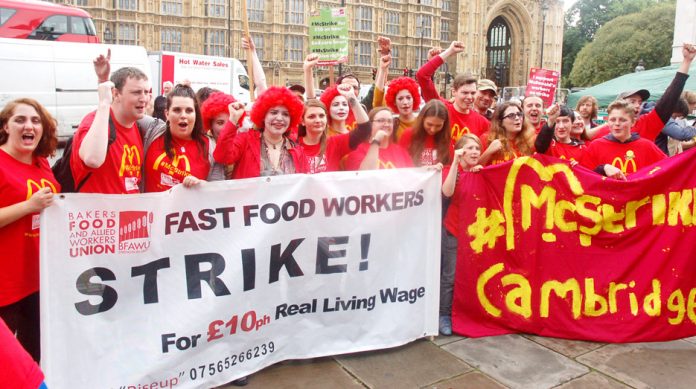 WORKERS at McDonald’s went on strike on Monday for the first time since the burger bar came to the UK in 1974.

About 40 workers from two restaurants in Cambridge and Crayford, south-east London, began a 24-hour strike yesterday over low wages, zero-hours contracts and the refusal of McDonald’s to recognise their union.

McDonald’s strikers from both the Cambridge and Crayford sites then joined a lively rally outside parliament called by the bakers’ union. At the rally, bakers’ union (BFAWU) striker from Cambridge Georgina Taplin told News Line: ‘We were on the picket line from 5.30am this morning and we got a very good response from customers.

‘Lots of cars tooted their horns in support. After today’s strike we are going to keep building and pushing till we get £10 an hour, union recognition and respect in the workplace.’

Striker Lewis Baker, who was on the picket at McDonald’s in Crayford from 6.00am, said: ‘The 20 or so strikers were joined by supporters from Bromley and Lewisham, it was a fantastic turnout.’

Paul Nowak, Deputy General Secretary of the Trades Union Congress, said: ‘McDonald’s along with a number of other fast-food restaurants do not recognise a union. Lets face facts, this is a company which made a profit of a quarter of a billion pounds last year. They can afford to pay a tenner for the people working in their restaurants.

‘McDonald’s need to sit down and negotiate with an independent union and listen directly to the concerns of their workforce. Now one in ten workers in this country are working in vulnerable employment. They are either on zero hours, or short hours contracts for agencies, on casual contracts.

‘That means that there are hundreds of thousands if not millions of people out there who would want to see more secure working contracts, more security in their day-to-day working lives. This is why the government should move to ban zero hours contracts to take exploitation out of our labour market.’

A McDONALD’S boss “laughed in the face” and cut the hours of a worker who told him she had experienced domestic violence, striking staff at the chain’s Crayford restaurant said today.

‘We’re doing this so we can afford the basics in life,’ say striking McDonald’s workers.

“The labour movement can learn a lot from the McDonald’s strikers.

Forty members of the Bakers’, Food and Allied Workers’ Union at McDonald’s branches in Cambridge and Crayford in South East London have voted to strike for these demands, as well as grievances over bullying of union activists by management — with over 95% in favour. Labour, committed to scrap zero hours contracts and a £10 an hour minimum wage, must rally round the strike and help spread its example. Jeremy Corbyn and John McDonnell have both said they support the strike and will be there on 4 September. Cambridge’s Labour MP Daniel Zeichner has pledged to join the picket line and other MPs have stated support, including former McDonald’s worker Laura Pidcock of North West Durham. But we need more, from the whole party and labour movement: here.