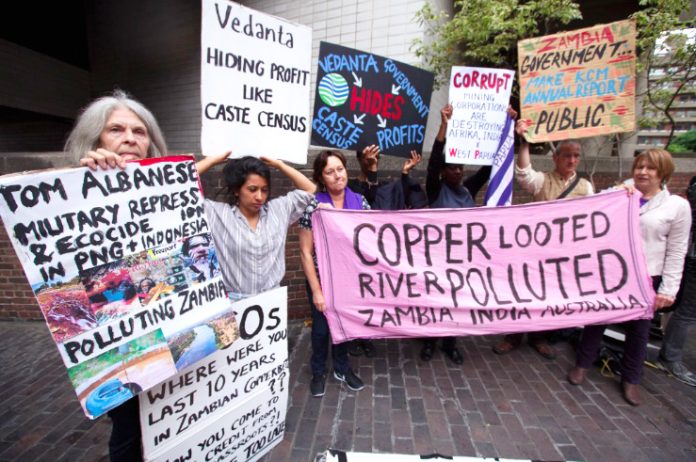 MASSIVE PROTEST ORGANISED FOR THE VEDANTA AGM ON AUGUST 14th!

LOUD and angry protests will again be held outside the AGM of British mining company Vedanta Resources’ AGM at the Lincoln Centre, Lincoln’s Inn Fields, London at 2pm on Monday 14th August.

The demonstrators are accusing the company of major environmental and human rights abuses across its operations. Parallel protests will be held by affected communities and their supporters at several locations in India and Zambia.

Inside the AGM, dissident shareholders will ask questions on behalf of Zambian villagers who are suing Vedanta in the UK for twelve years of polluted water, as well as tribal inhabitants of the Niyamgiri hills in Odisha, India who accuse Vedanta of murdering and harassing them with state collusion.

Protesters in London will pour scorn on Vedanta’s 2017 Annual Report, which claims that the company ‘demonstrates world-class standards of governance, safety, sustainability and social responsibility’. They say it represents a poor attempt to don the ‘cloak of respectability’ of a London listing, pointing out that:

• Vedanta was again excluded from the Norwegian Pension Fund’s investments this year following an investigation which found ‘numerous reports of Vedanta’s failure to comply with government requirements’ at four subsidiaries in Odisha, Chhatisgarh, Tamil Nadu and Zambia.
The report concludes: ‘There continues to be an unacceptable risk that your company will cause or contribute to severe environmental damage and serious or systematic human rights violations.’
• Vedanta’s Annual Report makes no mention of its liabilities relating to the landmark legal case in which 1,826 Zambian farmers have been granted jurisdiction to sue Vedanta in London for gross pollution by its subsidiary Konkola Copper Mines (KCM).
• At the July appeal hearing in the case, Vedanta’s lawyers claimed that the company’s sustainability and human rights reports are only produced for show as a requirement of London Stock Exchange rules.
Instead they claimed Vedanta Resources has very little actual oversight or involvement with subsidiary operations such as Konkola Copper Mines.
• Vedanta are again subject of an international arbitration for withholding $100 million in dividends from Cairn Energy, owner of 9.8% shares in Vedanta-controlled oil company Cairn India.
In December 2016 London courts ordered Vedanta subsidiary Konkola Copper Mines to pay $103 million in withheld dividends to Zambian State entity ZCCM-IH.3.
• The Rajasthani High Court has uncovered a $96 million tax evasion scam in which Vedanta subsidiary Hindustan Zinc Ltd benefited from tax fraud at the hands of shamed IAS officer Ashok Singhvi in 2015.4.
• While their Annual Report claims to respect the right to ‘Free Prior Informed Consent’, Vedanta has not given up its plans to mine the Niyamgiri hills,in Odisha state, eastern India, homeland of the Dongria Kond tribe, despite a unanimous referendum against it by tribal inhabitants in 2013.

In twelve village meetings, the Dongria unanimously rejected the mine, causing the national government of India to refuse the company the necessary clearances. The Odisha State mining company is now claiming that that decision was flawed and is taking the matter to court once again.

They seek to overturn the referendum, claiming it overstepped the provisions of the Forest Rights Act by allowing Palli Sabhas (village meetings) to decide on mining, rather than merely settling their claims.

The Dongria Konds of Niyamgiri will hold a protest before the AGM demanding the dismantling the Lanjigarh refinery, and an end to its illegal expansion. They will also demand the release of Dongria activists from jail, decrying the ongoing abductions, false arrests and State-sponsored murders of tribal activists against Vedanta’s mine.

In May, Kuni Sikaka, a 20-year-old Dongria woman and active Niyamgiri Suraksha Samiti (NSS) member, whose father-in-law is NSS leader Dadhi Pusika, was removed from her home and kept in police jail for three days, where she was told to surrender as a Maoist or be jailed for 15 years.

On 7th April 2016 Dasru Kadraka, a 25-year-old Adivasi youth leader and activist of NSS, was arrested and tortured with electric shocks by police asking him to surrender as a Maoist. An all-female fact-finding team comprising of senior Indian activists detailed these abuses in May 2017.

In September 2016, a group of Dongria Kond had burned down a CRPF (Central Reserve Police Force) camp, opposing construction of a road connecting Niyamgiri to Kalyansingpur, which they claim is to aid Vedanta’s mine plans, and opposing ongoing harassment by the force.

In Zambia, severely polluted villagers will submit questions to be asked by dissident shareholders at the London AGM. Government officials visited their villages in Spring this year asking them to drop the London case against Vedanta and settle out of court with the company.

Samarendra Das from Foil Vedanta says: ‘The UK government and London Stock Exchange are directly responsible for failing to investigate Vedanta’s corporate crimes in Zambia since 2006.

‘The Zambian State’s threats to polluted farmers demonstrate the ongoing colonial power of this British corporation which acts more powerful than the Zambian State.’

Former Rio Tinto CEO Tom Albanese will step down from Vedanta’s board at this year’s AGM along with executives Euan MacDonald and Aman Mehta. Vedanta’s CEO of Zambian operations Steven Din has recently been accused of offering bribes for the Simandou iron ore mine by the former Guinean mining minister, as part of a major corruption investigation. Din was head of Rio Tinto’s Guinean operation at the time the scandal unfolded, while Tom Albanese was CEO.