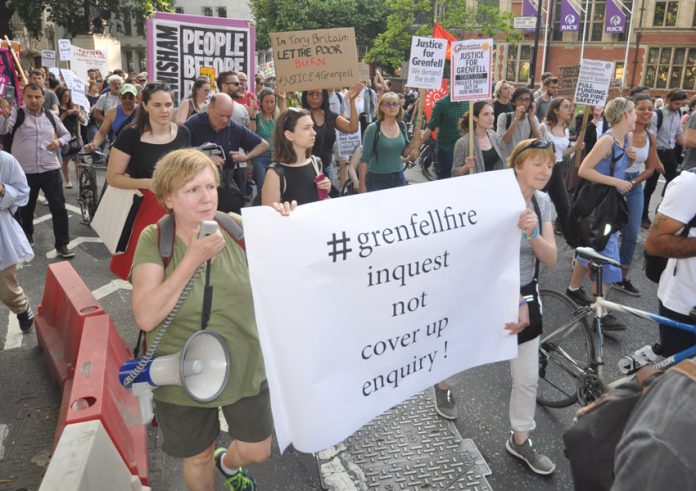 THE FIREFIGHTERS’ union’s submission to the Grenfell Tower fire inquiry demands that cuts to the fire service must be examined to establish the impact that they had on the disaster and whether lives were lost as a result.

The FBU is urging the inquiry team and the government to listen to firefighters, emergency fire control operators and to the FBU itself. The union shares fears of survivors and family members of those who died in the fire that the inquiry will be too narrow.

The firefighters’ union has asked questions about the wider safety regime and how such a devastating incident could even take place. The FBU is urging the government to make the terms of reference for the inquiry as broad as possible, and to focus not just on the London Fire Brigade and Grenfell but on the resources available to all fire and rescue services across the country.

The inquiry also needs to look at available resources in other areas where there is a risk of tower block fires, and at how cuts to the service would impact on any similar incidents. Fire safety checks, building regulations, fire safety legislation, deregulation and national standards are all covered in the FBU’s own submission to the inquiry.

Matt Wrack, FBU general secretary, said: ‘This inquiry needs to have very broad terms of reference if it is to have a real impact on reducing the likelihood of anything like this ever happening again. It needs to look at, for example, the fact that government-funded fire research has virtually disappeared in recent years, all at the very time when new insulation and cladding systems have been introduced.

‘So many factors contributed to make a perfect storm for this horrific incident to happen, and each of them needs to be examined and investigated in turn. ‘Looking at one aspect of risk but leaving others unexplored will be utterly useless. We also want those at the very top – in central government – held to account.

‘Their actions and decisions over recent years need to be thoroughly scrutinised. We urge those who are leading this inquiry to be thorough, to make the inquiry as wide-ranging as possible, and to leave no stone unturned. Anything less would be an injustice to those who died and will do nothing to prevent a second Grenfell.’

The FBU, which has also made an application to be a core participant in the inquiry, hopes that the inquiry will make recommendations following its findings, just as the inquiries into the King’s Cross Station and Bradford City stadium fires did, and to make specific requirements of fire and rescue authorities across the UK and of governments. Meanwhile, after a consultation with members, the Fire Brigades Union (FBU) has said a pay offer from the national employers is ‘inadequate in its current form’.

The national employers offered a 2% increase if the discussions around the work trials continued. A 3% increase would follow (and increases for 2018, 2019 and 2020) but only on the basis that an agreement was concluded on the work trials. There was no guarantee where the funding for the pay increase would come from – particularly problematic given central funding to the service has been cut hugely.

North Yorkshire Fire and Rescue Service has been severely hit by these cuts and the FBU says that as a result lives are being put at risk. The number of emergency control operators has been cut from 22 to 15. The union says that untrained staff are fielding emergency calls from the public and taking down vital information with pen and paper. The information is then passed onto the only fully trained operator on duty who will mobilise a fire engine. Calls are also being diverted to Cornwall at peak periods.

The union warns that on several occasions, fire crews have been sent to the wrong address or delayed for up to 15 minutes before being mobilised. Additionally, operators are frequently forced to work up to 90 hours a week in order to cover staff shortages, the FBU claiming the situation has reached ‘crisis point’.

Secretary of the FBU in North Yorkshire, Steve Howley, said: ‘We have now reached crisis point. The FBU warned management and the fire authority of the dangers that the cuts would have on the ability of the control room to function safely and effectively. Unfortunately, no one listened to our concerns. We were accused of scaremongering. But these are the repercussions of such savage cuts.

‘Long hours, stress and isolation – it is becoming common for one trained operator to be on shift alone – have led to an increase in sickness amongst staff which further compounds the workforce shortages. The chief fire officer and the fire authority need to be held to account for these failings and to get a grip of the situation immediately.

‘They are putting the lives of the public at risk by placing staff under intolerable pressure. In a fire, every second counts and a delayed response can be fatal. Managers are making this more likely with their continued cuts to the service. It is completely unacceptable and must stop.’

The FBU said that government cuts are to blame for a rise in fire-related deaths in England last year, according to the union representing firefighters. Official figures show that 303 people died in fires during 2015/16, up 15% on the previous year.

Response times to all types of serious fires also rose, in some cases by as much as one minute and eight seconds. The Fire Brigades Union said the figures reflect the real impact that cuts have had on the ability of firefighters to do their job in recent years.

Matt Wrack, the union’s general secretary, said: ‘I think fire crews are increasingly angry about how they are being treated by this government. Firefighters are praised when they rescue people, they deal with particularly difficult incidents, but all the time their job is being undermined by cuts. There has been a record number of fire station closures, fire engines being cut and 10,000 firefighter jobs go. So that means people are left running the service on a shoestring.’

• In the wake of the Grenfell Tower fire, Tory Foreign Secretary, Boris Johnson, faces angry criticism over the severe cuts and closure to the fire brigade he introduced when he was London Mayor. Johnson presided over the closure of 10 fire stations and the removal of 27 fire engines and 552 firefighters’ jobs, despite previously promising not to remove them.

Johnson repeatedly denied he had any plans to cut fire engines or fire stations, telling the London Assembly in 2010 that there were ‘no plans’ to remove engines. Pressed on the issue, he said in a filmed meeting that: ‘I don’t want to get rid of them. What’s the problem?’

He was confronted by his opponents on the London Assembly about the broken promise in 2013.

Labour Assembly leader Andrew Dismore asked then-Mayor, Boris: ‘How can cutting fire stations, cutting fire engines and cutting firefighters post not be a reduction in fire cover? You’ve lied to the people of London.’ Boris snapped: ‘Get stuffed,’ – but apologised saying: ‘It just popped out.’

The devastating cuts were implemented in 2014.