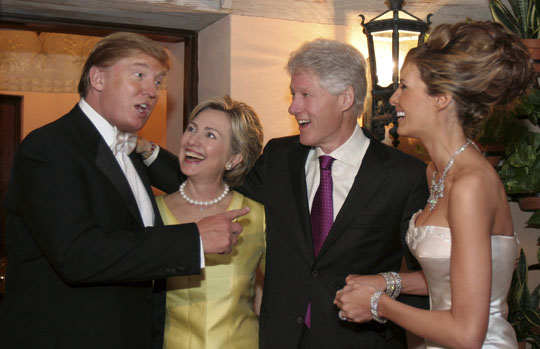 A video from a year before the presidential election in the USA says about itself:

Hillary talks about attending Donald Trump’s wedding and shares her thoughts on his policies.

By Ian Sinclair in Britain:

The neoliberal roots of Clinton’s catastrophe

SINCE Donald Trump was elected President of the United States, the Democratic Party establishment and Hillary Clinton supporters have blamed everyone, including FBI Director James Comey, the Russian government and backers of Bernie Sanders. All except the Democratic candidate herself.

How I Lost puts the spotlight firmly on Clinton, arguing that she blew the election because she is “an economic and political elitist and a foreign policy hawk divorced from the serious concerns of ordinary Americans.”

The book’s wheeze is that Clinton herself is the author. It’s largely based on her own words, taken from her campaign chairman John Podesta’s emails and Democratic National Committee (DNC) emails revealed by WikiLeaks last year.

But Clinton’s authorship is a red herring. It is former Wall Street Journal correspondent Joe Lauria who provides the important context and inconvenient facts — for Clinton anyway — to help the reader make sense of all the leaked information.

The emails paint a picture of Clinton and her team as deeply Machiavellian characters, with her “embrace of centrist neoliberalism” completely out of touch with our turbulent political times.

Journalists are shown to have an extremely cosy relationship with Clinton’s campaign, while emails are presented showing that her entourage, and the Democratic Party establishment, colluded to crush Bernie Sanders’s insurgent campaign to be the nominee for the presidency.

The vice-chair of the DNC sent Clinton’s team advance warning of questions to be asked by the audience in debates between Sanders and Clinton, while its chief financial officer suggested to the committee’s communications manager that Sanders should be challenged about his religious beliefs, which they saw as a potential weakness.

On foreign policy, the emails highlight Clinton as an aggressive military interventionist in Afghanistan, Iraq, Syria and the “shit show” — Barack Obama’s description — that is Libya. Though Clinton publicly called for the US to set up no-fly zones in Syria, in a private 2013 speech to Goldman Sachs [bank] she suggested caution as it would “kill a lot of Syrians.”

So how can Trump and the Republicans be defeated at the next presidential election?

Lauria is clear. The Democrats need to “find a candidate seriously committed to reversing the betrayal of the party’s traditional working-class base and restore the badly eroded New Deal.”

Who that should be is unclear, though one thing is undeniable — it can’t be Clinton or someone with her politics.

HILLARY CLINTON HAD SOME NOT SO KIND WORDS FOR JOE BIDEN AND BERNIE SANDERS IN HER NEW BOOK Sanders has already brushed off the jab, while Biden’s office did not respond for comment. And Seth Meyers had some thoughts of his own to add, including the gem: “Want to blame something ancient? Blame the Electoral College.” [Yahoo]

14 thoughts on “How Hillary Clinton made Trump president”