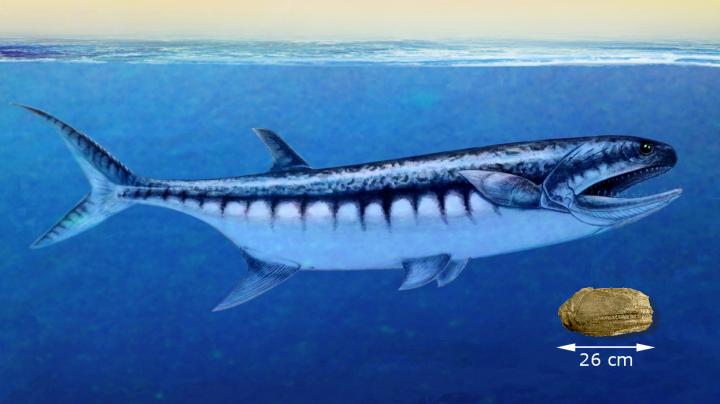 From the University of Zurich in Switzerland:

Summary: The food chains recovered more rapidly than previously assumed after Earth’s most devastating mass extinction event about 252 million years ago as demonstrated by the fossilized skull of a large predatory fish called Birgeria americana discovered by paleontologists from the University of Zurich in the desert of Nevada.

The most catastrophic mass extinction on Earth took place about 252 million years ago — at the boundary between the Permian and Triassic geological periods. Up to 90 percent of the marine species of that time were annihilated. Worldwide biodiversity then recovered in several phases throughout a period of about five million years. Until now, paleontologists have assumed that the first predators at the top of the food chain did not appear until the Middle Triassic epoch about 247 to 235 million years ago.

Swiss and U.S. American researchers led by the Paleontological Institute and Museum of the University of Zurich have discovered the fossil remains of one of the earliest large-sized predatory fishes of the Triassic period: an approximately 1.8-meter-long primitive bony fish with long jaws and sharp teeth. This fish belongs to a previously unknown species called Birgeria americana. This predator occupied the sea that once covered present-day Nevada and the surrounding states already one million years after the mass extinction.

In the United States, almost no vertebrate fossils from the Early Triassic epoch (252 to 247 million years ago) have been scientifically described until now. “The surprising find from Elko County in northeastern Nevada is one of the most completely preserved vertebrate remains from this time period ever discovered in the United States,” emphasizes Carlo Romano, lead author of the study. The fossil in question is a 26-centimeter-long partial skull of a fierce predator, as evidenced by three parallel rows of sharp teeth up to 2 centimeters long along the jaw margins, as well as several smaller teeth inside the mouth.

Birgeria hunted similarly to the extant great white shark: the prey fish were pursued and bitten, then swallowed whole. Species of Birgeria existed worldwide. The most recent discovery is the earliest example of a large-sized Birgeria species, about one and a half times longer than geologically older relatives.

According to earlier studies, marine food chains were shortened after the mass extinction event and recovered only slowly and stepwise. In addition, researchers assumed that the ancient equatorial regions were too hot for vertebrates to live during the Early Triassic. Finds such as the newly discovered Birgeria species and the fossils of other vertebrates now show that so-called apex predators (animals at the very top of the food chain) already lived early after the mass extinction. The existence of bony fish close to the equator — where Nevada was located during the Early Triassic — indicates that the temperature of the sea was a maximum of 36°C. The eggs of today’s bony fish can no longer develop normally at constant temperatures above 36°C.

“The vertebrates from Nevada show that previous interpretations of past biotic crises and associated global changes were too simplistic,” Carlo Romano says. Despite the severity of the extinctions of that time and intense climatic changes, the food webs were able to redevelop faster than previously assumed.