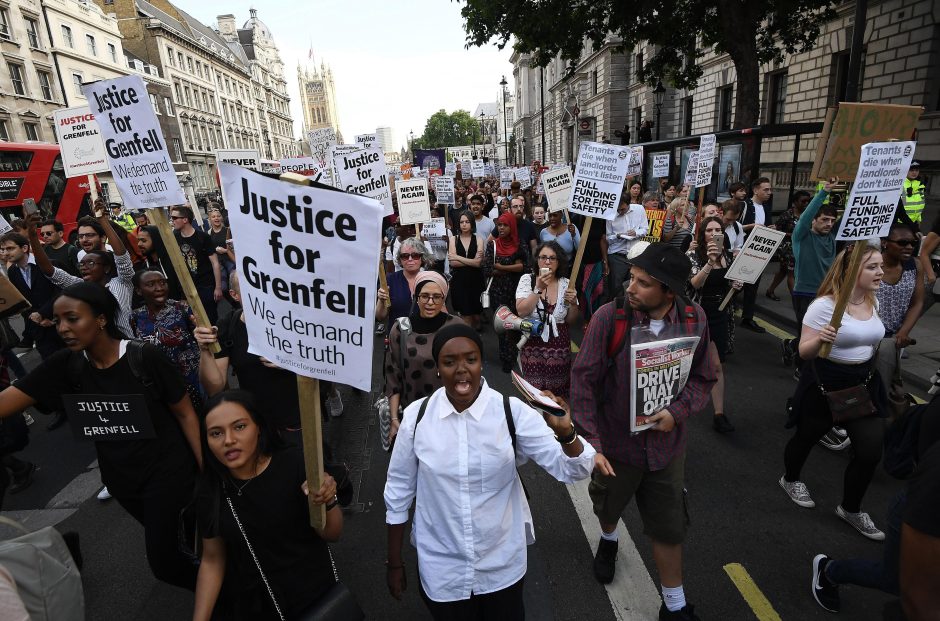 “This is a crime of capitalism against the working class”

Jane, a supply teacher from Kensington and Chelsea borough, condemned the inequality in the area and the social cleansing taking place. “When I first saw the fire on the screen I thought, ‘What have they [the government and council] done?’ I was shocked and I knew straight away that something was strange. I didn’t know at the time about how it started or that there weren’t fire sprinklers, but I’m a local resident and I know about the changes that have been happening. I know that flats around here have been removed and that people have been moved out.”

When asked if she thought that the council and government had deliberately ignored the Grenfell residents’ concerns, Stephanie responded, “Definitely. They didn’t want to spend any more money on the building.

Jane disbelieved the official death toll of 80 people, and criticised the media coverage of the inferno and the police investigation. “It’s so blatant that they’re covering it up. I’m pointing the finger at the council for not seeing what was happening and not caring about the people. What’s even worse is that people were complaining [about the lack of fire safety precautions in Grenfell Tower] way before this happened. They were worried for themselves. It was like a death trap!”

Ray, a bus driver from London, spoke of the experience of a friend of his who had lived in the tower. “I know many people in that building. A friend of mine was lucky to escape; he was on the 10th floor. He was told to stay put, but he said to himself, ‘I’m not staying here. I’m getting out’.

“As he came down to the second floor, his little girl passed out. They were lucky, though, the firemen came in and got them out. His little girl is alive, but is still suffering with her lungs [after inhaling toxic smoke].”

When asked his opinion on the Public Inquiry into the fire called by Conservative Prime Minister Theresa May, Ron responded, “They lie, they lie. This is what it is, it’s about the corporations. Corporations can get away with murder. Us, the average people, we have no chance. We’ve got to pay the price.”

Rhonda, an English as a Second Language (ESOL) teacher, expressed her strong agreement with a WSWS statement she read, “We’ve all been trying to say it and not finding the words, but you’ve put it perfectly and succinctly: a crime of capitalism against the working class.”

Sam is a self-employed yoga teacher. She said, “It is really distressing to watch now five weeks after, it is really upsetting, to the point that you don’t feel any affiliation with the country anymore. I don’t understand, everyone seems to have this same opinion, and yet nothing changes. I wish we were French, maybe a bit more revolution would happen, you know.”

Sam’s husband, Tom, said, “To clad something in a flammable material, is it safe? Just because it is easy and cheap, they also installed the gas pipe up the fire exit. It is a criminal act. It is like pouring petrol on someone. … It is criminal, it is insane.”

Sam said, “One of our children is having nightmares now, and she is worried that the house is going to be on fire all the time. So, I tell her building is protected with fire alarms, etc. And she asks why wasn’t that one. As a 12-year-old, she asks, ‘Explain to me why?’ And I say to her because they don’t care, that is what makes it criminal.”

Paul added, “They are waiting for an excuse to demolish these buildings. Throughout the country, you see the square footage in these cities. And now it is about the money, so they are trying to replace them with expensive flats. They are waiting to say, ‘Oh it is not safe, it is beyond economic sense to repair it, let us demolish it.’ The way it is going to end up is ghettos: one for the rich and one for the rest. The city will change. There will not be any vibrancy.”

Sam denounced the callousness of the Conservative-run Kensington and Chelsea council towards the survivors of the fire, who have still not been even temporarily rehoused nearly five weeks later. “That is what is criminal also, the aftermath and the after care. There are so many elements of criminality. They just don’t care and want to get rid of the poor and the immigrants.”

Speaking about the pervasive social inequality in the capital, Paul said, “Who would have thought that the food banks would be relied upon so much? When we were at primary school, they stopped school milk in those days. Before that, everyone had a third of a pint of milk every day. Some kids now don’t even get that.”

Sam and Paul had to leave London to live in Brighton. Paul, a self-employed ceramics maker, said, “I am putting in 70 hours a week and I am exhausted. I am never going to stop working. That is it.”

Sam said, “You work hard and for years. But we can’t afford a three-bedroom flat with my daughter, because of the child care cost.”

USA: A group of Gatlinburg residents are organizing opposition to efforts by the Mayor and City Commission to stifle discussion of the response to a wildfire that killed 14 people late last year: here.