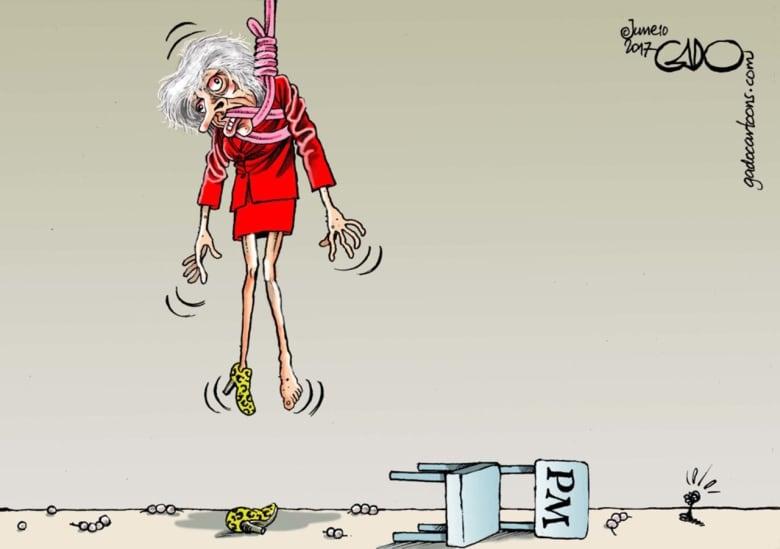 A video from Britain used to say about itself:

Theresa May was caught off guard during a Facebook Q&A session when ‘Jeremy from Islington’ sent in a question.

Of course, it was Labour leader Jeremy Corbyn, who wrote in to challenge the chicken Tory leader to debate him head to head.

Mrs May was answering questions from the public during an online session – after she refused to take part in ITV’s leaders debate to be held on Thursday.

Mr Corbyn wrote: “Hi Theresa May, as Prime Minister you have served your elite friends by giving them tax cuts while wages have stagnated, house-building is at its lowest since the 1920s, there are 20,000 fewer police on our streets since 2010 and the NHS is in crisis.

“Do you not think the British people deserve to see us debate, live and on TV?

But Mrs May dismissed the idea of politicians going head to head.

By Peter Frost from Britain:

Whose side is Facebook on? Not yours or mine!

The platform was paid a fortune to get Theresa May a Tory victory but failed miserably and it seems like it won’t save her as Prime Minister for much longer, believes PETER FROST

Facebook made 250 million dollars in the US presidential election. It also made a huge amount in the run-up to Britain’s general election but it is keeping secret exactly how much and who it was working for.

I thought it would be worth taking a look at this huge worldwide “big brother” of an organisation and how it tries to influence the way you and I vote. It is a murky pit in which to try to find the information you need. Not really what you would expect from something that says its business is easy communication.

Just before our election an investigation by the BBC programme Panorama revealed the Machiavellian use that Theresa May and her Tory gang were making of Facebook and other parts of what I have taken to calling the anti-social media.

Clearly May didn’t get value for money.

Do you use Facebook? I do. I find it an amusing and convenient way of sharing messages, news, jokes and lots more with relatives, friends, comrades, other writers from the Morning Star and fellow fans of the people’s paper.

I find Facebook adverts and the way they are so obviously targeted to my interests and statistics sometimes amusing, sometimes annoying and even sometimes rather embarrassing.

If you are an old man like me — they know my age — and look at a lot of Russian websites, which you might very well if you are interested in the 100th anniversary year of the Russian Revolution, the algorithms of Silicon Valley might decide what you are really looking for are Russian prostitutes or mail-order Moscow brides. Well that’s my story, your honour, and I’m sticking to it.

Once I had managed to get rid of ads for Olga and her mates they changed to rather a lot of patent medicines, herbal viagra and rather too many funeral plans and undertaker’s special offers. Frankly I’d have been happier with Olga.

Just as amusing and annoying as this mis-targeted advertising is the curious lack of responses that Facebook allows to messages. If a Facebook friend sends me a bit of news it only offers only four ways I can deal with it.

Recently a Facebook friend reported that she had tripped outside her house and fallen badly grazing her knees and elbows.

Before you could say Mark Zuckerberg there were 30 plus of her friends reporting they liked the fact she was sprawled on the pavement covered in dirt and blood. Funny use of that word “like,” I think.

In the days running up to our election I found a remarkable number of posts singing the praises of one Theresa May and others warning me about the dastardly behaviour of Jeremy Corbyn.

Ukip, Liberal Democrats and a few others also came uninvited into my pages.

One thing I never found the slightest bit amusing about Facebook was the regular sprinkling of racist, homophobic, xenophobic and just generally reactionary comments and so-called jokes that arrive and have to be deleted every day.

One of the worst offenders was the racist gang that calls itself Britain First. They told Panorama (BBC) that they paid FB to repeatedly promote their videos. Britain First now claims 1,616,519 Facebook supporters. In fact its real membership would fit comfortably in a G4S prison bus.

Britain First fooled many people into liking them. Messages showed starving dogs, appeals to support British soldiers abroad and even Lee Rigby, the army drummer murdered by terrorists in Woolwich. Rigby’s family demanded they stop using his name and image wanting nothing to do with them.

One person who did seem to be either a genuine member or supporter of Britain First of course was Thomas Mair who murdered Labour MP Jo Cox.

Panorama discovered that rabid racists like Britain First were not the only ones buying political influence via Facebook. So are mainstream sophisticated political campaigns, parties and even individuals seeking high office.

They pay Facebook to use our data and the contents of our FB pages to target us for support, funds and votes.

In the EU referendum Panorama revealed that both sides used Facebook. The targeting was amazingly precise. For example Cornish fishermen were messaged telling them if they voted to leave, they would be able to change fishing industry regulations.

May’s advisers knew this only too well and were putting some of their millionaires’ donations to use buying targeted Facebook space. We will never know just how much they spent.

Meanwhile thousands of Labour and Corbyn supporters were using Facebook and other social media for free.

Donald Trump’s presidential campaign relied on Facebook massively. Neither Trump nor Facebook are saying how much was spent but independent experts put the cost at many millions of dollars.

It wasn’t just Trump. Facebook admits taking cash from both Republicans and Democrats, its employees helped out in both party headquarters steering the social media arm of the campaigns.

Facebook, no doubt, played a pivotal role in our general election, yet it is almost totally unregulated and unaccountable. Sometimes, it seems, almost invisible.

In the US all kinds of totally unfounded accusations were made about Hillary Clinton including of criminal acts right up to murder.

Corbyn has had almost exactly the same attacks, in his case mostly linking him to various terrorist actions. Diane Abbott suffered even more rabid and virulent attacks but she is a woman and black.

Facebook was consistently tardy in taking down these fake news stories indeed, some of them still pop up on it today. FB offers the excuse that it doesn’t want to censor the internet.

Yet a post I put up telling people my local Tory MP was both a landlord and had voted against a law requiring landlords to make their properties suitable for human habitation disappeared from my FB page within minutes.

Facebook were paid a fortune to get a Tory victory on May 8 but it didn’t work and it seems like it won’t save her as Prime Minister for much longer and for that we can all be grateful.